As more western hummingbirds are spotted in the East each winter, some scientists suggest that new migratory routes are evolving 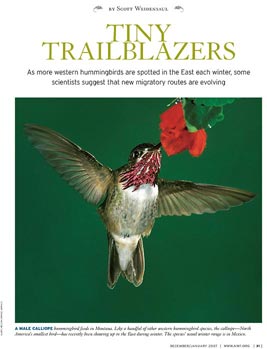 EVERYONE KNOWS that hummingbirds, at least in the East, are creatures of summer—those dazzling, iridescent flashes of color that sum up the warmth and richness of the season. So who but a fool would be looking for a hummingbird on a frigid day in late December, a skiff of fresh snow on the hills of central Pennsylvania and the air nose-nipping cold? Yet as a volunteer for the nonprofit Hummer/Bird Study Group, that was my quarry, and I soon spotted it: a female rufous hummingbird glittering green in the morning sun, probing with her long bill some wrinkled, mushy apples that still clung to one gnarled, snow-dusted tree.

Like that rufous, a growing number of hummingbirds ordinarily found in the West are turning up in eastern states during the winter. Rufous hummers from the Pacific Northwest are the most common, but birders are also seeing calliope hummingbirds from the northern Rockies, black-chinned hummingbirds from throughout the West and buff-bellied hummingbirds from south Texas and Mexico. Along the Gulf Coast, they are reporting thousands of these western hummers each winter, and birders even in states as far north as Pennsylvania and Massachusetts are finding dozens.

Once, these rarities were dismissed as oddball vagrants, hopelessly lost and (everyone agreed) certainly doomed. But in recent years, thanks to pioneering researchers who have ignored conventional wisdom, we’re learning that these “lost” hummingbirds are actually surviving the winters easily, returning year after year. The birds may even represent the leading edge in the evolution of entirely new migratory paths.

“It’s clear that we have already witnessed an historic change in the winter range of rufous, black-chinned, calliope and buff-bellied hummingbirds,” says ornithologist Van Remsen of Louisiana State University, who has been studying the phenomenon for several years. Once rare in the Southeast, it’s not unusual now to find all four species in a single, flower-rich neighborhood along the Gulf Coast in Baton Rouge, Remsen says. He adds that broad-tailed and broad-billed hummingbirds are beginning to show similar winter range expansions.

To detect such changes, ornithologists first need to catch some of the birds. As one of about 200 federally licensed hummingbird banders in the United States and Canada, I am among those who are tracking the western hummers’ movements in the East. Most of my attention focuses on the rufous hummingbird, the most common winter-fall species in the Mid-Atlantic where my colleagues and I work.

It was a report of a rufous that had drawn me to a backyard just south of Harrisburg, Pennsylvania. I had set up a cage trap baited with a sugar-water feeder on the owner’s porch. Right on cue, the hummer showed up, bright green with a touch of orange on her sides and tail. At first she ignored the feeder, concentrating instead on the old apples—probing them repeatedly for the juice inside, or perhaps for cold-numbed insect larvae—but she finally zipped into the trap. Ten minutes later—weighed, measured and outfitted with a tiny numbered band around her right leg—she was free again, one of a half dozen hummingbirds I’d banded that season. 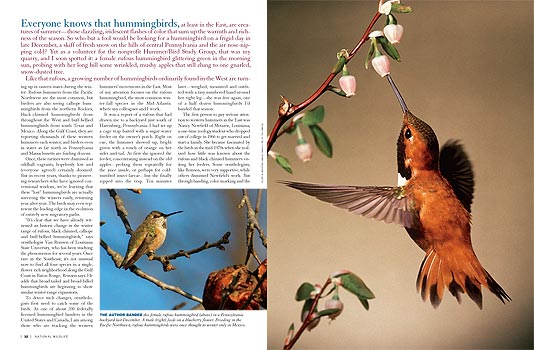 The first person to pay serious attention to western hummers in the East was Nancy Newfield of Metairie, Louisiana, a one-time zoology student who dropped out of college in 1966 to get married and start a family. She became fascinated by the birds in the mid-1970s when she realized how little was known about the rufous and black-chinned hummers visiting her feeders. Some ornithologists, like Remsen, were very supportive, while others dismissed Newfield’s work. But through banding, color-marking and the observations of other hummingbird enthusiasts across the Gulf region, Newfield was soon able to show that hundreds of rufous, Allen’s, black-chinned, buff-bellied and other western hummers were wintering successfully along the coast, many returning each year.

With training and inspiration from Newfield, other eastern birders joined the hunt for western hummers. Like me, many are affiliated with the Alabama-based Hummer/Bird Study Group, directed by hummingbird researchers Bob and Martha Sargent. Retired fighter pilot Fred Bassett, for example, spends most of the winter chasing hummingbirds across southern Alabama and northern Florida. Last winter, he banded 173 hummers of 8 species, including 90 rufous hummingbirds and the first Costa’s hummingbird (a species of the desert Southwest) ever documented in the East.

Thanks to banding, we now know that at least some of these hummingbirds are making immense annual migrations to return to the same backyards every year. Some of the birds Bassett catches in Florida and Alabama are back for their fifth or sixth winter. In November 2001, Mary Gustafson, then a biologist at the federal Bird Banding Laboratory in Laurel, Maryland, banded a female rufous hummer in a yard near Richmond, Virginia. In August 2002, Ned and Gigi Batchelder caught the same bird at their banding station in southern Montana; four months later, it was back in the same Virginia yard, having completed a round-trip migration of 2,400 miles.

Discovering the routes these birds take is one of our biggest challenges. Once, ornithologists assumed that hummingbirds discovered along the Gulf Coast in winter had simply migrated too far east of their normal route and then ended up on the Gulf Coast instead of Mexico. Remsen, however, has proposed that most of the wintering hummingbirds in the East first complete part of their fall migration, from the western United States into northeastern Mexico, but for unexplained reasons then move northeast instead of southwest. Another possibility is that the birds may be drifting east in late summer, then migrating south through the Northeast and Midwest as cold weather arrives. Some recaptures of banded birds support this hypothesis, “but the major problem is numbers,” Remsen says. “A single hummer haven in south Louisiana may record more individual western hummers in a good year than all of the eastern states north of the Gulf Coast combined.” Banders chasing the birds across the Northeast are hoping to fill that data gap.

Whatever the hummers are doing, it is not a conscious decision, because migration is largely a matter of genetics. A bird is, in effect, “programmed” by its genes to travel in a certain direction at a certain time of the year, and some birds—born with a hiccup in their software—head the wrong way. In the past this might have been fatal, but those heading east now find a land of milk and honey, where the ancient forests have been replaced by fields and homes (many with feeders) and where the climate is milder than it was just a generation ago. These birds, in turn, head back to the breeding grounds in spring and spread their “faulty” genes among the population. 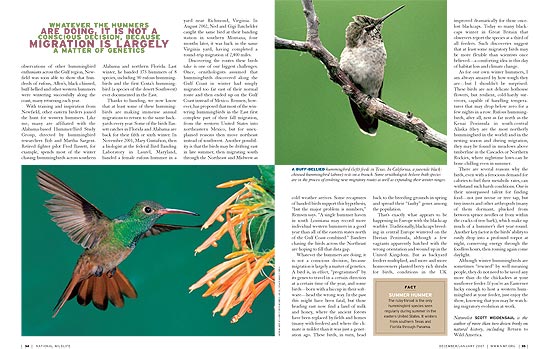 That’s exactly what appears to be happening in Europe with the blackcap warbler. Traditionally, blackcaps breeding in central Europe wintered on the Iberian Peninsula, although a few vagrants apparently hatched with the wrong orientation and wound up in the United Kingdom. But as backyard feeders multiplied, and more and more homeowners planted berry-rich shrubs for birds, conditions in the UK improved dramatically for those once-lost blackcaps. Today so many blackcaps winter in Great Britain that observers report the species at a third of all feeders. Such discoveries suggest that at least some migratory birds may be more flexible than scientists once believed—a comforting idea in this day of habitat loss and climate change.

As for our own winter hummers, I am always amazed by how tough they are—but I shouldn’t be surprised. These birds are not delicate hothouse flowers, but resilient, cold-hardy survivors, capable of handling temperatures that may drop below zero for a few nights in a row. Rufous hummingbirds, after all, nest as far north as the Kenai Peninsula in south-central Alaska (they are the most northerly hummingbird in the world) and in the nesting season and during migration, they may be found in meadows above timberline in the Cascades or Northern Rockies, where nighttime lows can be bone-chilling even in summer.

There are several reasons why the birds, even with a ferocious demand for calories to fuel their metabolic rates, can withstand such harsh conditions. One is their unsurpassed talent for finding food—not just nectar or tree sap, but tiny insects and other arthropods (many of them dormant, plucked from between spruce needles or from within the cracks of tree bark), which make up much of a hummer’s diet year-round. Another key factor is the birds’ ability to easily drop into a profound torpor at night, conserving energy through the foodless hours, then rousing again come daylight.

Although winter hummingbirds are sometimes “rescued” by well-meaning people, they do not need to be saved any more than do the chickadees at your sunflower feeder. If you’re an Easterner lucky enough to host a western hummingbird at your feeder, just enjoy the show, knowing that you may be watching migratory evolution at work.

Naturalist Scott Weidensaul is the author of more than two dozen books on natural history, including Return to Wild America.

A Sense of Timing

Just like a big-brained elephant, a hummingbird, apparently, never forgets.

To test the memory skills of rufous hummingbirds in the Canadian Rockies, biologist T. Andrew Hurly of the University of Lethbridge in Alberta set up arrays of eight artificial flowers filled with a sugar-water solution. Each time a bird visited a flower patch to drink nectar, Hurly and his colleagues refilled half the flowers 10 minutes later and the other half 20 minutes later. Following an initial experience with this pattern, a hummingbird returned to each flower at the appropriate time, either 10 or 20 minutes after the previous visit. “The hummingbirds behave as if they have eight separate stopwatches in their brain,” says Hurly.

That ability may be key to the birds’ survival. Given their tiny size and hyperactivity—about 1,000 heart beats per minute—hummingbirds need a constant source of energy, drawing nectar from hundreds of flowers a day. Flowers recharge nectar supplies at varying rates, however, and if a bird revisits a flower that’s still dry, it will waste precious energy.

The research, published in Current Biology, supports the idea that animals have a sense of what scientists call “interval timing”—the capacity to remember “when” as well as “where.” Although several laboratory studies have supported the hypothesis, Hurly’s work is among of handful of studies of wild animals. A different group of researchers has found that scrub jays also can remember where and when they hide food that will go bad if not eaten by a certain date.

Hurly says he occasionally conducts similar experiments on his students. “I give them candy,” he says. “My students’ brains are 7,000 times larger than a hummingbird’s but they perform no better than hummingbirds at remembering which feeding site they have visited.”—Laura Tangley

"The Hummingbirds of Winter"—Across the Southeast, volunteer banders and backyard birders team up to study apparent shifts in the cold-weather ranges of several hummingbird species
"Creating a Haven for Hummingbirds"—Use feeders and flowers to attract these avian pollinators to your garden
Photo of the Week: Rufous Hummingbird
Support Conservation: Adopt a Ruby-Throated Hummingbird