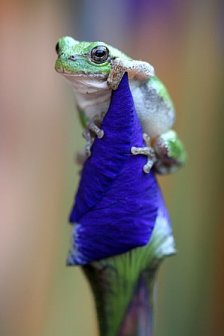 At least one-third of the world's amphibians face extinction due to threats such as disease, habitat loss and pollution. Zoos and aquariums around the globe have declared 2008--a leap year, fittingly--the Year of the Frog, joining NWF and other conservation organizations in an effort to focus attention on the plight of these valuable and vulnerable animals.

"Frogs and toads are extremely susceptible to environmental and biological hazards," says Jessica Jones, NWF's coordinator for FrogWatch USA™. "The permeable nature of amphibians' eggs and skin leave them open to assault from the outside world." FrogWatch USA, a citizen science effort run jointly by NWF and the U.S. Geological Survey, trains volunteers to monitor frog and toad habitat by listening for the calls of different species and recording the findings. Last year, more than 500 volunteers made 4,572 visits to sites around the country. The data gathered by those volunteers is used to evaluate the status of the amphibians and to determine conservation strategies.

"The FrogWatch program has two goals: to collect as much scientifically accurate data about the ranges of frogs and toads as possible and to educate the public in the process," says Jones. This year, working with the Association of Zoos and Aquariums (AZA), FrogWatch USA plans to host volunteer training sessions at more than 20 U.S. aquariums, zoos and nature centers. The Federation's Year of the Frog activities will culminate on May 3 with Record the Ribbit 2008, when volunteers throughout the country will turn out simultaneously to listen for frog and toad calls in nearby ponds and wetlands.

"National Wildlife Federation believes that just about everyone can take part in collecting information about the world we live in by becoming a better observer, developing some of the basic skills needed to collect data and reporting it online," says NWF Chief Naturalist Craig Tufts, who directs NWF's citizen science initiatives. "In the process, they get outside and learn firsthand so much about the natural world around us."

Scientists have noted the precipitous decline in frog and toad populations for many years but are just now starting to understand what may be the animals' greatest threat: Bd, short for Batrachochytrium dendrobatidis, a deadly fungus now found on every continent but Antarctica that attacks the amphibians' skin and nervous systems.

For more information on FrogWatch USA, including tips on how to identify the best frog-watching sites and how to make a yard inviting to frogs and toads, visit our Wildlife Watch section.

SHARE YOUR FEEDBACK
Tell us what you think about the articles in this issue. Send letters to "Reader's View," National Wildlife, 11100 Wildlife Center Drive, Reston, VA 20190. Or email comments to pubs@nwf.org.

REDUCE CLUTTER
Tired of sifting through unwanted mail? A free online service gives you the power to decline catalogs you no longer want to receive--and help the environment. Visit www.catalogchoice.org.

A recent NWF poll showed 80 percent of the nation's hunters and anglers agree that the United States should be a world leader in addressing global warming. That's because "they're on the frontlines," says Claudia Malloy, NWF's national outreach director. "They're outdoors, already seeing changes in climate and the effects such have on wildlife and wild places."

In 2007, NWF, with help from its affiliates, launched a campaign to mobilize these sportsmen, encouraging them to be spokespeople and to engage lawmakers and others on global warming. To date, thousands of hunters and anglers have attended presentations outlining solutions for reducing greenhouse gas emissions and mitigating impacts of climate change on habitats--information many participants have shared with public officials and local media, says Malloy. In addition, more than 600 sportsmen's groups across the country have signed on to a letter urging Congress to take action to confront climate change.

At its annual awards ceremony in February, the Natural Resources Council of America recognized NWF's outreach to sportsmen as the "Best Grassroots Project." For more, see www.targetglobalwarming.org. 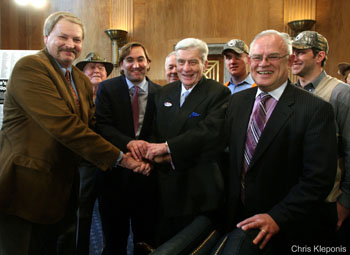 In 1938, President Franklin D. Roosevelt helped NWF launch its first National Wildlife Restoration Week celebration. Held annually ever since, National Wildlife Week (as it is now known) is the Federation's longest-running education program. Celebrities such as Shirley Temple have served as honorary chairs over the years, promoting clean water, endangered species protection and other topics. Though themes regularly change, the event's original purpose remains true: "For uniting the efforts of all friends of outdoor America to the end that future generations shall have their rightful heritage of wildlife."

Getting active outdoors is the focus of this year's National Wildlife Week, celebrated April 19–27. Local, regional and national partners, including NWF affiliates and Youth Service America, will offer nature-oriented service opportunities throughout the week. And tips to help individuals, schools and community groups develop their own projects are available at the Volunteer section. Watch lists providing descriptions of basic flora and fauna for each state also are available online. These resources are designed to help participants identify species in their neighborhoods and report their findings on the NWF website. See the Wildlife Watch section.

FIGHTING FOR PUBLIC ACCESS
NWF and its Buckeye State affiliate, the League of Ohio Sportsmen, have appealed a lower court decision blocking citizens' access to the shores of Lake Erie. The ruling, which goes against more than 100 years of Ohio legal precedent, redefines the boundary separating public and private property along the Lake Erie shoreline from the ordinary high water mark to the point at which the water meets land from moment to moment--effectively barring citizens from the shores unless they are in the lake itself.

"We are filing this appeal to protect the historic right of all citizens to stroll, fish and recreate along the shores of Lake Erie," says Neil Kagan, senior attorney for NWF. "The law is clear: The Lake Erie shoreline is a public trust for all to enjoy."

SCIENTISTS CALL ON CONGRESS
At a news conference in January at the National Press Club in Washington, D.C., NWF released a letter signed by more than 600 scientists from across the nation calling on Congress to pass legislation that will curb America's global warming pollution and help protect wildlife and other natural resources threatened by climate change.

A NIGHT WITH MOTHER NATURE
Families don't need to travel to exotic locales to experience the great outdoors and the wonders it has to offer. They just need to step out of their back doors, says NWF. To encourage such nature exploration, the Federation is inviting folks from across the country to participate in its annual Great American Backyard Campout™ on June 28.

CARBON-NEUTRAL FISHING CONTEST
NWF and the Florida Wildlife Federation were among the sponsors of the world's first-ever carbon-neutral fishing contest in January. The tournament used a portion of its proceeds to offset about 200 tons of carbon dioxide emissions. The funds will be used to convert methane gas from dairy farms into electricity. "Sportsmen know climate change threatens the fish we love and the habitats they live in," says Dan Kipnis, tournament organizer and NWF global warming ambassador. "Offsetting our emissions is just one way to show we're not going to pass the buck to the next generation of anglers."

NEW HOMES FOR LOUISIANA WILDLIFE
Being far away didn't hinder Illinois volunteers from supporting NWF's coastal Louisiana restoration efforts. McLean County fairgoers helped area woodworkers assemble more than 200 wood duck boxes for the Federation, which were transported south by truckers. Installing the nesting boxes will be one of several habitat rehabilitation activities carried out by on-the-ground volunteers through June. If you'd like to lend a hand, visit our Luisiana section or call 225-346-6945. 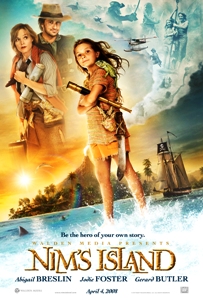 
NWF is partnering with Walden Media to provide educational outreach for the movie Nim's Island, starring Abigail Breslin and Jodie Foster, which opens April 4 in theatres nationwide. The family movie tells the fictional story of Nim, a young girl who, with the help of her animal friends, seeks to rescue her scientist father who is lost at sea and save her secluded island home. "We hope this story inspires people to find the courage, like Nim, to become real-life conservation heroes," says Carey Stanton, NWF's senior director of education and integrated marketing. NWF helped create the Nim's Island educator guide, online resources and programs that will reach millions of children and their classrooms. NWF is also participating in an Animal Planet television special, airing April 2, that features Jeff Corwin and actors from the movie.

At NWF, safeguarding at-risk wildlife is a priority--and a cause to be celebrated. On Endangered Species Day, May 16, the Federation will join forces with groups across the country to raise awareness of the threats imperiled species face and the everyday actions that individuals can take to protect rare plants and animals. "The more people learn about imperiled wildlife, the more they want to help," says John Kostyack, executive director of NWF's wildlife conservation campaigns. Events at participating schools, government agencies and nonprofits will also highlight success stories, tales about the recovery of species once thought doomed to extinction. Visit our Endangered Species section.

STATE AFFILIATES: HOW YOU CAN GET INVOLVED
NWF affiliates are autonomous, statewide, nonprofit organizations that take the lead in state and local conservation issues and also partner with NWF to conduct grassroots activities on national issues. There are currently 47 affiliates, including those in the Virgin Islands and Puerto Rico. To learn how you can get involved with projects in your state, contact your affiliate. Visit our Affiliates section.