In Bavaria, a team of industrious scientists uses high-tech tools to study the secret lives of honeybees--work that could shed light on the pollinators' mysterious disappearances 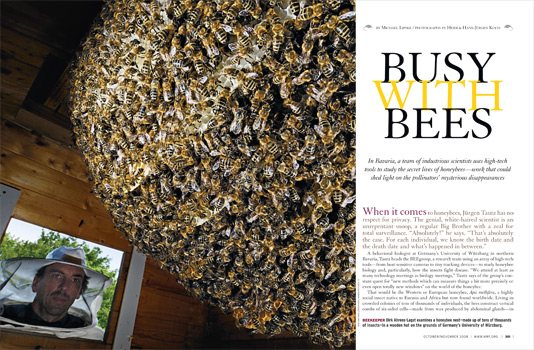 WHEN IT COMES to honeybees, Jürgen Tautz has no respect for privacy. The genial, white-haired scientist is an unrepentant snoop, a regular Big Brother with a zeal for total surveillance. "Absolutely!" he says. "That's absolutely the case. For each individual, we know the birth date and the death date and what's happened in between."

A behavioral biologist at Germany's University of Würzburg in northern Bavaria, Tautz heads the BEEgroup, a research team using an array of high-tech tools--from heat-sensitive cameras to tiny tracking devices--to study honeybee biology and, particularly, how the insects fight disease. "We attend at least as many technology meetings as biology meetings," Tautz says of the group's constant quest for "new methods which can measure things a bit more precisely or even open totally new windows" on the world of the honeybee.

That would be the Western or European honeybee, Apis mellifera, a highly social insect native to Eurasia and Africa but now found worldwide. Living in crowded colonies of tens of thousands of individuals, the bees construct vertical combs of six-sided cells--made from wax produced by abdominal glands--in which they rear their young and store pollen and honey. Though both beeswax and honey are valued by humans, it is the bees' pollination of our crops--required for plants to set fruit or seed--that has made them the third most economically important domestic animal (after cattle and pigs) in Europe and the United States, according to Tautz.

In the United States alone (where Apis mellifera was first put to work by colonists at Jamestown in 1622), the industrious insects pollinate about one-third of our crop species--from soybeans to strawberries. Overall, honeybees contribute roughly $15 billion a year to the U.S. economy.

"When bees are healthy, people are happy," says Tautz. But lately, some honeybees have seemed anything but healthy. For the past two years, many North American beekeepers have reported abrupt disappearances of all adult bees from colonies, with some losing bees in as many as two-thirds of their hives. Researchers have dubbed the phenomenon Colony Collapse Disorder (CCD). Though U.S. beekeepers have been hardest hit by CCD, apiarists in Europe have reported similar honeybee problems. 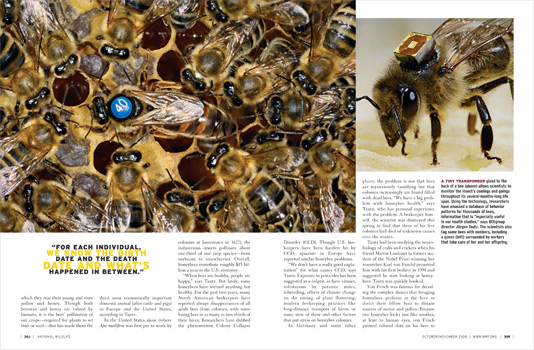 "We don't have a really good explanation" for what causes CCD, says Tautz. Exposure to pesticides has been suggested as a culprit, as have viruses, infestations by parasitic mites, inbreeding, effects of climate change on the timing of plant flowering, modern beekeeping practices like long-distance transport of hives, or some stew of these and other factors that put stress on honeybee colonies.

In Germany and some other places, the problem is not that bees are mysteriously vanishing but that colonies increasingly are found filled with dead bees. "We have a big problem with honeybee health," says Tautz, who has personal experience with the problem. A beekeeper himself, the scientist was dismayed this spring to find that three of his five colonies had died of unknown causes over the winter.

Tautz had been studying the neurobiology of crabs and crickets when his friend Martin Lindauer (a former student of the Nobel Prize-winning bee researcher Karl von Frisch) presented him with his first beehive in 1994 and suggested he start looking at honeybees. Tautz was quickly hooked. Von Frisch was famous for decoding the complex dances that foraging honeybees perform at the hive to direct their fellow bees to distant sources of nectar and pollen. Because one honeybee looks just like another, at least to human eyes, von Frisch painted colored dots on his bees to help him tell them apart and track their activities.

Tautz and the BEEgroup scientists came up with another solution to the problem of look-alike bees, one that is revolutionizing the study of social insects. They glue tiny transponders to the backs of bees in their research colonies, allowing the scientists to compile individual insect biographies--or movement profiles--spanning the several months of an average honeybee life cycle. At around 2.5 milligrams the radio frequency identification (RFID) chips are but a small burden to a bee (an adult honeybee weighs in at around 70 milligrams). But they hold huge promise for unlocking secrets of bee behavior. 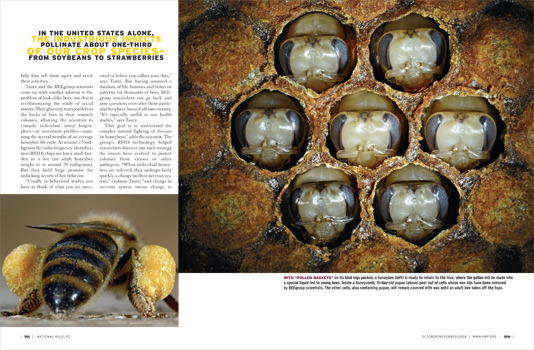 "Usually in behavioral studies you have to think of what you are interested in before you collect your data," says Tautz. But having amassed a database of life histories and behavior patterns for thousands of bees, BEEgroup researchers can go back and pose questions even after those particular bees have buzzed off into eternity. "It's especially useful in our health studies," says Tautz.

"Our goal is to understand the complex natural fighting of diseases by honeybees," adds the scientist. The group's RFID technology helped researchers discover one such strategy the insects have evolved to protect colonies from viruses or other pathogens. "When individual honeybees are infected, they undergo fairly quickly a change in their nervous system," explains Tautz, "and change in nervous system means change in behavior, and change in behavior in this case means there are problems in orientation and navigation."

In short, the sick bee gets lost. Unable to find its way home, it conveniently dies away from the colony. "This is a very, very clever measure of nature to clean the colony of such carriers of pathogens," Tautz adds. Unfortunately, the strategy may not work in commercial beekeeping operations where hundreds of colonies are crowded together, and the sick bee may wander into a neighboring hive.

The BEEgroup's spying on bees goes beyond tracking their comings and goings with radio chips. Using heat-sensitive cameras to observe bees in their colonies, the scientists have developed a clearer picture of the remarkable extent to which honeybees precisely control their environment. This is especially true for the brood nest, that part of the comb where pupae in capped cells grow to adulthood.

For pupae to develop properly, the brood nest must be kept at a constant temperature between 35 and 36 degrees C. Tautz and his colleagues have found that bees developing at slightly cooler temperatures may perform poorly at critical adult tasks. The job of controlling brood nest temperature falls to so-called heater bees, which vibrate their flight muscles to generate warmth. Thermographic images made by the BEEgroup show how these hot honeybees position themselves atop capped pupal cells for up to 30 minutes at a time, transferring their warmth to the developing bee inside. Heater bees also crawl into empty cells scattered among those containing pupae--normally about 5 to 10 percent of the cells are empty--yet another way adults are able to transfer warmth to developing bees. 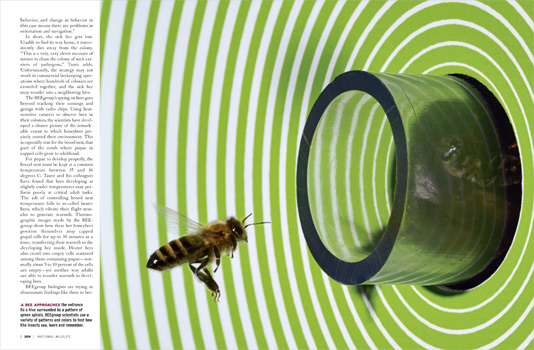 BEEgroup biologists are trying to disseminate findings like these to beekeepers. As Tautz explains it, some beekeepers strive to breed colonies in which queens (the colony's largest bee and the one that lays all its eggs) produce brood nests where every cell is sealed. "Animal breeders always want to have animals to be perfect," he says, which in the case of honeybees can mean selecting only those queens that produce "a beautiful brood nest." But a "perfect" brood nest with no empty cells is one where heater bees can't do their job. An "imperfect brood nest is perfect for the bees," says Tautz.

The wily ways of honeybees are the subject of a new book by Tautz, The Buzz about Bees: Biology of a Superorganism. By superorganism, the scientist means the bee colony itself, in which tens of thousands of insects function collectively as "an integrated and independent being . . . with its own, almost eerie, emergent group intelligence."

In his lectures, Tautz reminds students that an average bee colony contains about half as many nerve cells as a human brain. But while the neurons in our brain stay safely inside our skull, the bees that compose the colony come and go on honeybee errands. "It's like the neurons of your head would leave your head in the morning and be back in the evening." 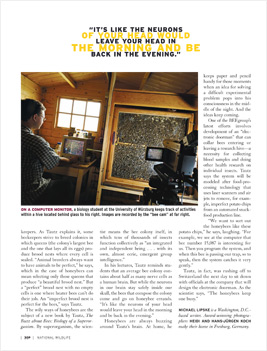 Honeybees are always buzzing around Tautz's brain. At home, he keeps paper and pencil handy for those moments when an idea for solving a difficult experimental problem pops into his consciousness in the middle of the night. And the ideas keep coming.

One of the BEEgroup's latest efforts involves development of an "electronic doorman" that can collar bees entering or leaving a research hive--a necessity for collecting blood samples and doing other health research on individual insects. Tautz says the system will be modeled after food-processing technology that uses laser scanners and air jets to remove, for example, imperfect potato chips from an automated snack-food production line.

"We want to sort out the honeybees like these potato chips," he says, laughing. "For example, we see at the computer that bee number 15,087 is interesting for us. Then you program the system, and when this bee is passing our trap, so to speak, then the system catches it very gently."

Tautz, in fact, was rushing off to Switzerland the next day to sit down with officials at the company that will design the electronic doorman. As the scientist says, "The honeybees keep one busy."