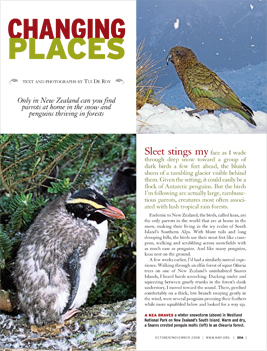 SLEET STINGS MY FACE as I wade through deep snow toward a group of dark birds a few feet ahead, the bluish sheen of a tumbling glacier visible behind them. Given the setting, it could easily be a flock of Antarctic penguins. But the birds I’m following are actually large, rambunctious parrots, creatures most often associated with lush tropical rain forests. Endemic to New Zealand, the birds, called keas, are the only parrots in the world that are at home in the snow, making their living in the icy realm of South Island’s Southern Alps. With blunt tails and long drooping bills, the birds use their stout feet like crampons, walking and scrabbling across snowfields with as much ease as penguins. And like many penguins, keas nest on the ground.

A few weeks earlier, I’d had a similarly surreal experience. Walking through an elfin forest of squat Olearia trees on one of New Zealand’s uninhabited Snares Islands, I heard harsh screeching. Ducking under and squeezing between gnarly trunks in the forest’s dank understory, I moved toward the sound. There, perched comfortably on a thick, low branch swaying gently in the wind, were several penguins preening their feathers while more squabbled below and looked for a way up.

The birds, Snares crested penguins, are found only on these densely forested islands, which lie just south of the New Zealand mainland. Piles of freshly dropped feathers on the muddy ground were signs that the birds had come to the forest to molt, a time when they must stay out of the water for two or three weeks undisturbed. 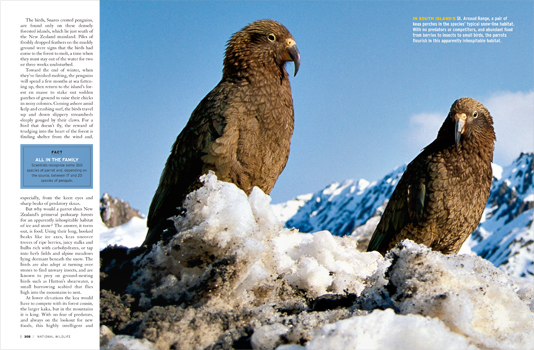 Toward the end of winter, when they’ve finished molting, the penguins will spend a few months at sea fattening up, then return to the island’s forest en masse to stake out sodden patches of ground to raise their chicks in noisy colonies. Coming ashore amid kelp and crashing surf, the birds travel up and down slippery streambeds deeply gouged by their claws. For a bird that doesn’t fly, the reward of trudging into the heart of the forest is finding shelter from the wind and, especially, from the keen eyes and sharp beaks of predatory skuas.

But why would a parrot shun New Zealand’s primeval podocarp forests for an apparently inhospitable habitat of ice and snow? The answer, it turns out, is food. Using their long, hooked beaks like ice axes, keas uncover troves of ripe berries, juicy stalks and bulbs rich with carbohydrates, or tap into herb fields and alpine meadows lying dormant beneath the snow. The birds are also adept at turning over stones to find unwary insects, and are known to prey on ground-nesting birds such as Hutton’s shearwater, a small burrowing seabird that flies high into the mountains to nest.

At lower elevations the kea would have to compete with its forest cousin, the larger kaka, but in the mountains it is king. With no fear of predators, and always on the lookout for new foods, this highly intelligent and inquisitive parrot is known for investigating with its bill manmade objects such as boots, tents and bicycle seats—much to the chagrin of many hikers, campers and bikers. During hard winters some keas have even learned to attack and kill sheep left to range in the high country, feeding on the mammals’ fat. 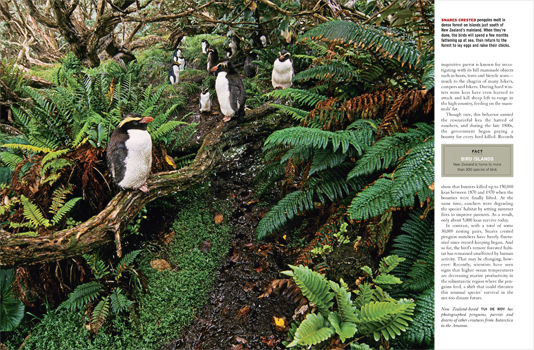 Though rare, this behavior earned the resourceful kea the hatred of ranchers, and during the late 1800s, the government began paying a bounty for every bird killed. Records show that hunters killed up to 150,000 keas between 1870 and 1970 when the bounties were finally lifted. At the same time, ranchers were degrading the species’ habitat by setting summer fires to improve pastures. As a result, only about 5,000 keas survive today.

In contrast, with a total of some 30,000 nesting pairs, Snares crested penguin numbers have barely fluctuated since record-keeping began. And so far, the bird’s remote forested habitat has remained unaffected by human activity. That may be changing, however: Recently, scientists have seen signs that higher ocean temperatures are decreasing marine productivity in the subantarctic region where the penguins feed, a shift that could threaten this unusual species’ survival in the not too distant future.

New Zealand-based Tui De Roy has photographed penguins, parrots and dozens of other creatures from Antarctica to the Amazon.