Hidden Treasures of the Wild West 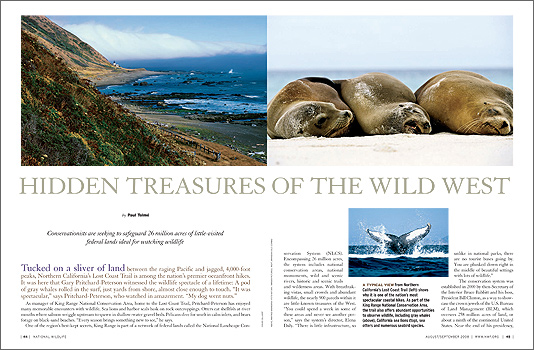 TUCKED ON A SLIVER of land between the raging Pacific and jagged, 4,000-foot peaks, Northern California’s Lost Coast Trail is among the nation’s premier oceanfront hikes. It was here that Gary Pritchard-Peterson witnessed the wildlife spectacle of a lifetime: A pod of gray whales rolled in the surf, just yards from shore, almost close enough to touch. “It was spectacular,” says Pritchard-Peterson, who watched in amazement. “My dog went nuts.”

As manager of King Range National Conservation Area, home to the Lost Coast Trail, Pritchard-Peterson has enjoyed many memorable encounters with wildlife. Sea lions and harbor seals bask on rock outcroppings. Otters eat shellfish at river mouths where salmon wriggle upstream to spawn in shallow-water gravel beds. Pelicans dive for smelt in calm inlets, and bears forage on black-sand beaches. “Every season brings something new to see,” he says.

One of the region’s best-kept secrets, King Range is part of a network of federal lands called the National Landscape Conservation System (NLCS). Encompassing 26 million acres, the system includes national conservation areas, national monuments, wild and scenic rivers, historic and scenic trails and wilderness areas. With breathtaking vistas, small crowds and abundant wildlife, the nearly 900 parcels within it are little-known treasures of the West. “You could spend a week in some of these areas and never see another person,” says the system’s director, Elena Daly. “There is little infrastructure, so unlike in national parks, there are no tourist buses going by. You are plunked down right in the middle of beautiful settings with lots of wildlife.” 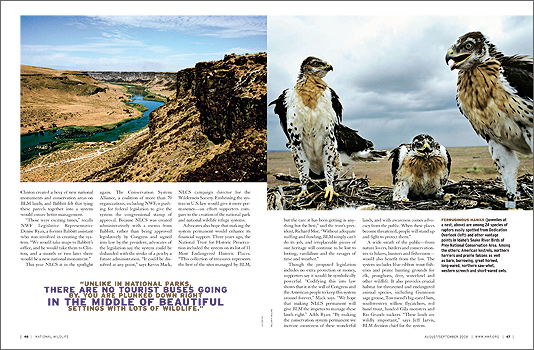 The conservation system was established in 2000 by then-Secretary of the Interior Bruce Babbitt and his boss, President Bill Clinton, as a way to showcase the crown jewels of the U.S. Bureau of Land Management (BLM), which oversees 258 million acres of land, or about a ninth of the continental United States. Near the end of his presidency, Clinton created a bevy of new national monuments and conservation areas on BLM lands, and Babbitt felt that tying these parcels together into a system would ensure better management.

“Those were exciting times,” recalls NWF Legislative Representative Denise Ryan, a former Babbitt assistant who was involved in creating the system. “We would take maps to Babbitt’s office, and he would take them to Clinton, and a month or two later there would be a new national monument.”

This year NLCS is in the spotlight again. The Conservation System Alliance, a coalition of more than 70 organizations, including NWF, is pushing for federal legislation to give the system the congressional stamp of approval. Because NLCS was created administratively with a memo from Babbitt, rather than being approved legislatively by Congress and signed into law by the president, advocates of the legislation say the system could be disbanded with the stroke of a pen by a future administration. “It could be dissolved at any point,” says Kevin Mack, NLCS campaign director for the Wilderness Society. Enshrining the system in U.S. law would give it more permanency—an effort supporters compare to the creation of the national park and national wildlife refuge systems.

Advocates also hope that making the system permanent would enhance its financial support. Three years ago, the National Trust for Historic Preservation included the system on its list of 11 Most Endangered Historic Places. “This collection of treasures represents the best of the sites managed by BLM, but the care it has been getting is anything but the best,” said the trust’s president, Richard Moe. “Without adequate staffing and funding, BLM simply can’t do its job, and irreplaceable pieces of our heritage will continue to be lost to looting, vandalism and the ravages of time and weather.”

Though the proposed legislation includes no extra protection or money, supporters say it would be symbolically powerful. “Codifying this into law shows that it is the will of Congress and the American people to keep this system around forever,” Mack says. “We hope that making NLCS permanent will give BLM the impetus to manage these lands right.” Adds Ryan: “By making the conservation system permanent we increase awareness of these wonderful lands, and with awareness comes advocacy from the public. When these places become threatened, people will stand up and fight to protect them.”

A trip through the conservation system offers opportunities to hike, paddle, climb and backpack amidst dramatic landscapes, surrounded by creatures large and small. Here is just a handful of the best places to view some of this magnificent wildlife: 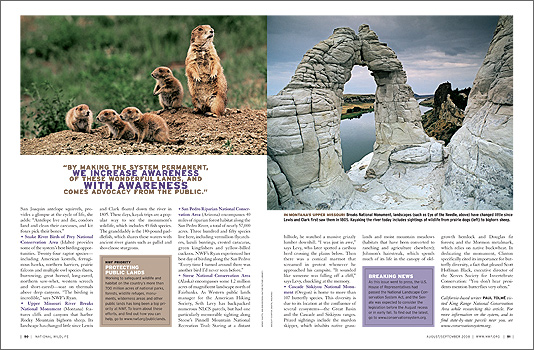 King Range National Conservation Area (California), established in 1970, was the first BLM parcel set aside for conservation and recreation. Today it is one of the largest chunks of undeveloped coastline in the continental United States, providing old-growth forest habitat for endangered spotted owls along with nesting grounds for endangered California least terns and snowy plovers. It also offers visitors prime viewing of seabirds at the California Coastal National Monument just off shore. More than 1,000 miles long and 12 miles wide, the monument and its 20,000 rock formations comprise one of the nation’s most vital seabird rookeries.
Vermillion Cliffs National Monument (Arizona) lies on spectacular, undulating red sandstone along the Utah-Arizona border. Here, biologists are reintroducing North America’s largest bird, the California condor. Each March, spectators gather to witness captive-bred birds being released to join the area’s population of 60 condors, whose nearly 10-foot wingspans create a loud rush of wind. “It makes the hair stand up on the back of your neck when you see one up close,” says monument manager Linda Price.
Grand Canyon-Parashant National Monument (Arizona) comprises more than one million acres of high-desert landscape straddling the Colorado River. Wild turkeys scamper across these lands, which are also home to mule deer and a Southwestern icon, the desert bighorn sheep. Bighorns are a wildlife watcher’s dream because, unlike species best viewed at dawn or dusk, they are visible during “banker’s hours” and will stand and stare back if perched safely on high ground.
Carrizo Plain National Monument (California) contains the Central Valley’s largest remnant grassland, where pronghorn and endangered giant kangaroo rats nibble grasses. These nocturnal jumping rodents are best seen by flashlight at night, when they stuff their cheeks with seeds and grasses to stash in underground caches. “They’re like little lawn mowers,” says BLM biologist Kathy Sharum, who studies kangaroo rats and their endangered predator, the San Joaquin kit fox. The 250,000-acre grassland, also home to rare blunt-nosed leopard lizards and San Joaquin antelope squirrels, provides a glimpse at the cycle of life, she adds: “Antelope live and die, condors land and clean their carcasses, and kit foxes pick their bones.”
Snake River Birds of Prey National Conservation Area (Idaho) provides some of the system’s best birding opportunities. Twenty-four raptor species—including American kestrels, ferruginous hawks, northern harriers, prairie falcons and multiple owl species (barn, burrowing, great horned, long-eared, northern saw-whet, western screech and short-eared)—soar on thermals above deep canyons. “The birding is incredible,” says NWF’s Ryan. 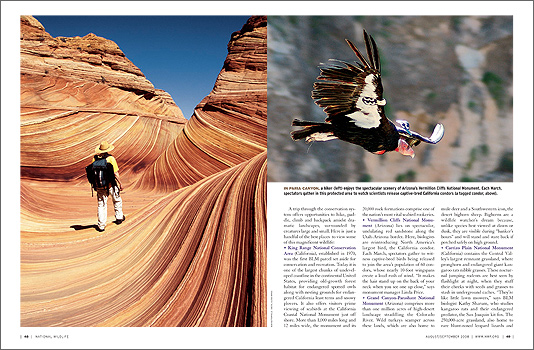 Upper Missouri River Breaks National Monument (Montana) features cliffs and canyons that harbor Rocky Mountain bighorn sheep. Its landscape has changed little since Lewis and Clark floated down the river in 1805. These days, kayak trips are a popular way to see the monument’s wildlife, which includes 49 fish species. The granddaddy is the 140-pound paddlefish, which shares these waters with ancient river giants such as pallid and shovelnose sturgeons.
San Pedro Riparian National Conservation Area (Arizona) encompasses 40 miles of riparian forest habitat along the San Pedro River, a total of nearly 57,000 acres. Three hundred and fifty species live here, including vermillion flycatchers, lazuli buntings, crested caracaras, green kingfishers and yellow-billed cuckoos. NWF’s Ryan experienced her best day of birding along the San Pedro: “Every time I turned around there was another bird I’d never seen before.”
Steese National Conservation Area (Alaska) encompasses some 1.2 million acres of magnificent landscape north of Fairbanks. As Western public lands manager for the American Hiking Society, Seth Levy has backpacked numerous NLCS parcels, but had one particularly memorable sighting along Steese’s Pinnell Mountain National Recreation Trail: Staring at a distant hillside, he watched a massive grizzly lumber downhill. “I was just in awe,” says Levy, who later spotted a caribou herd crossing the plains below. Then there was a comical marmot that screamed in protest whenever he approached his campsite. “It sounded like someone was falling off a cliff,” says Levy, chuckling at the memory.
Cascade Siskiyou National Monument (Oregon) is home to more than 107 butterfly species. This diversity is due to its location at the confluence of several ecosystems—the Great Basin and the Cascade and Siskiyou ranges. Prized sightings include the mardon skipper, which inhabits native grasslands and moist mountain meadows (habitats that have been converted to ranching and agriculture elsewhere); Johnson’s hairstreak, which spends much of its life in the canopy of old-growth hemlock and Douglas fir forests; and the Mormon metalmark, which relies on native buckwheat. In dedicating the monument, Clinton specifically cited its importance for butterfly diversity, a fact that pleased Scott Hoffman Black, executive director of the Xerces Society for Invertebrate Conservation: “You don’t hear presidents mention butterflies very often.”
California-based writer Paul Tolmé visited King Range National Conservation Area while researching this article. For more information on the system, and to find state-by-state parcels near you, see www.conservationsystem.org.

As this issue went to press, the U.S. House of Representatives had passed the National Landscape Conservation System Act, and the Senate was expected to consider the legislation before the August recess or in early fall. To find out the latest, go to www.conservationsystem.org.

Working to safeguard wildlife and habitat on the country’s more than 700 million acres of national parks, forests, wildlife refuges, monuments, wilderness areas and other public lands has long been a top priority at NWF. To learn about these efforts, and find out how you can help, go to www.nwf.org/publiclands.

As this issue of National Wildlife went to press, the U.S. Senate was not expected to vote on the National Landscape Conservation System Act until late summer or early fall. (The House of Representatives passed its version of this legislation in spring.) Meanwhile, two other bills—passed by both houses of Congress and signed by the President in May—expanded the number of units included within the conservation system. Both units, classified as Outstanding Natural Areas, are lighthouses surrounded by wildlife habitat. The first is outside San Luis Obispo, California, and the other in Jupiter, Florida. According to NWF Legislative Representative Denise Ryan, who helped campaign for the bills, the California area includes nesting and resting habitat for marine mammals and sea birds while the Florida parcel features endangered gopher tortoises, manatees and plants. “These areas may not be typical for the conservation system—which tends to showcase larger, more spectacular landscapes—but they will protect historic sites, cultural resources and important regional habitat as well as provide great opportunities for research, outreach to the public and environmental education,” says Ryan.—Laura Tangley