Give Your House an Efficiency Checkup 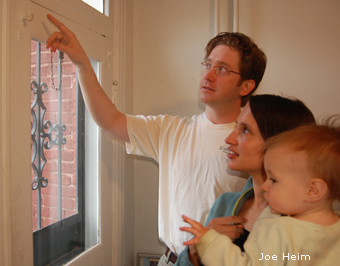 WHEN MY HUSBAND and I bought our first home—a century-old brick row house in Washington, D.C.’s Capitol Hill neighborhood—it had what real estate agents politely call “potential.” Its style was frozen in the 1960s, the decade of its last renovation. This meant the house had pink floral wallpaper, ancient brown wall-to-wall carpeting (over even more ancient linoleum) and a big porcelain sink in the kitchen. And, as we discovered during our first winter in the house, it also had leaky windows, an attic with no insulation and a back door so drafty that on cold mornings the floor next to it felt like ice.


The wallpaper and carpet were easy enough to fix. But after spending that winter wrapped in bulky coats and doubled-up socks, and paying sky-high heating bills, we decided we needed a pro to help us figure out how best to save energy and money. So we scheduled a home energy audit.

Energy auditors are trained technicians who use hi-tech, specialized equipment to snoop out which parts of a house are the biggest energy wasters. I confess I awaited our audit appointment with dread. It was like anticipating a physical exam knowing I could stand to lose a couple—or a couple dozen—pounds; I knew we would hear that we needed to make some changes, and that some of them would probably be painful. We already try to reduce our family’s carbon footprint by recycling, using public transportation or driving a fuel-efficient car and being conscientious consumers. But as anyone shivering in our frigid kitchen could tell you, our new house was clearly not energy efficient.

Not that we are alone. Fully one-fifth of the United States’ energy consumption happens in the home, and more than half of that is used for heating and cooling. With ever-rising energy prices, homeowners are starting to see that improving their houses’ energy efficiency makes financial—not to mention environmental—sense.

A home energy audit is a good place to start. On average, an audit costs around $250. Happily for us, Washington is one of a growing number of U.S. cities that provide free energy audits to homeowners through a program funded by a small surcharge on residents’ utility bills. George Hawkins, director of the D.C. Department of the Environment, says that government funding of the program makes sense for several reasons. “First, the reduced energy usage means better air quality within D.C. Second, it helps the District do its part to reduce global warming,” he says. “And it helps people save money. For some people, paying less for energy means having more money for food and other things they need.”

How an audit works

Our energy auditor, Jim Conlon of Elysian Energy (above, with the author and her son), is a former real estate agent who switched careers a couple of years ago (smack in the middle of the housing boom) when he realized that he could fill a growing niche by helping homeowners improve their houses’ efficiency. After a quick walk-through of the house, Conlon installed the equipment that is at the heart of any effective energy audit: a blower door. The powerful fan, which is sealed into an exterior doorframe with plastic sheeting, pulls air out of the house, lowering the interior air pressure. This causes outside air to rush through all unsealed cracks in the house and allows the auditor to determine the rate at which outside air infiltrates the building.

Conlon installed his equipment at the back of our house, explaining he chose that door because it was so obviously drafty there was no need to test it. Gulp. Indeed, my husband and I had blocked the drafts with a rolled-up rug ever since we moved in—a temporary solution that got Conlon’s seal of approval. “That’s actually fine,” he says. “Whatever works.”

During his 90-minute examination of our house, Conlon pointed out the obvious gaps—“wherever you see daylight”—as well as ones I would have never found on my own. Surprise: The skylight was “super leaky,” says Conlon. And our basement door, which we leave open all the time to allow our cat access to her litter box, was a huge energy waster. An easy fix: install a cat door.

A couple of weeks later, we received a copy of our “Home Energy Report Card,” a detailed, plain English explanation of our house’s energy weaknesses. As it turned out, the worst culprits were our leaky doors, windows and skylight. Conlon estimated that we would save $171 per year by sealing those gaps. And the initial expense would be minimal, he says. “You could go down to the hardware store and spend $20 or $30 on weather stripping,” he said. “You’ll save that much in a month.” In the longer term, Conlon recommended replacing the original, crumbling windows and door at the back of our house. The report also graded our insulation (middling), water heater (due for replacement) and appliances (not too bad). Altogether, it estimated we could save up to $400 a year in energy costs if we made the recommended improvements.

Hannah Schardt is a senior associate editor at this magazine. For instructions on how to conduct a do-it-yourself home energy audit, visit our blog.