Monkeys on the Mend 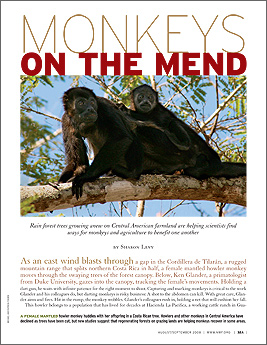 AS AN EAST WIND blasts through a gap in the Cordillera de Tilarán, a rugged mountain range that splits northern Costa Rica in half, a female mantled howler monkey moves through the swaying trees of the forest canopy. Below, Ken Glander, a primatologist from Duke University, gazes into the canopy, tracking the female’s movements. Holding a dart gun, he waits with infinite patience for the right moment to shoot. Capturing and marking monkeys is critical to the work Glander and his colleagues do, but darting monkeys is risky business: A shot to the abdomen can kill. With great care, Glander aims and fires. Hit in the rump, the monkey wobbles. Glander’s colleagues rush in, holding a net that will cushion her fall.

This howler belongs to a population that has lived for decades at Hacienda La Pacifica, a working cattle ranch in Guanacaste province. Other native primates—white-faced capuchin monkeys and spider monkeys—once were common in this area, too, but vanished after the Pan-American Highway was built nearby in the 1950s. Most of the surrounding land was clear-cut for pasture. At Hacienda La Pacifica, an enlightened ranch owner chose to let strips of native trees grow as windbreaks, to protect both cattle and their forage from dry-season winds. In the process, he created a unique laboratory for the study of monkeys. He and researchers such as Glander also are finding that monkeys and farmers can benefit one another in ways that make farming a tool of wildlife conservation.

Glander, who has studied monkeys for more than 37 years in Belize, Ecuador and Venezuela, is seeking at La Pacifica to understand the relationship between howlers and regenerating forests at the edges of grazing lands. Studying such disturbed woodlands is increasingly important, because throughout much of the New World Tropics, these are the only forests left. Tropical dry forests once covered most of Central America, but by the 1980s less than 2 percent remained undisturbed and less than 1 percent was protected. 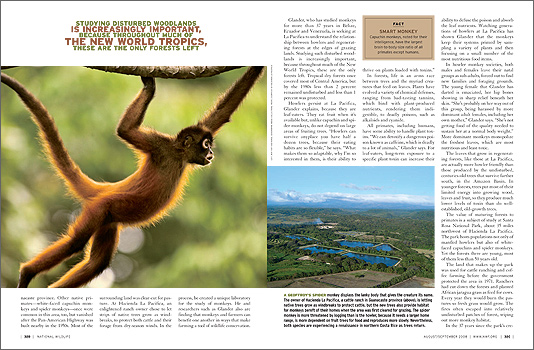 Howlers persist at La Pacifica, Glander explains, because they are leaf-eaters. They eat fruit when it’s available but, unlike capuchin and spider monkeys, do not depend on large areas of fruiting trees. “Howlers can survive anyplace you have half a dozen trees, because their eating habits are so flexible,” he says. “What makes them so adaptable, why I’m so interested in them, is their ability to thrive on plants loaded with toxins.”

In forests, life is an arms race between trees and the myriad creatures that feed on leaves. Plants have evolved a variety of chemical defenses, ranging from bad-tasting tannins, which bind with plant-produced nutrients, rendering them indigestible, to deadly poisons, such as alkaloids and cyanide.

All primates, including humans, have some ability to handle plant toxins. “We can detoxify a dangerous poison known as caffeine, which is deadly to a lot of animals,” Glander says. For leaf-eaters, long-term exposure to a specific plant toxin can increase their ability to defuse the poison and absorb the leaf nutrients. Watching generations of howlers at La Pacifica has shown Glander that the monkeys keep their systems primed by sampling a variety of plants and then focusing on a small number of the most nutritious food items.

In howler monkey societies, both males and females leave their natal groups as subadults, forced out to find new families and foraging grounds. The young female that Glander has darted is emaciated, her hip bones showing in sharp relief beneath her skin. “She’s probably on her way out of this group, being harassed by more dominant adult females, including her own mother,” Glander says. “She’s not getting food of the quality needed to sustain her at a normal body weight.” More dominant monkeys monopolize the freshest leaves, which are most nutritious and least toxic. The leaves that grow in regenerating forests, like those at La Pacifica, are actually more howler friendly than those produced by the undisturbed, centuries-old trees that survive farther south, in the Amazon Basin. In younger forests, trees put most of their limited energy into growing wood, leaves and fruit, so they produce much lower levels of toxin than do well-established, old-growth trees. 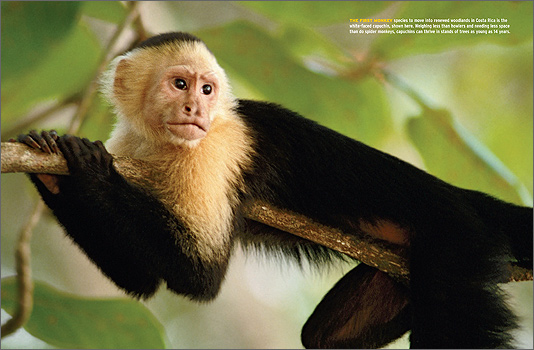 The value of maturing forests to primates is a subject of study at Santa Rosa National Park, about 35 miles northwest of Hacienda La Pacifica. The park hosts populations not only of mantled howlers but also of white-faced capuchins and spider monkeys. Yet the forests there are young, most of them less than 50 years old.

The land that makes up the park was used for cattle ranching and coffee farming before the government protected the area in 1971. Ranchers had cut down the forests and planted African jaragua grass as feed for cows. Every year they would burn the pastures so fresh grass would grow. The fires often escaped into relatively undisturbed patches of forest, wiping out more monkey habitat.

In the 37 years since the park’s creation, trees have invaded abandoned pastures, and surviving stands of forest have filled out, with new seedlings thriving in burned areas. Linda Fedigan, a primatologist at the University of Calgary, has been tracking Santa Rosa’s monkeys since 1982. She’s documented an impressive renaissance of all three species native to northern Costa Rica: mantled howlers, capuchins and spider monkeys. Her study is among the first to track how monkeys use regenerating forest.

Capuchins were the first to begin using the reborn forests, when the trees were as young as 14 years. Howlers, larger and heavier than capuchins, need somewhat older trees, with limbs that can support their greater body weight. They showed up when forests reached 30 to 60 years old. Eventually even spider monkeys, fruit-eaters that need large areas of continuous forest, returned. Howlers have outpaced the spread of the early-arriving capuchins. In the first 28 years following protection of the area, the capuchin population doubled, while the number of howlers increased sevenfold. Some of the same traits that allow howlers to survive on the edges of a working ranch at Hacienda La Pacifica also explain their population boom in Santa Rosa. “Howlers are more resilient than capuchins and spider monkeys for several reasons,” Fedigan explains. “They can live within a small home range, as long as the trees have the right food for them. Spider monkeys, on the other hand, occupy a huge home range, so they can’t make it in fragmented habitat.”

Howlers also reproduce faster than do other monkey species in the area. Capuchins don’t bear their first young until about 7 years old, and spider monkeys do so even later, but howlers give birth for the first time at about 3.5 years of age. Also, while a female spider monkey will have a baby about once every four years, well-fed howlers can produce an infant every two years. 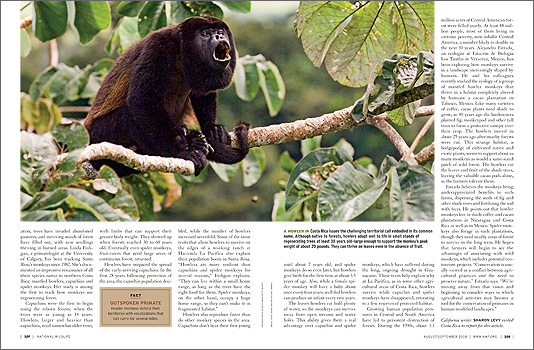 The leaves howlers eat hold plenty of water, so the monkeys can survive away from open streams and water holes. This ability gives them a real advantage over capuchin and spider monkeys, which have suffered during the long, ongoing drought in Guanacaste. These traits help explain why at La Pacifica, as in some other agricultural areas of Costa Rica, howlers survive while capuchin and spider monkeys have disappeared, retreating to a few reserves of protected habitat.

Growing human population pressures in Central and South America have led to persistent destruction of forests. During the 1990s, about 1.1 million acres of Central American forest were felled yearly. At least 48 million people, most of them living in extreme poverty, now inhabit Central America, a number likely to double in the next 30 years. Alejandro Estrada, an ecologist at Estación de Biologia Los Tuxtlas in Veracruz, Mexico, has been exploring how monkeys survive in a landscape increasingly shaped by humans. He and his colleagues recently studied the ecology of a group of mantled howler monkeys that thrive in a habitat completely altered by humans: a cacao plantation in Tabasco, Mexico. Like many varieties of coffee, cacao plants need shade to grow, so 40 years ago the landowners planted fig, monkeypod and other tall trees to form a protective canopy over their crop. The howlers moved in about 25 years ago after nearby forests were cut. This strange habitat, a hodgepodge of cultivated native and exotic plants, seems to support about as many monkeys as would a same-sized patch of wild forest. The howlers eat the leaves and fruit of the shade trees, leaving the valuable cacao pods alone, so the farmers tolerate them.

Estrada believes the monkeys bring underappreciated benefits to such farms, dispersing the seeds of fig and other shade trees and fertilizing the soil with feces. He points out that howler monkeys live in shade coffee and cacao plantations in Nicaragua and Costa Rica as well as in Mexico. Spider monkeys also forage in such plantations, though they need nearby areas of forest to survive in the long term. He hopes that farmers will begin to see the advantages of associating with wild monkeys, which includes potential ecotourism projects. “Conservation is usually viewed as a conflict between agricultural practices and the need to preserve nature,” Estrada says. “We’re moving away from that vision and beginning to consider ways in which agricultural activities may become a tool for the conservation of primates in human-modified landscapes.”