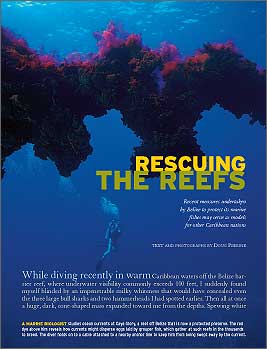 WHILE DIVING RECENTLY in warm Caribbean waters off the Belize barrier reef, where underwater visibility commonly exceeds 100 feet, I suddenly found myself blinded by an impenetrable milky whiteness that would have concealed even the three large bull sharks and two hammerheads I had spotted earlier. Then all at once a huge, dark, cone-shaped mass expanded toward me from the depths. Spewing white "smoke" from its apex, it missed me by only a few feet. It was what my diving companion, biologist Will Heyman of Texas A&M University, calls a "volcano," though it was no geological formation. It was composed of 3,000 to 5,000 cubera snappers, a species of fish that can grow more than 5 feet long and weigh up to 125 pounds. The white cloud was a billowing mass of eggs and semen that marked the climax of the snappers' mass breeding ritual.


As I drifted in the cloud, a silhouette at least three times my body length cruised above me through the haze--a whale shark, feeding on the eggs. I was witnessing a phenomenon Heyman has been studying for more than 10 years. Until Heyman did his research in Belize, scientists had not even known that whale sharks fed on fish eggs. That discovery helped initiate major changes in the conservation of the marine resources that make Belize unique, changes now serving as a model for other ocean habitats facing threats from overuse.

The Nature Conservancy sent Heyman to Belize in 1994 to create among fishermen and other resource stakeholders in southern Belize a consensus for the creation of a marine protected area that would ensure preservation and sustainable use of local marine resources. Heyman's hired guide, a former commercial fisherman named Eloy Cuevas, told him that since the 1940s local fishermen had exploited spawning mutton snappers that gathered each April and May in vast numbers off the town of Placencia at a reef called Gladden Spit. Heyman and others documented that the reef attracts 21 species of spawning fish, including four snapper, five grouper and six jack species. Using satellite imagery and field observations he and his colleagues found 13 similar promontories adjacent to deep water in the Belize barrier reef complex. All hosted multispecies spawning aggregations (SPAGs). "The SPAGs were really not part of what I was supposed to be working on at the time," Heyman says. "But when I came across them I realized that I had a chance to grab a comet by the tail. So I did, and I wouldn't let go of it. I lost my job because of that. My boss told me that it wasn't part of my job. Fortunately, another part of The Nature Conservancy hired me on and let me keep working on the SPAGs." 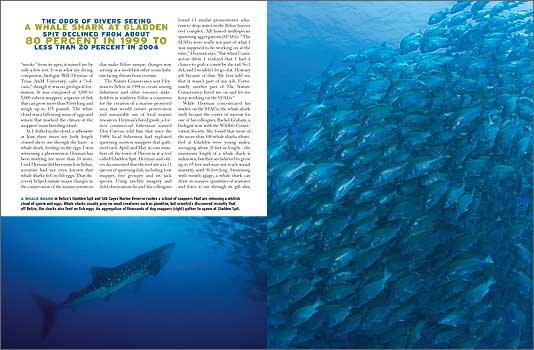 While Heyman concentrated his studies on the SPAGs, the whale shark itself became the center of interest for one of his colleagues, Rachel Graham, a biologist now with the Wildlife Conservation Society. She found that most of the more than 100 whale sharks identified at Gladden were young males, averaging about 20 feet in length--the maximum length of a whale shark is unknown, but they are believed to grow up to 65 feet and may not reach sexual maturity until 30 feet long. Swimming with mouth agape, a whale shark can draw in massive quantities of seawater and force it out through its gill slits, trapping millions of fish eggs and tiny planktonic creatures on a fine filter screen formed of modified gill rakers. Only the cubera snappers and, occasionally, dog snappers release spawn clouds dense enough to attract whale sharks. 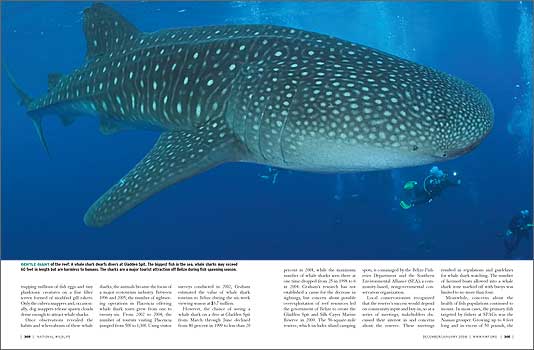 Once observations revealed the habits and whereabouts of these whale sharks, the animals became the focus of a major ecotourism industry. Between 1996 and 2005, the number of sightseeing operations in Placencia offering whale shark tours grew from one to twenty-six. From 2002 to 2004, the number of tourists visiting Placencia jumped from 500 to 1,300. Using visitor surveys conducted in 2002, Graham estimated the value of whale shark tourism to Belize during the six-week viewing season at $3.7 million.

However, the chance of seeing a whale shark on a dive at Gladden Spit from March through June declined from 80 percent in 1999 to less than 20 percent in 2004, while the maximum number of whale sharks seen there at one time dropped from 25 in 1998 to 6 in 2004. Graham's research has not established a cause for the decrease in sightings, but concern about possible overexploitation of reef resources led the government of Belize to create the Gladden Spit and Silk Cayes Marine Reserve in 2000. The 56-square-mile reserve, which includes island camping spots, is comanaged by the Belize Fisheries Department and the Southern Environmental Alliance (SEA), a community-based, nongovernmental conservation organization.

Local conservationists recognized that the reserve's success would depend on community input and buy-in, so at a series of meetings, stakeholders discussed their interest in and concerns about the reserve. These meetings resulted in regulations and guidelines for whale shark watching. The number of licensed boats allowed into a whale shark zone marked off with buoys was limited to no more than four.

Meanwhile, concerns about the health of fish populations continued to mount. In most cases, the primary fish targeted by fishers at SPAGs was the Nassau grouper. Growing up to 4 feet long and in excess of 50 pounds, the Nassau grouper was formerly common on reefs throughout the region but has recently been listed as endangered on the Red List of the World Conservation Union and is a candidate for the U.S. Endangered Species List.

Nassau groupers reproduce in aggregations of up to 100,000. During the spawning season, the fish leave home reefs and travel, sometimes great distances (136 miles for one tagged fish), to an aggregating site, where they often are met by flotillas of fishermen. About a third of the known Nassau grouper SPAGs in the Caribbean region had been completely extirpated by the end of the 20th century. In Belize, this grouper was formerly the second most frequently landed fish. By 2001, only two of nine fishing sites there had more than 150 groupers present. A SPAG at Rocky Point discovered in the early 1980s produced 45,000 pounds of grouper filets the first year it was fished. A diving survey in 2002 found only three groupers at the site. 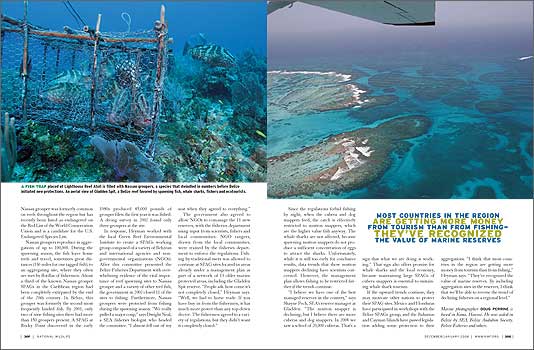 In response, Heyman worked with the local Green Reef Environmental Institute to create a SPAGs working group composed of a variety of Belizean and international agencies and nongovernmental organizations (NGOs). After this committee presented the Belize Fisheries Department with overwhelming evidence of the vital importance of reef spawning sites to Nassau grouper and a variety of other reef fish, the government in 2002 closed 11 of the sites to fishing. Furthermore, Nassau groupers were protected from fishing during the spawning season. "We really pulled a major coup," says Dwight Neal, a SEA fisheries biologist who headed the committee. "I almost fell out of my seat when they agreed to everything."

The government also agreed to allow NGOs to comanage the 11 new reserves, with the fisheries department using input from scientists, fishers and local communities. NGO rangers, drawn from the local communities, were trained by the fisheries department to enforce the regulations. Fishing by traditional users was allowed to continue at SPAG sites located in areas already under a management plan as part of a network of 13 older marine protected areas, including the Gladden Spit reserve. "People ask how come it's not completely closed," Heyman says. "Well, we had to horse trade. If you have buy-in from the fishermen, it has much more power than any top-down decree. The fishermen agreed to a variety of regulations, but they didn't want it completely closed."

Since the regulations forbid fishing by night, when the cubera and dog snappers feed, the catch is effectively restricted to mutton snappers, which are the higher value fish anyway. The whale sharks are not affected, because spawning mutton snappers do not produce a sufficient concentration of eggs to attract the sharks. Unfortunately, while it is still too early for conclusive results, data trends that show mutton snappers declining have scientists concerned. However, the management plan allows fishing to be restricted further if the trends continue.

"I believe we have one of the best managed reserves in the country," says Shayne Pech, SEA's reserve manager at Gladden. "The mutton snapper is declining, but I believe there are more cuberas and dog snappers. In 2004 we saw a school of 20,000 cuberas. That's a sign that what we are doing is working." That sign also offers promise for whale sharks and the local economy, because maintaining large SPAGs of cubera snappers is essential to sustaining whale shark tourism. If the upward trends continue, they may motivate other nations to protect their SPAG sites. Mexico and Honduras have participated in workshops with the Belize SPAGs group, and the Bahamas and Cayman Islands have passed legislation adding some protection to their aggregations. "I think that most countries in the region are getting more money from tourism than from fishing," Heyman says. "They've recognized the value of marine reserves. By including aggregation sites in the reserves, I think that we'll be able to reverse the trend of declining fisheries on a regional level."

Marine photographer Doug Perrine is based in Kona, Hawaii. He was aided in Belize by SEA, Belize Audubon Society, Belize Fisheries and others.