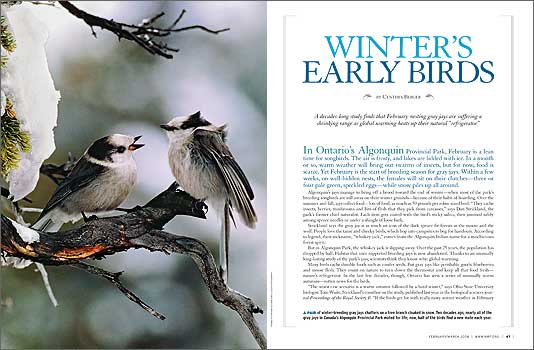 IN ONTARIO’S ALGONQUIN Provincial Park, February is a lean time for songbirds. The air is frosty, and lakes are lidded with ice. In a month or so, warm weather will bring out swarms of insects, but for now, food is scarce. Yet February is the start of breeding season for gray jays. Within a few weeks, on well-hidden nests, the females will sit on their clutches—three or four pale green, speckled eggs—while snow piles up all around.

Algonquin’s jays manage to bring off a brood toward the end of winter—when most of the park’s breeding songbirds are still away on their winter grounds—because of their habit of hoarding. Over the summer and fall, jays collect food—lots of food, as much as 50 pounds per robin-sized bird. “They cache insects, berries, mushrooms and bits of flesh that they pick from carcasses,” says Dan Strickland, the park’s former chief naturalist. Each item gets coated with the bird’s sticky saliva, then jammed safely among spruce needles or under a shingle of loose bark.

Strickland says the gray jay is as much an icon of the dark spruce-fir forests as the moose and the wolf. People love the tame and cheeky birds, which hop into campsites to beg for handouts. According to legend, their nickname, “whiskey jack,” comes from the Algonquin Indian name for a mischievous forest spirit. But in Algonquin Park, the whiskey jack is slipping away. Over the past 25 years, the population has dropped by half. Habitat that once supported breeding jays is now abandoned. Thanks to an unusually long-lasting study of the park’s jays, scientists think they know why: global warming.

Many birds cache durable foods such as conifer seeds. But gray jays like perishable goods: blueberries and moose flesh. They count on nature to turn down the thermostat and keep all that food fresh—nature’s refrigerator. In the last few decades, though, Ontario has seen a series of unusually warm autumns—rotten news for the birds.

“The worst case scenario is a warm autumn followed by a hard winter,” says Ohio State University biologist Tom Waite, Strickland’s coauthor on the study, published last year in the biological sciences journal Proceedings of the Royal Society B. “If the birds get hit with really nasty winter weather in February and March, that leads to delayed breeding, fewer nestlings, and a higher probability of reproductive failure.”

Stanford University biologist Terry Root, the author of landmark publications on how climate change affects bird populations, says the gray jay study stands out as one of the first to document a range contraction—rather than expansion— due to global warming. “Many studies have shown that with rapid warming, bird species show distributional changes,” says Root, “but the changes we’ve seen have been almost exclusively expansions on the poleward side of species’ ranges. Theory has suggested we should also see the edges of some species’ ranges nearest the equator contract.” Here, at last, in Algonquin is evidence in support of the theory.

Algonquin’s jays have been monitored continuously since the early 1960s, when park naturalist Russ Rutter started fitting the birds with colored leg bands (a scientific novelty at the time). The term “global warming” was not yet in the scientific lexicon, and his research goal was modest. “It seems almost shocking to us now, but people didn’t know whether the jays were territorial or nomadic,” says Strickland, then a grad student. Rutter’s study revealed that jays do, in fact, hold down territories.

Strickland inherited the study from Rutter and continued to monitor the birds as he went on to become chief park naturalist. By the early 1990s, Strickland had been patiently banding jays for more than two decades. He noticed some population declines and started to wonder whether climate change might be behind it. Waite remembers being skeptical. After studying the birds in Alaska, he had just moved south to work with the Algonquin jays. “Every population goes up or down at some point,” he recalls telling Strickland. But Strickland had been out in the woods tracking the birds on a daily basis from mid-February to early May, and he couldn’t stop thinking about the clues he’d been seeing. 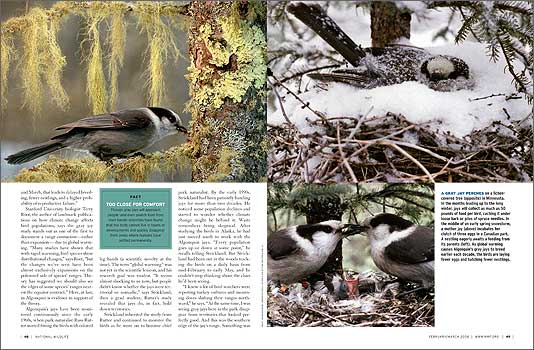 “I knew a lot of bird-watchers were reporting turkey vultures and mourning doves shifting their ranges northward,” he says. “At the same time, I was seeing gray jays here in the park disappear from territories that looked perfectly good. And this was the southern edge of the jay’s range. Something was stopping them from breeding farther to the south. What was it?”

That’s when Strickland made the leap. Maybe jays couldn’t breed farther south because the climate was too warm. If southern birds were moving north, the climate must be getting warmer here. He surmised that with warmer winter temperatures, the birds’ food stashes rot, leaving them poorly provisioned for the breeding season.

Testing this hypothesis was the challenge. One key clue was meteorological data: Waite and Strickland found that the annual air temperature at Algonquin was increasing, by about 0.7 degrees F per decade. Meanwhile, the jays were obviously disappearing: Newly vacant territories outnumbered reoccupied territories in 20 of 26 years. Breeding season was creeping earlier—on average, 3.1 days earlier per decade. At the same time, jays had worse and worse luck breeding, laying fewer eggs and hatching fewer nestlings.

So the birds were doing badly. Could the researchers lay the blame on rotting food? To make the connection, they checked whether birds did worse in years when autumns were especially warm, which would cause food stashes to rot. Indeed, on average the birds laid fewer eggs after warm autumns and more eggs after cold autumns. Finally, in territories where jays had access to extra food—at bird feeders—they generally did fine. 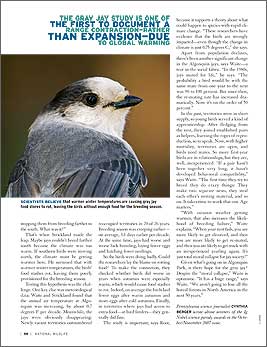 The study is important, says Root, because it supports a theory about what could happen to species with rapid climate change. “These researchers have evidence that the birds are strongly impacted—even though the change in climate is just 0.75 degrees C,” she says.

Apart from population declines, there’s been another significant change in the Algonquin jays, says Waite—a tear in the social fabric. “In the 1980s, jays mated for life,” he says. “The probability a bird would be with the same mate from one year to the next was 90 to 100 percent. But since then, the re-mating rate has increased dramatically. Now it’s on the order of 50 percent.”

In the past, territories were in short supply, so young birds served a kind of apprenticeship. After fledging from the nest, they joined established pairs as helpers, learning the ropes of reproduction, so to speak. Now, with higher mortality, territories are open, and birds need mates. So more first-year birds are in relationships, but they are, well, inexperienced. “If a pair hasn’t been together very long, it hasn’t developed behavioral compatibility,” says Waite. “The first time they try to breed they do crazy things: They make two separate nests, they steal each other’s nesting material, and so on. It takes time to work that out. Age matters.”

Given what’s going on in Algonquin Park, is there hope for the gray jay? Despite the “moral collapse,” Waite is optimistic. “It has a huge range,” says Waite. “We aren’t going to lose all the boreal forests in North America in the next 50 years.”