The High Price of Being a Hunk

In the world of dark-eyed juncos, the most hormonally charged males may be the most irresistible to females—and the least likely to live a long life 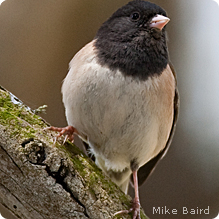 IF YOU PUT OUT birdseed this time of year, you’re probably familiar with the dark-eyed junco. According to the Cornell Lab of Ornithology, this widespread, sparrow-sized animal is the most common backyard feeder bird in much of North America. However, when it comes to its social and breeding behavior, the creature is anything but ordinary.

The dark-eyed junco includes five forms with color variations that once were considered separate species. Over the years, researchers have found that during winter flocks of the birds form rigid hierarchies led by dominant males and their seemingly closest adult male buddies. Younger males and females often are pushed to the periphery of the groups or forced to migrate farther south to avoid confrontations with these “good old boy” networks. Now, a new study reveals that another set of dynamics guides the birds when they pair up on their breeding grounds in early spring.

Even if a given group of male juncos all have the same coloration, a team of scientists led by Indiana University behavioral ecologist Ellen Ketterson and graduate student Joel McGlothlin discovered that there is a difference: Males with higher levels of testosterone—no matter what their age—are irresistible mates for older, more experienced females. Such males apparently have sweeter songs. “Females may also be choosing these males because they have larger patches of white feathers in their tails and flash their tails open more frequently,” says McGlothlin. The researchers found that these males tend to produce more offspring.

Securing one of the flashy, sweet-talking hunks might seem like an ideal choice for a discerning female, but the scientists discovered that these studs are not particularly good fathers and their offspring, though more numerous, are born smaller in size and die at higher rates. Although high levels of testosterone drive males to find and win mates, the hormonally charged birds are so eager to show off and chase after new partners that they don’t visit or bring food to their nests as often as their less popular rivals.

In an earlier study, Ketterson found that the über-juncos also pay a high price for their dominance: They tend to die at a younger age. Not only does elevated testosterone make them less wary of predators, it also increases their stress levels and promotes production of corticosterone, a hormone that mobilizes quick-release energy but also breaks down protein and leads to the atrophy of muscles, feathers and organs.

This classic evolutionary trade-off suggests that each strategy could be successful for different reasons. McGlothlin speculates that “high-quality males are more likely to benefit by reducing their parental care and searching for extra mates, whereas low-quality males would be wasting their time and should instead stay home and take care of the kids.”

Enticing Juncos to Your Yard
During winter, dark-eyed juncos are gregarious ground foragers that readily mingle with other birds in search of food. To attract them to your yard, place feed directly on the ground or in a platform or hopper feeder. The birds’ favored fare includes hulled sunflowers, millet and finely cracked corn. Because their bills are relatively small, the juncos are not able to handle larger seeds or sunflower seeds in the shell. To learn more about bird feeding, visit www.nwf.org/backyard.