In the Florida Keys, a family connects with nature while searching for a tiny butterfly in its sole remaining habitat 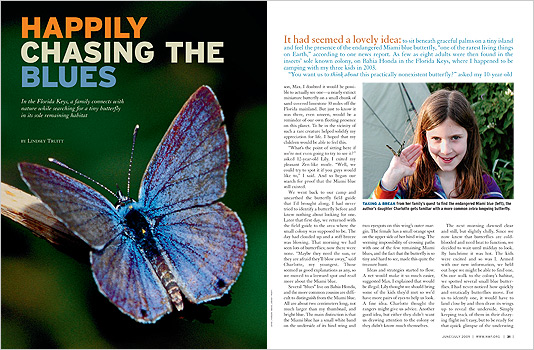 IT HAD SEEMED a lovely idea: to sit beneath graceful palms on a tiny island and feel the presence of the endangered Miami blue butterfly, “one of the rarest living things on Earth,” according to one news report. As few as eight adults were then found in the insects’ sole known colony, on Bahia Honda in the Florida Keys, where I happened to be camping with my three kids in 2003.

“You want us to think about this practically nonexistent butterfly?” asked my 10-year-old son, Max. I doubted it would be possible to actually see one—a nearly extinct miniature butterfly on a small chunk of sand-covered limestone 30 miles off the Florida mainland. But just to know it was there, even unseen, would be a reminder of our own fleeting presence on this planet. To be in the vicinity of such a rare creature helped solidify my appreciation for life. I hoped that my children would be able to feel this.

“What’s the point of sitting here if we’re not even going to try to see it?” asked 12-year-old Lily. I exited my pleasant Zen-like mode. “Well, we could try to spot it if you guys would like to,” I said. And so began our search for proof that the Miami blue still existed.

We went back to our camp and unearthed the butterfly field guide that I’d brought along. I had never tried to identify a butterfly before and knew nothing about looking for one. Later that first day, we returned with the field guide to the area where the small colony was supposed to be. The day had clouded up and a stiff breeze was blowing. That morning we had seen lots of butterflies; now there were none. “Maybe they need the sun, or they are afraid they’ll blow away,” said Charlotte, my youngest. Those seemed as good explanations as any, so we moved to a leeward spot and read more about the Miami blue.

Several “blues” live on Bahia Honda, and the more common cousins are difficult to distinguish from the Miami blue. All are about two centimeters long, not much larger than my thumbnail, and bright blue. The main distinction is that the Miami blue has a small white band on the underside of its hind wing and two eyespots on this wing’s outer margin. The female has a small orange spot on the upper side of her hind wing. The seeming impossibility of crossing paths with one of the few remaining Miami blues, and the fact that the butterfly is so tiny and hard to see, made this quite the treasure hunt.

Ideas and strategies started to flow. A net would make it so much easier, suggested Max. I explained that would be illegal. Lily thought we should bring some of the kids they’d met so we’d have more pairs of eyes to help us look. A fine idea. Charlotte thought the rangers might give us advice. Another good idea, but either they didn’t want us drawing attention to the colony or they didn’t know much themselves.

The next morning dawned clear and still, but slightly chilly. Since we now knew that butterflies are cold-blooded and need heat to function, we decided to wait until midday to look. By lunchtime it was hot. The kids were excited and so was I. Armed with our new information, we held out hope we might be able to find one. On our walk to the colony’s habitat, we spotted several small blue butterflies. I had never noticed how quickly and erratically butterflies move. For us to identify one, it would have to land close by and then draw its wings up to reveal the underside. Simply keeping track of them in their dizzying flight isn’t easy, but to be ready for that quick glimpse of the underwing requires a calmness that is somehow at odds with following their movement. Max was the first to have one light beside him. Proudly he stated, “No white band.” One by one, we each learned what wasn’t a Miami blue.

The host plant of the Miami blue is a thorny vine called nickerbean, a forbidding plant that seems like what you’d get if you crossed kudzu and a wild rose. It was impossible to wade into; we just stood at the edge watching distant butterflies flit and circle about. Sometimes a pair would get close and then land for a second; sometimes we could see an underwing. No Miami blues. 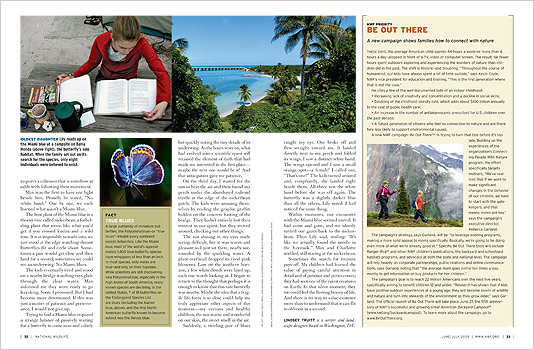 The kids eventually tired and stood on a nearby bridge watching rays glide through the clear water. Max informed me they were ready to go kayaking. Soon, I promised. But I had become more determined. If this was just a matter of patience and perseverance, I would not give up.

Trying to find a Miami blue required a strange balance of passively waiting for a butterfly to come near and calmly but quickly noting the tiny details of its underwing. As the hours wore on, what had evolved into a scientific quest still retained the element of faith that had made me interested in the first place—maybe the next one would be it! And that anticipation gave me patience. On the third day, I waited for the sun to heat the air and then found my perch under the abandoned railroad trestle at the edge of the nickerbean patch. The kids were amusing themselves by reading the graphic graffiti hidden on the concrete footing of the bridge. They hadn’t entirely lost their interest in our quest, but they moved around, checking out other things.

The sun shining in my eyes made seeing difficult, but it was warm and pleasant so I just sat there, nearly surrounded by the sparkling water. A plant overhead dropped its vivid pink blossoms. Low on the southern horizon, a few white clouds were lined up, each one worth looking at. I began to return to the thought that perhaps it is enough to know that this rare butterfly was nearby. Maybe the idea that a fragile life-form is so close could help me truly appreciate other aspects of this moment—my curious and healthy children, the sun warm and wonderful on our skin, the sweet smell in the air.

Suddenly, a twirling pair of blues caught my eye. One broke off and flew straight toward me. It landed directly next to my perch and folded its wings. I saw a distinct white band. The wings opened and I saw a small orange spot—a female! I called out, “That’s one!” The kids turned around and, compliantly, she landed right beside them. All three saw the white band before she was off again. The butterfly was a slightly darker blue than all the others, Lily noted. I had noticed the same thing.

Within moments, our encounter with the Miami blue seemed unreal. It had come and gone, and we silently turned our gazes back to the nickerbean. Then Lily said, smiling: “It’s like we actually found the needle in the haystack.” Max and Charlotte nodded, still staring at the nickerbean. Sometimes the search for treasure pays off. My children had learned the value of paying careful attention to detail and of patience and perseverance; they had seen one of the rarest creatures on Earth. In that silent moment, they too could feel the fleeting beauty of life. And there is no way to value existence more than to understand that it can flit to oblivion in a second.

Lindsey Truitt is a writer and landscape designer based in Washington, D.C.

A large subfamily of miniature butterflies, the Polyommatinae—or “true blues”—inhabit every continent except Antarctica. Like the Miami blue, most of the world’s approximately 1,400 blue butterfly species have wingspans of less than an inch. In most species, only males are blue—and only on their topsides. While scientists are still discovering new Polyommatinae, especially in the high Andes of South America, many known species are declining. In the United States, 7 of 18 butterflies on the Endangered Species List are blues, and the first North American butterfly known to become extinct was the Xerces blue.

These days, the average American child spends 44 hours a week—or more than 6 hours a day—plopped in front of a TV, video or computer screen. The result: far fewer hours spent outdoors exploring and experiencing the wonders of nature than children did in the past. The shift is historic—and troubling. “Throughout the course of humankind, our kids have always spent a lot of time outside,” says Kevin Coyle, NWF’s vice president for education and training. “This is the first generation where that is not the case.”

He cites a few of the well-documented tolls of an indoor childhood:

Increasing lack of creativity and concentration and a decline in social skills;

Doubling of the childhood obesity rate, which adds about $100 billion annually to the cost of public health care;

An increase in the number of antidepressants prescribed for U.S. children over the past decade;

A future generation of citizens who feel no connection to nature and are therefore less likely to support environmental causes.
A new NWF campaign—Be Out There™—is trying to turn that tide before it’s too late. Building on the experiences of the organization’s Connecting People With Nature program, the effort specifically targets mothers. “We’ve realized that if we want to make significant changes in the behavior of our children, we have to start with the gatekeepers, and that means moms are key,” says the campaign’s executive director, Rebecca Garland.

The campaign’s strategy, says Garland, will be “to leverage existing programs, making a more solid appeal to moms specifically. Basically, we’re going to be doing even more of what we’re already good at.” Specific Be Out There tools will include Ranger Rick® and other NWF children’s publications, the backyard and schoolyard habitats programs, and advocacy at both the state and national level. The campaign will rely heavily on corporate partnerships, public relations and online communications, says Garland, noting that “the average mom goes online ten times a day, mostly to get information or buy products for her children.”

The campaign’s goal is to reach 22 million Americans over the next five years, specifically aiming to benefit children 12 and under. “Research has shown that if kids have positive outdoor experiences at a young age, they will become lovers of wildlife and nature and turn into stewards of the environment as they grow older,” says Garland. The official launch of Be Out There will take place June 27, the fifth anniversary of NWF’s successful and growing Great American Backyard Campout®. Learn more about the Be Out There campaign.