Why the Chili Got Its Sting

In a remote region of Bolivia, scientists search for the evolutionary culprit behind the popular fruit’s fiery flavor 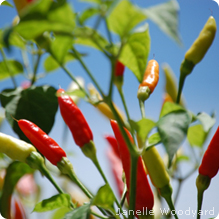 Folks in Belize do it. The Szechuanese do it. Gumbo gourmands in New Orleans do it. You probably do it, too: scorch your tongue with fiery chili peppers. Researchers think the taste for hot food arose in the Tropics where people benefited from chili peppers’ ability to combat spoilage. Keeping microbes at bay with hot chilies staves off gastrointestinal distress, and worse. But how and why chilies got their heat in the first place has remained mysterious until recently—and the results are a bit of a surprise.

The search began in 2001, when a University of Washington team traveled to the dry Chaco lowlands of southeastern Bolivia and up into the Andean foothills. The scientists headed there because, unlike in most chili habitats, species in this region can come in two varieties: some hot, some not. Maintaining a molecular torch demands extra energy, and chilies wouldn’t have developed the fiery trait unless it offered a survival benefit—what biologists call a selective advantage over chilies that don’t crank up the heat. The region with both kinds of chilies made for a natural experiment. “We wanted to study chilies that hadn’t ‘decided’ to become hot yet,” says Josh Tewksbury, an evolutionary biologist who led the research team.

The scientists already knew that the chilies’ fire was not a defense against birds. Birds cannot sense the pepper’s chemical Molotov cocktail, called capsaicin. Mockingbirds, thrashers and flycatchers called small-billed elaenias eat the peppers and disperse their seeds. Voracious mammals were the best guess. Mice and piglike javelinas destroy chili seeds when they devour the fruit. Their heat-sensing neurons—like ours—feel capsaicin’s burn.

“But the real culprit, it turns out, was killing the seeds before the mammals even had a chance,” says Tewksbury. Capsaicin’s target, he says, is a seed-rotting fungus that spreads down bore holes made by insects.

In Bolivia, Tewksbury discovered that where fungus pressure is high, the peppers are hot. Where infestation is low, many peppers lack the fiery defense. In later laboratory work, he and his colleagues found that the hottest peppers can significantly cut down microbial infection compared to their nonpungent cousins. They published their findings last summer in the Proceedings of the National Academy of Sciences.

Tewksbury is among a growing cadre of biologists beginning to uncover the power of viruses, bacteria and fungi to sculpt evolution. Some of the microbes are parasites, like the chili fungus, and some are mutualists that gain food or shelter while they benefit their host. “We don’t yet understand the role of most of the microbes we are finding in animals and plants, but I bet they are not there by chance,” says Tewksbury. “They’re either parasites or mutualists.”

His research also points to a smart place to look for plant sources of potential new drugs. “What you’re usually looking for in a drug is a compound that hurts other things more than it hurts us,” says Tewksbury. “Plants are doing this all the time. They’re trying to entice pollinators and at the same time deter predators. So, you want to look in places where this conflicting selection pressure is playing out: in the fruit and nectar.”

While capsaicin helps the chilies, the chilies continue to help us. In Bolivia and neighboring countries, the largest indigenous group, the Guarani, eat hot chilies to reduce risk of infection from food. “They eat only the hot peppers, not the mild ones,” says Tewksbury.

Science writer Wallace Ravven is based in California.