Passion with a Purpose

With help from NWF, a Conservation Photographer of the Year is using an innovative approach to teach young children about global warming 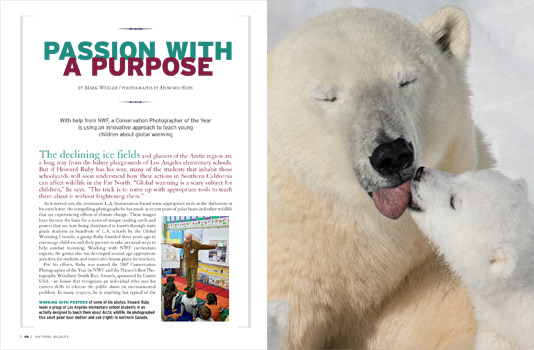 THE DECLINING ICE FIELDS and glaciers of the Arctic region are a long way from the balmy playgrounds of Los Angeles elementary schools. But if Howard Ruby has his way, many of the students that inhabit those schoolyards will soon understand how their actions in Southern California can affect wildlife in the Far North. “Global warming is a scary subject for children,” he says. “The trick is to come up with appropriate tools to teach them about it without frightening them.”

As it turned out, the prominent L.A. businessman found some appropriate tools in the darkroom in his own home: the compelling photographs he has made in recent years of polar bears and other wildlife that are experiencing effects of climate change. Those images have become the basis for a series of unique trading cards and posters that are now being distributed to fourth through sixth grade students in hundreds of L.A. schools by the Global Warming Crusade, a group Ruby founded three years ago to encourage children and their parents to take personal steps to help combat warming. Working with NWF curriculum experts, the group also has developed several age-appropriate activities for students and innovative lesson plans for teachers.

For his efforts, Ruby was named the 2007 Conservation Photographer of the Year by NWF and the Nature’s Best Photography Windland Smith Rice Awards, sponsored by Canon USA—an honor that recognizes an individual who uses his camera skills to educate the public about an environmental problem. In many respects, he is anything but typical of the kind of people who pursue wildlife photography in some of the planet’s most remote places.

As the chairman of Oakwood Worldwide, Ruby oversees the nation’s largest provider of temporary housing. Now 73, he also has reached an age when most people are thinking about retirement rather than pursuing a strenuous second career. And to complicate matters, he suffers from a debilitating eye disease. “I’m not interested in making money from photography,” he says. “For me, it’s become a passion with a purpose.”

That purpose began to crystallize five years ago when Ruby took his first trip to western Hudson Bay in northern Manitoba to see polar bears. At the time, he was skeptical about the effects of global warming. But on that trip, he saw firsthand how climate change was affecting the animals’ ability to produce healthy offspring. “It was heartbreaking,” he says. 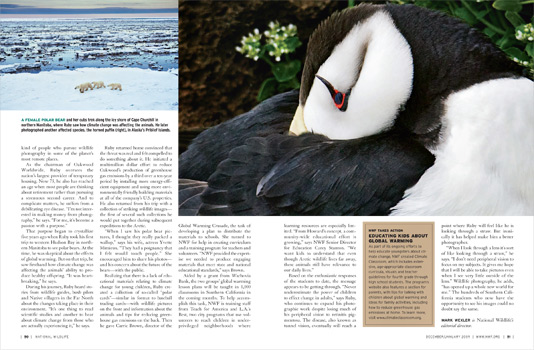 During his journey, Ruby heard stories from wildlife guides, bush pilots and Native villagers in the Far North about the changes taking place in their environment. “It’s one thing to read scientific studies and another to hear about climate change from those who are actually experiencing it,” he says.

Ruby returned home convinced that the threat was real and felt compelled to do something about it. He initiated a multimillion dollar effort to reduce Oakwood’s production of greenhouse gas emissions by a third over a ten-year period by installing more energy-efficient equipment and using more environmentally friendly building materials at all of the company’s U.S. properties. He also returned from his trip with a collection of striking wildlife images—the first of several such collections he would put together during subsequent expeditions to the Arctic.

“When I saw his polar bear pictures, I thought they really packed a wallop,” says his wife, actress Yvette Mimieux. “They had a poignancy that I felt would touch people.” She encouraged him to share his photos—and his concern about the future of the bears—with the public.

Realizing that there is a lack of educational materials relating to climate change for young children, Ruby created a collection of so-called “polar cards”—similar in format to baseball trading cards—with wildlife pictures on the front and information about the animals and tips for reducing greenhouse gas emissions on the back. Then he gave Carrie Brown, director of the Global Warming Crusade, the task of developing a plan to distribute the materials to schools. She turned to NWF for help in creating curriculum and a training program for teachers and volunteers. “NWF provided the expertise we needed to produce engaging materials that meet state and national educational standards,” says Brown.

Aided by a grant from Wachovia Bank, the two groups’ global warming lesson plans will be taught in 1,000 classrooms in Southern California in the coming months. To help accomplish this task, NWF is training staff from Teach for America and L.A.’s Best, two city programs that use volunteers to reach children in underprivileged neighborhoods where learning resources are especially limited. “From Howard’s concept, a community-wide educational effort is growing,” says NWF Senior Director for Education Carey Stanton. “We want kids to understand that even though Arctic wildlife lives far away, these animals still have relevance to our daily lives.”

Based on the enthusiastic responses of the students to date, the message appears to be getting through. “Never underestimate the power of children to effect change in adults,” says Ruby, who continues to expand his photographic work despite losing much of his peripheral vision to retinitis pigmentosa. The disease, also known as tunnel vision, eventually will reach a point where Ruby will feel like he is looking through a straw. But ironically it has helped make him a better photographer.

“When I look through a lens it’s sort of like looking through a straw,” he says. “I don’t need peripheral vision to focus on my subjects. It gives me hope that I will be able to take pictures even when I see very little outside of the lens.” Wildlife photography, he adds, “has opened up a whole new world for me.” The hundreds of Southern California students who now have the opportunity to see his images could no doubt say the same.

As part of its ongoing efforts to help educate youngsters about climate change, NWF created Climate Classroom, which includes extensive, age-appropriate classroom curricula, visuals and teacher guidelines for fourth grade through high school students. The program’s website also features a section for parents, with tips for talking with children about global warming and ideas for family activities, including how to reduce greenhouse gas emissions at home. To learn more, visit www.climateclassroom.org.

NWF is supporting and shaping federal legislation to combat the global warming that is affecting species from the narwhal in the Arctic to birds in the U.S. Midwest to the myriad creatures of the tropical rain forests. The NWF Campus Ecology® program is promoting climate leadership and sustainability among colleges and universities by providing resources and technical support, and NWF is helping to create elementary and high school curricula about global warming and its remedies. For more information on these and other NWF global warming projects, go to www.nwf.org/globalwarming.