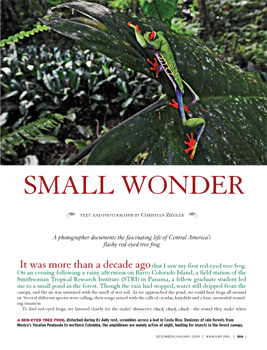 IT WAS MORE than a decade ago that I saw my first red-eyed tree frog. On an evening following a rainy afternoon on Barro Colorado Island, a field station of the Smithsonian Tropical Research Institute (STRI) in Panama, a fellow graduate student led me to a small pond in the forest. Though the rain had stopped, water still dripped from the canopy, and the air was saturated with the smell of wet soil. As we approached the pond, we could hear frogs all around us. Several different species were calling, their songs mixed with the calls of cicadas, katydids and a lone, mournful-sounding tinamou.

To find red-eyed frogs, we listened closely for the males’ distinctive chock, chock, chock—the sound they make when they’ve come down from the canopy to mate. Soon we heard it, and after a minute of searching, our headlamps illuminated an amazing creature: a two-inch-long, grassy green frog sporting oversized orange feet, enormous red eyes and neon yellow and blue stripes along the sides. It was one of the most beautiful animals I had ever seen. The scientist who named Agalychnis callidryas must have been equally impressed: Callidryas translates to “beautiful wood nymph.”

An inhabitant of lowland tropical forests from the Yucatan to northern Colombia, the red-eyed tree frog has an intriguing natural history. For the majority of its life, the frog lives in the forest canopy, resting during the day and hunting for small insects at night. But after a big rainstorm, particularly at the beginning of the rainy season, males descend from the canopy en masse to converge around small ponds. Dozens, sometimes hundreds, of the animals perch in foliage overhanging the pond, all singing their hearts out to try and attract one of a handful of females that will come down a few hours later. 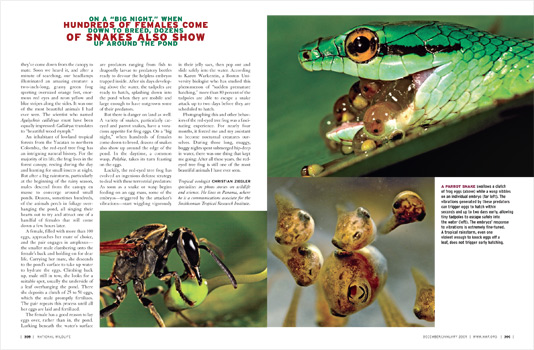 A female, filled with more than 100 eggs, approaches her mate of choice, and the pair engages in amplexus—the smaller male clambering onto the female’s back and holding on for dear life. Carrying her mate, she descends to the pond’s surface to take up water to hydrate the eggs. Climbing back up, male still in tow, she looks for a suitable spot, usually the underside of a leaf overhanging the pond. There she deposits a clutch of 25 to 50 eggs, which the male promptly fertilizes. The pair repeats this process until all her eggs are laid and fertilized.

The female has a good reason to lay eggs over, rather than in, the pond. Lurking beneath the water’s surface are predators ranging from fish to dragonfly larvae to predatory beetles ready to devour the helpless embryos trapped inside. After six days developing above the water, the tadpoles are ready to hatch, splashing down into the pond when they are mobile and large enough to have outgrown some of their predators. 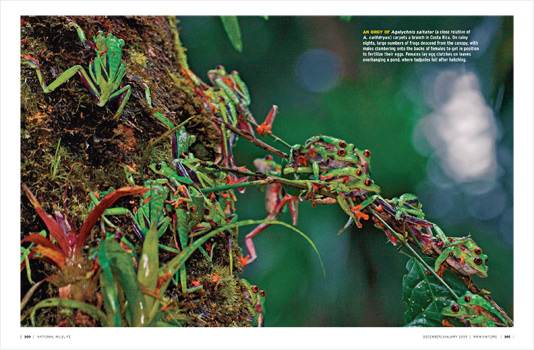 But there is danger on land as well. A variety of snakes, particularly cat-eyed and parrot snakes, have a voracious appetite for frog eggs. On a “big night,” when hundreds of females come down to breed, dozens of snakes also show up around the edge of the pond. In the daytime, a common wasp, Polybia, takes its turn feasting on the eggs.

Luckily, the red-eyed tree frog has evolved an ingenious defense strategy to deal with these terrestrial predators: As soon as a snake or wasp begins feeding on an egg mass, some of the embryos—triggered by the attacker’s vibrations—start wiggling vigorously in their jelly sacs, then pop out and slide safely into the water. According to Karen Warkentin, a Boston University biologist who has studied this phenomenon of “sudden premature hatching,” more than 80 percent of the tadpoles are able to escape a snake attack up to two days before they are scheduled to hatch. 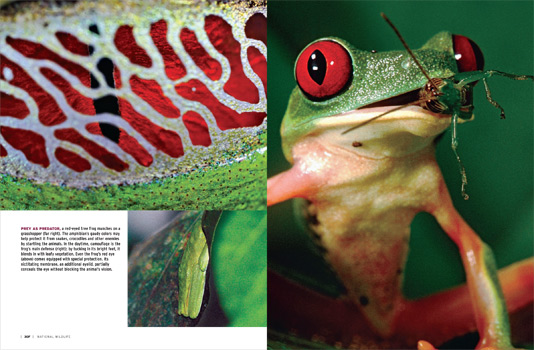 Photographing this and other behaviors of the red-eyed tree frog was a fascinating experience. For nearly four months, it forced me and my assistant to become nocturnal creatures ourselves. During those long, muggy, buggy nights spent submerged hip-deep in water, there was one thing that kept me going: After all these years, the red-eyed tree frog is still one of the most beautiful animals I have ever seen.

Tropical ecologist Christian Ziegler specializes in photo stories on wildlife and science. He lives in Panama, where he is a communications associate for the Smithsonian Tropical Research Institute.