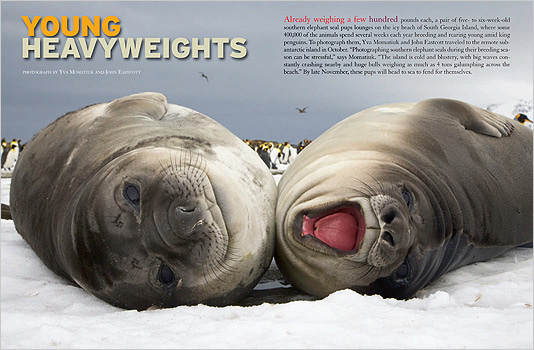 Already weighing a few hundred pounds each, a pair of five- to six-week-old southern elephant seal pups lounges on the icy beach of South Georgia Island, where some 400,000 of the animals spend several weeks each year breeding and rearing young amid king penguins. To photograph them, Yva Momatiuk and John Eastcott traveled to the remote subantarctic island in October. “Photographing southern elephant seals during their breeding season can be stressful,” says Momatiuk. “The island is cold and blustery, with big waves constantly crashing nearby and huge bulls weighing as much as 4 tons galumphing across the beach.” By late November, these pups will head to sea to fend for themselves.