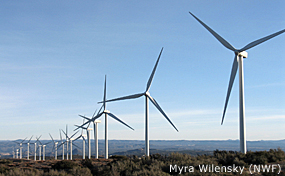 Two new NWF reports issued this spring—one focusing on plant-based energy sources and the other on the potential for generating clean energy on Indian lands—suggest that changes in policies could create jobs, curb global warming and protect wildlife.

“We need a new road map,” says Julie Sibbing, an NWF conservation program director and coauthor of Growing a Green Energy Future. While harvesting plant materials to produce energy has long been recognized as an important strategy for helping the nation move away from fossil fuels, current national policies have created an unsustainable first generation of biofuels, according to the report. Rather than subsidizing inefficient practices, the report recommends establishing standards that ensure bioenergy sources do not contribute to environmental degradation and creating incentives that reward innovation.

“Successful, sustainable bioenergy projects have started to take root in the United States, yet are not being adequately supported by current federal policies,” says Sibbing. Examples in the report include businesses that are producing energy using native grasses, wood waste and even forest debris from Hurricane Rita. Perennial grasses grown on marginal lands, studies suggest, can produce two to three times more energy per acre than existing grain crops—with fewer up-front costs.

“As the nation turns to biomass crops for energy, the capacity to reduce global warming pollution and the ability of the landscape to continue regenerating biomass must be the foremost consideration,” says Sibbing.


With 95 million acres of land under their management and centuries of experience conserving the natural world, Indian tribes can play a significant role in protecting natural resources from climate change, says Steve Torbit, director of NWF’s Rocky Mountain Regional Center. NWF, in collaboration with the National Tribal Environmental Council, Native American Rights Fund and Intertribal Council on Utility Policy, developed The New Energy Future in Indian Country to showcase the opportunities tribes have to implement renewable energy strategies and participate in the green economy. The report details case studies of wind (Campo Kumeyaay Nation, above), solar, geothermal and biomass production.

“Tribal households pay significantly more in home energy expenses than other Americans,” says Bob Gruenig of the National Tribal Environmental Council. “The vast potential on tribal lands to generate clean energy from renewable resources means that Indian tribes can help to provide for their own energy needs.”

To help monitor the impact of the BP oil spill on wildlife populations and habitat, NWF and its gulf state affiliates are organizing and deploying teams of volunteers to observe the Gulf Coast shoreline. Among other duties, they will help locate and identify oiled or otherwise injured animals and alert trained rescue teams. For information about the surveillance network, visit www.nwf.org/oilspillvolunteers.

NWF has scored another victory in its push to improve the environmental performance of Brazil’s cattle industry. Last May, the Leather Working Group—a prominent buyers group that includes Puma, Nike, New Balance Athletic Shoe and Clarks International—agreed to a new “traceability requirement” to ensure that members’ leather products originating in Brazil have not resulted in further deforestation of the Amazon.

Nathalie Walker, manager of NWF’s Climate Change, Deforestation & Agriculture Project, who helped bring about the requirement, calls the development “extremely encouraging. It sends an important message to other producers in the Amazon that there is strong international demand for forest-friendly leather.”

Promoting better ranching practices—which require less land—is critical: Half of all tropical deforestation on Earth takes place in the Brazilian Amazon, where 80 percent of deforested land is turned into cattle pasture. Ranching is also the largest source of greenhouse gases in Brazil. To learn more, go to www.nwf.org/deforestation.

The scorecard rates retailers and manufacturers on the availability of Forest Stewardship Council (FSC) certified products in their wooden outdoor furniture collections. The FSC logo identifies sustainable wood products that are harvested in a manner that protects water, soil and wildlife habitat, as well as community and indigenous peoples’ interests.

“The scorecard is a clear and essential guide that helps people make Earth-friendly furniture purchases for their garden or backyard,” says Stacy Brown, NWF’s northeast forest climate manager. Companies received a rating of up to five stars based on the percentage of their products that are made from sustainably harvested tropical wood. This year’s rankings included more companies than ever rated at four or five stars.

Off the Couch and Into Nature

Organizations work together to promote physical activity and more time outdoors “There’s strength in numbers,” the old adage goes. So NWF is collaborating with a diverse community of businesses and nonprofits to ensure the movement to get kids off the couch and into nature is a success.

In June NWF partnered with YMCA of the USA, REI, Sierra Club, Izaak Walton League of America, The Outdoor Foundation, National Recreation and Park Association and the Children & Nature Network to form the Outdoors Alliance for Kids. The coalition seeks to “strengthen the connections between land conservation and time spent outdoors, empower youth leaders to advance the reconnecting with nature movement, and promote resources and events that help people reconnect with the great outdoors,” says Patrick Fitzgerald, NWF’s director of education advocacy.

NWF is also part of the broad coalition that helped to draft and will be implementing the recently released National Physical Activity Plan, a sweeping initiative to improve public health. The plan includes strategies for motivating people in every community to become and stay physically active and for removing the barriers that may stand in their way. Together with Sierra Club, NWF is leading efforts to advocate for more opportunities for physical activity in open spaces and community outdoor recreation areas.

NWF recently welcomed New Jersey Audubon Society as its 47th staff affiliate organization. Founded in 1897, the nonprofit “is a historic conservation leader in New Jersey,” says NWF President Larry Schweiger, “and our common efforts to restore and protect wildlife and its habitat, combat global warming and connect people with nature make this a natural partnership.”

NWF Teams Up with JOHNSON’S® NATURAL™

National Wildlife Federation is pleased to partner with JOHNSON’S® brand in the company’s launch of JOHNSON’S® NATURAL™, a new line of naturally derived baby care products now available nationwide. JOHNSON’S NATURAL, which includes five products for babies and kids, gently cleanses and moisturizes skin and hair with the unique combination of at least 98 percent plant- and fruit-sourced ingredients. JOHNSON’S NATURAL is free of dyes, parabens and essential oils.

Committed to helping parents connect their children with nature, NWF and JOHNSON’S NATURALS offer tools and age-appropriate activities for families with babies and young children. For information on keeping kids happy and protected while enjoying the great outdoors, visit www.nwf.org/naturalbaby. Among other topics, the site includes tips for creating an outdoor nursery, dressing for the weather and packing for kid-friendly adventures.

It’s All About the Owls

National Wildlife Federation is teaming up with the film Legend of the Guardians: The Owls of Ga’Hoole to extend the movie’s lessons and inspire kids and families to learn about wildlife and protect habitat. The film opens in 3D nationwide on September 24, with NWF serving as the production’s official education partner.

Acclaimed filmmaker Zack Snyder, who makes his animation debut with Legend of the Guardians, was inspired to make the movie by the beloved Guardians of Ga’Hoole series of books by Kathryn Lasky. He and his wife, Deborah Snyder, the film’s executive producer, were encouraged to pursue the project after they heard owls calling outside their home. The movie follows the adventures of Soren, a young owl that loves to hear his father’s epic stories about their ancestors. The youngster soon embarks on his own daring quest to find his heroes and save all of owlkind.

“Legend of the Guardians beautifully portrays many different species of owls. We hope the film and the popularity of the books will inspire people of all ages to learn more about these amazing birds, and use the online resources we’ve created to get outside and discover nature,” says Carey Stanton, NWF senior director for education.

NWF also is asking children and their parents to help save “owlkind” and play an important role in wildlife conservation with symbolic adoptions of the species featured in the film. These adoptions help NWF in its efforts to protect and recover wildlife habitat, and to educate people to appreciate nature right outside their doors.

As part of the effort, families, youngsters and classrooms can organize adoption fundraising parties using the games and crafts in the Legend of the Guardians activity guide created by the Federation.