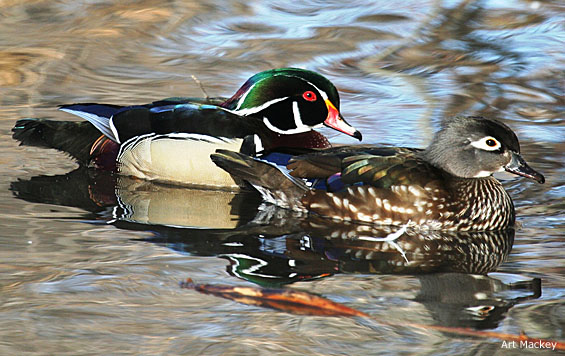 Working with other members of the Corps Reform Network, NWF recently convinced federal lawmakers to remove two riders from the Senate Energy and Water Appropriations Bill that would have supported the St. Johns-New Madrid Floodway project on the Mississippi River, threatening wildlife habitat and nearby towns.

Designed to benefit a handful of soybean farmers by allowing them to increase the acreage they farm, the project would have put a number of communities, such as Cairo, Illinois, at greater flood risk. It also would have eliminated as many as 75,000 acres of habitat for fish and migratory birds such as wood ducks (above).

“By preserving the natural and beneficial functions of this remaining Mississippi River floodplain, we made a huge difference for public safety and for wildlife habitat,” says George Sorvalis, manager of NWF water resources campaigns and Corps Reform Network coordinator, who along with other representatives of the coalition visited the towns that were threatened by the project. Those visits, in turn, spawned complaints by local authorities to congressional leaders.

A U.S. district court originally halted this project in 2007 because of its ecological impacts and its failure to comply with the Clean Water Act and the National Environmental Policy Act (NEPA). In addition, the court ordered the Corps to tear down structures already built and to restore the project site to its natural condition. The riders, inserted into the bill by Senator Kit Bond of Missouri, sought to thwart the court order by rescinding the Corps’ deconstruction money.

In other parts of the country, NWF also scored some important conservation victories. In Florida, a federal court ruled last fall in favor of NWF, the Florida Wildlife Federation and other groups that filed a lawsuit against the Army Corps and the U.S. Fish and Wildlife Service. In doing so, the court agreed that the two agencies violated the U.S. Endangered Species Act and NEPA when they approved a massive residential and golf course development involving Florida’s Cocohatchee Slough, which carries water along the western Everglades into the Gulf of Mexico. The proposed development, called Mirasol, would have destroyed 645 acres of wetlands essential for endangered wood storks. “This court decision is a tremendous victory for wildlife,” says John Kostyack, NWF director of wildlife conservation and global warming.

Thanks in large part to action by NWF and its local affiliate, the governor of the U.S. Virgin Islands recently rejected a proposal to dredge the St. Thomas Harbor to accommodate docks for large cruise ships and to dispose of dredged material in Lindbergh Bay, home to globally endangered sea turtles and corals. NWF and the Virgin Islands Conservation Society filed objections to the disposal site before the Bureau of Land Use Appeals, citing the project’s devastating effects and highlighting more environmentally friendly disposal options.

Workshops, guest-speaker presentations and a nationwide webcast are among the events scheduled for NWF’s 74th annual meeting, which will take place April 8-10 at the J.W. Marriott in Houston, Texas. This year’s theme is “Be Out There: Connecting Children and the Outdoors.” For more details, including registration information, email events@nwf.org or call 703-438-6299.

Students and community members rallied at 11 regional summits this past fall to urge President Obama and Congress to pass a clean energy jobs bill. As a founding member of the Energy Action Coalition (EAC)—a group formed in 2004 and powered by young people who want to steer the country away from its dependence on dirty energy—NWF helped lead events in Michigan, North Carolina and Florida.

Part of EAC’s Power Shift ’09 campaign to demand bold action on climate and energy, the summits allowed youth leaders to network, attend workshops and engage in public-service projects. At the Michigan summit in Lansing, for example, participants started a bike co-op for the city, providing a clean alternative transportation method to residents.

“These events helped to empower thousands of young people across the country to begin transitioning to more efficient, clean and renewable energy sources on their campuses and in their communities,” says NWF Southeast Campus Field Coordinator Carly Queen. Visit NWF's Campus Ecology® website.

A group of young people in Atlanta set an ambitious goal for themselves in fall 2007: raise funds to obtain and install one million energy-saving compact fluorescent light bulbs (CFLs) in low-income households by 2013. To help them achieve their goal of introducing green solutions to the target community, NWF provided seed money to get the project off the ground—and some volunteer assistance.

At this writing, more than 20,000 CFLs have been distributed by the student-led Let’s Raise a Million organization with support from its partners. Local college students and teens enrolled in NWF’s Earth Tomorrow® program provide the bulbs to residents free of charge and, during installation, offer information on other ways to reduce home energy consumption.

“The community is excited,” says Na’Taki Osborne Jelks, manager of NWF’s community and leadership development programs. Being able to connect with residents where they live and help them reduce their carbon emissions is really important, she adds.

Every CFL that’s installed prevents 350 pounds of coal from being burned at nearby power plants during its lifetime, according to Tony Anderson, cofounder of Let’s Raise a Million. “It’s a small dent,” he says, “but a dent nonetheless—and you save money.” The group projects that once all the CFLs are installed, there will be an annual savings of $40 million among the households.

NWF’s newest state affiliate is Citizens for Pennsylvania’s Future (PennFuture). Working from the premise that “every environmental victory grows the economy,” the public-interest group has successfully advocated for landmark conservation legislation, including passage of Pennsylvania’s largest-ever environmental funding bond and a law requiring a statewide climate change action plan. “PennFuture is a powerhouse organization, and our common efforts to restore and protect wildlife and habitat, combat global warming and connect people with nature make this a natural partnership,” says NWF President Larry Schweiger.

Held annually since 1938, National Wildlife Week is the Federation’s longest-running education program. This year’s celebration, March 15-19, will encourage nature exploration. Eco-kids (both young and old!) can take part in a wide range of outdoor activities at home, at school or in their community.

Girl of the Year: Backyard Explorer

NWF is teaming up with American Girl® as they introduce Lanie™, their 2010 Girl of the Year®. Lanie, a ten-year-old who loves science and nature, considers herself an “outside” girl trapped in an “indoor” family. Lanie dreams of outdoor adventures in far-off places—but then she discovers the joys of butterfly gardening and camping right in her own backyard. Kids and grown-ups can log on to www.americangirl.com/girloftheyear to learn more about the young explorer and to see the Lanie books, doll and other products. The site also includes tips from NWF on how to connect with nature. NWF appreciates American Girl’s support of the Be Out There™ program, which encourages daily outdoor play.

Lend a Hand to Help Wildlife

Enjoy gardening? Working with kids? Are you a computer whiz? NWF offers dozens of regional volunteer opportunities to match your interests and skills.

Grasslands are among the most imperiled ecosystems in the world, and the Charles M. Russell National Wildlife Refuge (CMR) in north-central Montana contains some of the largest expanses of intact prairie in North America. To help preserve this habitat for wildlife species such as elk and sharp-tailed grouse, NWF teamed up with the World Wildlife Fund to find cattle ranchers willing to give up their refuge grazing rights and end competition for forage.

Building on the success of NWF’s efforts around Yellowstone National Park, where more than 550,000 acres have been “retired” to date, the groups finalized agreements in November that ended livestock grazing on 45,000 acres within CMR. Importantly, these lands are located in the area where the American Prairie Foundation plans to create a reserve that might someday sustain a free-roaming bison herd.

“We’re hopeful that this initial success will result in more retirements on the CMR,” says NWF Special Projects Coordinator Hank Fischer. “Our goal is to have it become the wildlife refuge it should be.

“We’re not trying to put ranchers out of business,” Fischer adds, explaining that producers received payments to secure grazing lands elsewhere. “These retirements succeed because they work for both parties.”

Environmental Protection Agency announcement in December that it had finalized its finding that global warming pollution “endangers public health and welfare” under the Clean Air Act—the single largest step the government has taken to confront global warming to date.

Interior Appropriations Bill, signed by President Obama in October, which provided billions to help agencies protect wildlife and wild places, including an $475 million for restoring the Great Lakes.