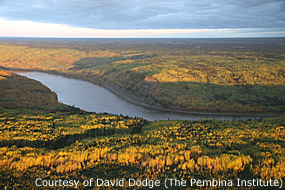 A new NWF report warns that a proposed $12-billion pipeline designed to carry tar sands oil from Alberta, Canada, to the Texas gulf coast could produce potentially dangerous spills because the project calls for safety shortcuts and substandard materials. Staying Hooked on a Dirty Fuel: Why Canadian Tar Sands Are a Bad Bet for the United States also looks at the dangers that tar sands development poses to the Canadian and U.S. environment.


Tar sands are pockets of sand, clay and bitumen, a heavy, black oil that can be extracted and refined for fuel. These processes require extensive road building, tailing ponds and industrial facilities and produce toxic substances such as cyanide, benzene and toluene. The Alberta site, which has significant bitumen deposits, also will require substantial logging of ancient boreal forests.

The Keystone XL pipeline, proposed by TransCanada Pipelines, would carry 900,000 barrels of bitumen daily from a site along the Athabasca River (above) near Fort McMurray, Alberta, across Montana, South Dakota, Nebraska, Kansas and Oklahoma on its way to Texas refineries. The current proposal asks for exemptions from existing federal laws to lower the standard for pipeline safety and allow use of thinner pipe, a cause of concern for those whose ranches and farms the pipe would cross. Pipeline representatives have repeatedly claimed that the chance of a spill is small and that the maximum leak would be a few barrels. However, NWF President Larry Schweiger contends that “as the BP oil spill disaster shows, Big Oil cannot be trusted to ensure its practices are safe. We cannot afford to bring the recklessness of the gulf into the American heartland.”

In July, as part of a national day of action against the pipeline, NWF supporters joined rallies across the country. NWF supporters also contributed more than 22,000 of the 100,000 comments sent to the U.S. Department of State by citizens opposing the pipeline. The department is responsible for drafting an environmental impact statement (EIS) on the project and for approving the pipeline.

The agency was likely to endorse the project this year, but the pipeline suffered a major setback in July when the U.S. Environmental Protection Agency criticized the department’s draft EIS, giving it the lowest possible rating: inadequate.

Even if the pipeline is approved, says Ryan Salmon, NWF policy coordinator for global warming, “the battle against tar sands development in general will continue. NWF will fight it in court in order to protect our natural resources.”

Yellowstone wildlife face tough odds when they wander outside park borders. Discover the challenges threatening iconic species such as bison, grizzlies and bighorn sheep and find out what you can do to help. Visit NWF's new Adopt a Wildlife Acre website for more details and the latest updates.

For parents who want their kids to be fit, focused and feeling good, the first step should be out the door. NWF has issued a report, Whole Child: Developing Mind, Body and Spirit through Outdoor Play, which reveals how U.S. childhood’s move inside during the last 20 years has affected children’s health and wellness.

“American kids are out of shape, tuned out and stressed out because they’re missing something essential to their health and development: unstructured time outdoors,” says NWF Senior Vice President of Education Kevin Coyle. “It’s not just about a loss of innocence, the detachment from all things growing and green. It’s a serious public health issue we all need to care about.”

Epidemic childhood obesity and rising rates of pediatric depression are among the effects discussed in the report, which reveals the ways in which nature can help combat these problems and improve quality of life. 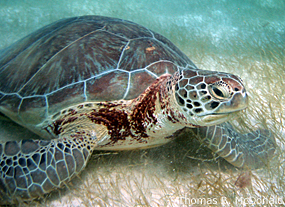 As the oil disaster continues to imperil sea turtles in the Gulf of Mexico, NWF and the Florida Wildlife Federation (FWF) are fighting to preserve key nesting sites for the marine reptiles. In July the groups filed a lawsuit against the Federal Emergency Management Agency (FEMA) for failing to protect endangered sea turtles from the impacts of its National Flood Insurance Program, which promotes development in vital habitat.

“Countless numbers of sea turtles are being poisoned and killed by the spill in the gulf,” says Manley Fuller, FWF president. “If we hope to give these majestic animals a fighting chance, it is imperative that we protect what remains of their nesting habitat along the Florida coast.” Ninety percent of all sea turtle nesting in the United States takes place on The Sunshine State’s beaches. Inappropriately sited coastal development can significantly impact sea turtles by discouraging females attempting to nest, disorienting hatchlings trying to reach the ocean and interfering with beach processes.

As part of their lawsuit, NWF and FWF seek a ruling that would require FEMA to consult with the U.S. Fish and Wildlife Service on the effects of its flood insurance program.

Volunteers Take to the Ground

NWF, its five gulf-state affiliates and other partners established a Gulf Coast Wildlife Surveillance Network to observe, track and report on impacts of the oil disaster.

Surveillance volunteers, mostly skilled wildlife observers such as birders and anglers who know gulf waters and shores, have been making weekly tours of the coast to note wildlife and habitat changes, such as absence of species or wildlife not behaving normally. When the volunteers encounter animals in need or oil in new areas, they contact rescue teams or the appropriate authorities.

“Volunteer observers play a critical role in gathering data documenting the spill’s ecological impacts on land and sea and how wildlife are adapting to these ecosystem changes,” says Eliza Russell, NWF education director.

“You never know when a bird will be oiled on land or in beach areas that I can report and get help for,” says wildlife photographer and volunteer Darlene Eschete, who regularly scouts Louisiana’s Terrebonne Parish in July. “You can only imagine how I feel about those birds drowning in the gooey crude oil,” she adds. “It’s heartbreaking.”

NWF is transitioning its volunteer efforts to focus on habitat restoration.

Growing a Greener World in the Garden

NWF’s Certified Wildlife Habitat™ program was recently featured in an episode of the new public television series Growing a Greener World. Visit the magazine’s online gardening section to view the program and to read about different ways wildlife gardeners across the country are greening their corners of the globe.

When Skagit Valley, Washington, was certified as a Community Wildlife Habitat in July, it became the 45th locale in the nation to earn this distinction. Dozens of other communities are currently working towards this goal.

Launched in the late 1990s to expand on efforts to encourage homeowners and schools to create havens for wildlife, the program supports citizens coming together to provide habitats at businesses, places of worship and other spaces as well. By eliminating pesticides and engaging in other eco-friendly gardening practices, says Paul, “communities become healthier for people and wildlife alike.”

View the list of certified and registered communities and find out how to launch an effort in your area.

“NWF is committed to making learning fun for kids, while also instilling in them a lifelong respect for wildlife and the environment,” says NWF’s Director of Production Tony Summers. “We think it is important to begin doing that with youngsters at a very early age.”

Built on solid educational guidelines from the National Association for the Education of Young Children, Wild Animal Baby Explorers’ 26 original weekly episodes cater to preschoolers’ individual learning styles with age-appropriate content. The groundbreaking series sweeps young viewers along on interactive explorations by land and by sea. Each episode includes a mystery to solve, encouraging kids to use all five senses as they investigate natural science concepts with the show’s five animated animal characters. Along the way, the series provides preschoolers with important learning tools, such as using deductive reasoning to compare colors and shapes, to help them undertake and understand their own scientific inquiries. It also showcases young children and families engaging in simple outdoor activities that help reinforce an appreciation for the natural world.

Check local listings for the time and day of showings in your area.

Bringing families and friends together for fresh air and fun is one of the goals of NWF’s Be Out There™ movement, which debuts the latest offering in its special events series this fall. A cross between a nature hike and a scavenger hunt, Hike & Seek™ adventures will take place in Chicago (October 2), Seattle (October 16) and Washington, D.C. (October 2). Visit the Hike & Seek website for event descriptions, registration information and details about volunteering.