Can You Hear Me Now?

From frogs to birds to insects, animals that vocalize in large groups must make themselves heard above the background clamor 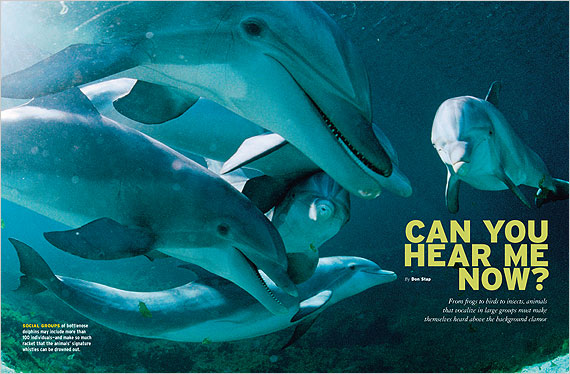 IT’S A COMMON PREDICAMENT: The party is loud. Dozens of voices overlap each other. It’s difficult to hear the person next to you, and you’re simultaneously trying to listen to the dulcet voice of an attractive stranger nearby. Scientists refer to this as the “cocktail party problem”—though they are thinking not of people, but of birds, frogs, insects and other creatures that vocalize in large groups.

When hundreds of frogs are calling all at once, how does a female tell one male from another and detect in his song something she deems worthy of attention? How in fact, when the noise has reached a level that if amphibians had laws someone would call the cops, can chorusing frogs distinguish one species from another? Understanding how animals communicate under such challenging conditions has attracted considerable attention in recent years. “It’s an exciting time to be working in this field,” says biologist Josh Schwartz of Pace University. “The technology has advanced so rapidly. We can set out an array of microphones and actually localize who’s calling and get an idea of what’s going on in these group situations.”

For years, Schwartz has been studying the gray treefrog, a species native to wetlands throughout the northeastern and central United States. Male frogs produce advertisement calls that consist of a series of “pulses”—which we hear as a trill—the structure, number and timing of which is important in attracting a mate. Males position themselves near the water’s edge and begin calling around sunset. When only a few frogs are vocalizing, they produce short trills, but in some areas as many as 100 or more may crowd into half an acre. The males then produce longer trills. And rather than a cocktail party, Schwartz says, “It’s almost like a frat party. There are far more males than females so the competition is fierce.”

When males lengthen their trills, they also give them less frequently. Schwartz suspects this may be a way of ensuring their calls stand out from the chorus, and evidence suggests that females prefer males that give longer trills. “But this is not always the case,” he says. “We’ve been puzzling over this for 20 years or more.” 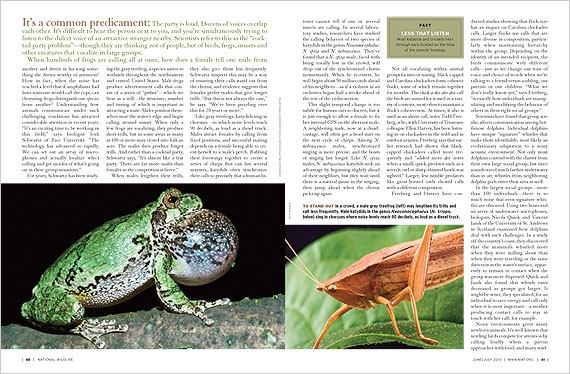 Like gray treefrogs, katydids sing in choruses—in which noise levels reach 90 decibels, as loud as a diesel truck. Males attract females by calling from fixed positions, and successful mating depends on a female being able to orient herself to a male’s perch. Rubbing their forewings together to create a series of chirps that can last several minutes, katydids often synchronize their calls so precisely that a human listener cannot tell if one or several insects are calling. In several laboratory studies, researchers have studied the calling behavior of two species of katydids in the genus Neoconocephalus: N. spiza and N. nebrascensis. They’ve found that a N. spiza male, faced with being vocally lost in the crowd, will drop out of the synchronized chorus momentarily. When he re-enters, he will begin about 50 milliseconds ahead of his neighbors—as if a violinist in an orchestra began half a stroke ahead of the rest of the violin section.

This slight temporal change is too subtle for human ears to discern, but it is just enough to allow a female to fix her internal GPS on the aberrant male. A neighboring male, now at a disadvantage, will often get a head start on the next cycle of chirps. Among N. nebrascensis males, synchronized singing is more precise, and the bouts of singing last longer. Like N. spiza males, N. nebrascensis katydids seek an advantage by beginning slightly ahead of their neighbors, but they wait until there is a natural pause in the singing, then jump ahead when the chorus picks up again.

Not all vocalizing within animal groups focuses on mating. Black-capped and Carolina chickadees form cohesive flocks, some of which remain together for months. The chick-a-dee-dee-dee call the birds are named for is used in a variety of contexts, most often to maintain a flock’s cohesiveness. At times, it also is used as an alarm call, notes Todd Freeberg, who, with University of Tennessee colleague Ellen Harvey, has been listening in on chickadees in the wild and in outdoor aviaries. Freeberg says that earlier research had shown that black-capped chickadees called more frequently and “added more dee notes when a small, quick predator such as a screech owl or sharp-shinned hawk was sighted.” Larger, less nimble predators like great-horned owls elicited calls with a different composition.

Freeberg and Harvey have conducted studies showing that flock size has an impact on Carolina chickadee calls. Larger flocks use calls that are more diverse in composition, particularly when maintaining hierarchy within the group. Depending on the identity of an intended recipient, the birds communicate with different calls—just as we change our tone of voice and choice of words when we’re talking to a friend versus a sibling, our parents or our children. “What we don’t really know yet,” says Freeberg, “is exactly how individuals are manipulating and modifying the behavior of others in these tight social groups.”

Scientists have found that group size also affects communication among bottlenose dolphins. Individual dolphins have unique “signature” whistles that make them identifiable, most likely an evolutionary adaptation to a noisy acoustic environment. Not only must dolphins contend with the chatter from their own large social group, but since sounds travel much farther underwater than in air, whistles from neighboring dolphin pods enter their area as well.

In the largest social groups—more than 100 individuals—there is so much noise that even signature whistles are obscured. Using two boats and an array of underwater microphones, biologists Nicola Quick and Vincent Janik of the University of St. Andrews in Scotland examined how dolphins deal with such challenges. In a study off the country’s coast, they discovered that the mammals whistled more when they were milling about than when they were traveling in the same direction at the water’s surface, apparently to remain in contact when the group was more dispersed. Quick and Janik also found that whistle rates decreased as groups got larger. It might be wiser, they speculated, for an individual to save energy and call only when it is most important—a mother producing contact calls to stay in touch with her calf, for example. 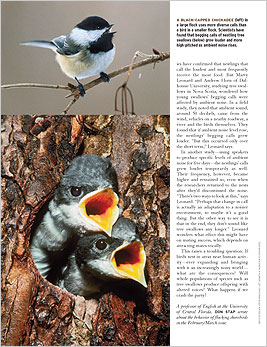 Noisy environments greet many newborn animals. It’s well known that nestling birds compete for attention by calling loudly when a parent approaches with food, and many studies have confirmed that nestlings that call the loudest and most frequently receive the most food. But Marty Leonard and Andrew Horn of Dalhousie University, studying tree swallows in Nova Scotia, wondered how young swallows’ begging calls were affected by ambient noise. In a field study, they noted that ambient sound, around 50 decibels, came from the wind, vehicles on a nearby roadway, a river and the birds themselves. They found that if ambient noise level rose, the nestlings’ begging calls grew louder. “But this occurred only over the short term,” Leonard says.

In another study—using speakers to produce specific levels of ambient noise for five days—the nestlings’ calls grew louder temporarily as well. Their frequency, however, became higher and remained so, even when the researchers returned to the nests after they’d discontinued the noise. “There’s two ways to look at this,” says Leonard. “Perhaps that change in call is actually an adaptation to a noisier environment, so maybe it’s a good thing. But the other way to see it is that in the end, they don’t sound like tree swallows any longer.” Leonard wonders what effect this might have on mating success, which depends on attracting mates vocally.

This raises a troubling question: If birds nest in areas near human activity—ever expanding and bringing with it an increasingly noisy world—what are the consequences? Will whole populations of species such as tree swallows produce offspring with altered voices? What happens if we crash the party?

A professor of English at the University of Central Florida, Don Stap wrote about the behavior of flocking shorebirds in the February/March issue.