News of the Wild: Penguins, Humpbacks and Tobacco Hornworm Caterpillars

From the December/January 2011 issue 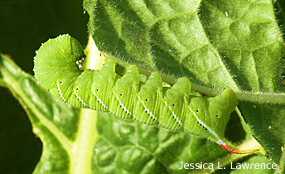 Last Supper for a Caterpillar

A new study in the Great Basin Desert of southwestern Utah has found that tobacco hornworm caterpillars (left) feeding on coyote tobacco, a native plant found from British Columbia to Texas, can be the cause of their own doom. When damaged, all plants give off green leaf volatiles (GLVs), the source of the fragrance of new-mown grass. However, when a tobacco hornworm caterpillar bites into coyote tobacco, its saliva mixes with the GLVs to produce a chemical compound that attracts big-eyed bugs, tiny insects that feed on the relatively huge caterpillars. “The bugs inject digestive enzymes and likely also a cocktail of other compounds that allow them to immobilize and feed on much larger organisms,” says Ian Baldwin, a molecular ecologist at Germany’s Max Planck Institute for Chemical Ecology. Although he doesn’t know why a species would evolve to attract its own enemies, Baldwin said the study may help researchers develop new forms of crop protection.

Biologists with the Mingan Island Cetacean Study in St. Lambert, Québec, have discovered that humpback whales form long-term pairs during the summer feeding season in the Gulf of St. Lawrence, the first such report of pair bonds in baleen whales. Male-female pairs sometimes form when the animals return from Caribbean breeding waters but generally last no more than 65 days. Female-female pairs last on average 3.5 years and can last up to 6 years. Paired females usually produce more young than do solitary females, so “it must be beneficial to choose the same individual to stay with each year,” says Christian Ramp, coauthor of a paper on whale bonding that appeared recently in the journal Behavioral Ecology and Sociobiology. Whales that form pairs usually are about the same age, he says, so they may have developed the same feeding behaviors and preferences when young and may help one another obtain food. They increase their feeding efficiency, says Richard Sears, research director for the group. 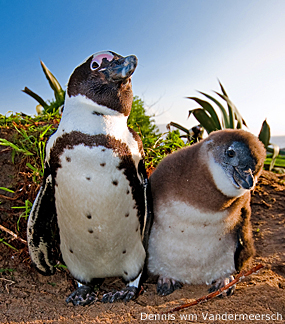 More than 180 penguin biologists, gathered for a conference at Boston’s New England Aquarium, reported in September that declining population numbers continue to plague 10 of the world’s 18 penguin species (African penguins, left); some face extinction within this century. Causes include global warming, overfishing and oil pollution. Of the 18 species, 13 are endangered or threatened.
RELATED RESOURCE: A key biological question from the gulf oil disaster is how it will affect oiled wildlife in the long run. Data that scientists have gathered from penguins off South Africa may help to forecast the future for gulf birds. See "Lessons from Another Oil Spill."