Going for the Gold

Color matters in the world of the American goldfinch, where females select their potential mates based on the brightness of their plumage 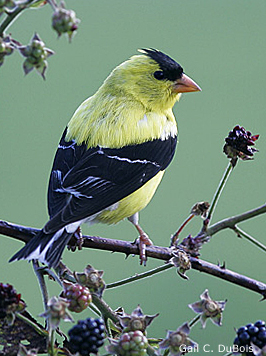 IN AN ARTICLE not long ago, National Wildlife asked readers to name which North American bird they would most like to see. In the letters and emails that followed, the number one response, by far, was the American goldfinch. It’s easy to understand why. According to data compiled by the Cornell Lab of Ornithology’s Project FeederWatch, the goldfinch is one of the most common backyard species in almost every region of the country. It also is one of the most colorful. During the warmer months, the lemon-yellow creature can instantly brighten up a bird feeder. Even in winter, when its plumage dulls to muted shades of brown and ocher, the songbird is a welcome sight.

The most widespread of the three North American goldfinch species, Spinus tristis also has caught the eye of scientists, who have studied everything from how the species can survive frigid winters to how it reacts to pesticides and habitat disturbance. Like backyard birders, some researchers have focused primarily on the bird’s striking plumage, and they have discovered there is much more to it than meets the eye.

For the past nine years, Keith Tarvin and his colleagues at Oberlin College in Ohio and Trinity University in Texas have been examining the complex interplay between color, status and sex in the lives of American goldfinches. A professor of biology at Oberlin, Tarvin spends his summers in fields and forest edges where these birds nest. When he begins his research in late June, male goldfinches are showing off their colors in a fluttering display called a butterfly flight. “The males make circles high in the air,” says Tarvin. “Usually one bird begins and it is joined by a couple of other males.” The exact purpose of this sky dance is unknown, but the scientist suspects it is part of courtship.

Male goldfinches have their work cut out for them when it comes to wooing a female. Banding studies show almost equal numbers of the sexes fledge from nests, but males tend to live longer. As a result, the breeding population of goldfinches has many more males, and females can afford to be choosy when selecting a mate. Not only do they go for color, but the brighter the better.

“Color matters,” says Tarvin, who explains the vivid hues of a goldfinch’s breeding plumage come from carotenoid pigments, the same group of chemicals that make carrots orange. The birds acquire this substance from their diet, so when females pick the brightest males to mate with, they are getting not only the best foragers but ultimately the best providers for their offspring.

Color may also indicate which birds are the healthiest. While he was a graduate student, Kevin McGraw, now a professor of evolutionary and systems biology at Arizona State University, examined the potential connection between bright feathers and good health in this species. During winter, he initiated a study of 60 temporarily captured male goldfinches. One group of the birds had a stomach parasite that weakened them; the other group did not have the parasite. When all of the goldfinches later grew their breeding plumage, the sick individuals were a much duller yellow.

Under any circumstances, molting into these summer colors is taxing and time-consuming for goldfinches. It may be one reason why this species breeds late in the season, usually not beginning in earnest until mid-July. One benefit of their slow start: Cowbirds, which parasitize other species’ nests, usually have finished laying their eggs by the end of June.

During breeding season, goldfinches seldom defend a territory and may even nest in loose colonies. The female builds her compact nest in a shrub or small tree, usually sheltered under a canopy of leaves. She lays three to six bluish white eggs and incubates them by herself, while her mate brings food to the nest. On the surface, it appears to be a peaceful scene of domestic bliss. But Tarvin and his colleagues have discovered that all of the youngsters in a nest are not necessarily the offspring of the female’s mate.

“Some of the young are sired by the male that raises them, and some by the guy next door or even the one down the road,” says Tarvin. “In our study area, we found 30 percent of the nests have young with different fathers.” And when the nestlings are about two weeks old, the female sometimes abandons them, leaving her mate to raise the youngsters alone while she begins a second brood with another male, presumably a colorful one.

Once the breeding season winds down, goldfinches begin to lose their brilliance and some people mistake them for sparrows. Most of the birds migrate to more southern climes and spend the winter jostling at feeders or foraging in overgrown fields and abandoned pastures. But when the days start to lengthen in March and April, bright flecks of yellow begin appearing on their plumage, and they morph once again into the bright birds of summer.

Just about anyone who feeds birds in a yard during winter discovers that goldfinches seldom come by ones and twos but instead often by the dozens. During summer, the birds visit backyards as well, although usually in smaller numbers. Niger (also called thistle) seed is their favorite, but the birds also devour black oil sunflower seeds. Goldfinches are not particularly picky about the type of feeder they will eat from. Gardeners also can lure them by growing native sunflowers, thistles, goldenrod, coreopsis, elm and alder. These plants are important sources of food, and female goldfinches use thistledown to line their nests.

Garden for Wildlife: NWF’s Certified Wildlife Habitat Program
"How to Grow Some Sunshine in Your Yard and Feed the Birds in the Process"
"Autumn Beauties for the Garden"
Birds and Birding Archives
Wildlife Gardening Archives