I WRITE THIS FROM VENICE, LOUISIANA, a few days after the explosion at British Petroleum's (BP) Deepwater Horizon oil rig set off a massive oil spill in the Gulf. Looking at the scale of the ecological disaster, I am frustrated, saddened and angry. BP has been long on promises and short on responses. Though two decades have passed since the Exxon Valdez spill occurred in Alaska, the oil industry and the various governmental enforcement agencies don't seem to have learned much.

With a huge volume of oil flowing in the Gulf of Mexico unabated, we clearly have an epic catastrophe unfolding. The greatest coastal wetland system in America is at the height of spring wildlife nesting season. It now faces what may be the largest oil spill in the nation’s history. It is hard to imagine a more dire situation.

BP and the other oil giants have at various times testified before congressional committees that deep, offshore oil could be developed without harming the environment. But the reality I am experiencing here on the ground in Louisiana is revealing their rhetoric as little more than spin. 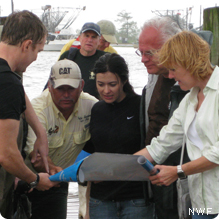 As of this writing, there are no reliable predictions when the flow of crude will be stopped or where the oil slick is headed next. What will happen to this oil? Some of the lighter constituents will volatize into the air where, in combination with other pollutants, it will increase haze and ground-level ozone. When my colleagues and I flew through that haze over the oil slick, the air burned our eyes and throats. And scientists are warning that pollutants could linger for generations in the Gulf Coast's soil and water.

Last summer, on the 20th anniversary of the Exxon spill, I traveled to Cordova, Alaska, a once-peaceful fishing village that became ground zero for the 1989 disaster when the supertanker ran aground on Bligh Reef, spilling more than 11 million gallons of crude into Prince William Sound. On that trip, I met with scientists who were part of a team that took 9,000 samples from holes dug along the impacted shoreline. They found oil in half of them, and they told me that crude oil and its breakdown products will continue to enter the food chain for years to come.

Of the 31 impacted species of wildlife studied there, only a third is fully recovered. And the once-plentiful pigeon guillemots and Pacific herring remain absent from the Sound. What does the future hold for Gulf Coast wildlife?

Coastal Louisiana produces 40 percent of the nation's oysters. Oysters are filter feeders that are known to ingest and concentrate pollutants in their systems at levels 1,000 times higher than those found in ambient waters. Oil-impacted oyster beds may be off-limits for years to come, and there are long-term ramifications of low-level contamination on such species as bluefin tuna, bottlenose dolphins, sperm whales and manatees, as well as on humans who consume tainted fish and shellfish.

Unlike the formerly pristine Prince William Sound, coastal Louisiana has seen its share of environmental insults. Canals dredged by the oil industry have carved up the once-vast coastal wetland system. The canals accelerate saltwater intrusion, destroying the protective cypress forests and replacing brackish and freshwater wetlands with degraded salt marshes. Withdrawing oil and natural gas has further deflated the region, causing millions of acres of marshes to subside. Coupled with sea-level rise caused by global warming, Louisiana is losing the equivalent of about two football fields of land every hour.

For those of us who care about the viability of the ocean and of our world, this is our "Avatar moment." We must challenge those who continue to pollute and destroy our world before it passes a point of no return.

We support President Obama's freeze on new coastal drilling, because it is time to reassess America's energy priorities. This is not just about making oil platforms safer—this is about moving to an entirely new energy platform.

Oil companies have deployed 700 lobbyists in Washington and spent tens of millions of dollars on advertising to persuade us that their drilling operations are completely safe. They have successfully stalled congressional action on clean energy alternatives and persuaded politicians to put oil company profits ahead of real energy reform. Now the bill is coming due. The hidden costs of our oil dependency are no longer invisible.