A New Dilemma for Ducks

The recent boom in biofuels, meant to reduce greenhouse gases, has led to increased drainage of prairie wetlands critical for waterfowl 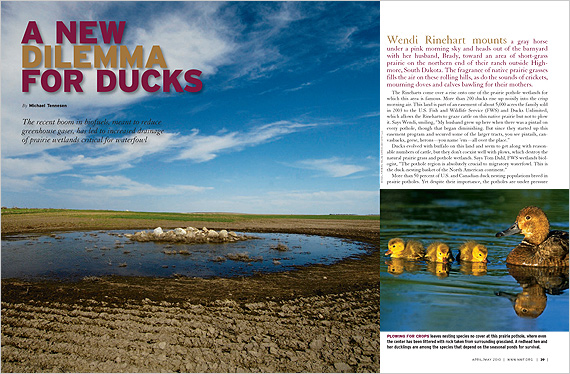 WENDI RINEHART mounts a gray horse under a pink morning sky and heads out of the barnyard with her husband, Brady, toward an area of short-grass prairie on the northern end of their ranch outside Highmore, South Dakota. The fragrance of native prairie grasses fills the air on these rolling hills, as do the sounds of crickets, mourning doves and calves bawling for their mothers.

The Rineharts come over a rise onto one of the prairie pothole wetlands for which this area is famous. More than 200 ducks rise up noisily into the crisp morning air. This land is part of an easement of about 5,000 acres the family sold in 2003 to the U.S. Fish and Wildlife Service (FWS) and Ducks Unlimited, which allows the Rineharts to graze cattle on this native prairie but not to plow it. Says Wendi, smiling, “My husband grew up here when there was a pintail on every pothole, though that began diminishing. But since they started up this easement program and secured some of the larger tracts, you see pintails, canvasbacks, geese, herons—you name ’em—all over the place.”

Ducks evolved with buffalo on this land and seem to get along with reasonable numbers of cattle, but they don’t coexist well with plows, which destroy the natural prairie grass and pothole wetlands. Says Tom Dahl, FWS wetlands biologist, “The pothole region is absolutely crucial to migratory waterfowl. This is the duck-nesting basket of the North American continent.”

More than 50 percent of U.S. and Canadian duck nesting populations breed in prairie potholes. Yet despite their importance, the potholes are under pressure from farmers who are draining them and then plowing the drained land for agriculture and biofuel production. The potholes are also the victims of recent Supreme Court decisions that have redefined protections previously afforded to potholes by the Clean Water Act. New research suggests that potholes help remove some of the atmospheric carbon dioxide that causes global warming. And climate change threatens up to 91 percent of these important wetlands, though carbon-trading programs being considered by Congress could mitigate some of the harm and provide important funding for wetland restoration.

Found in south-central Canada and the north-central United States, particularly in the Dakotas, Minnesota and Wisconsin, more than 3 million potholes (small depressions) formed by glaciers during the last Ice Age pockmark the area. Most are seasonal, filling with snowmelt and rain in spring, but some are permanent. “Pothole protection has been a high priority for the National Wildlife Federation since its founding,” says Julie Sibbing, NWF director for global warming, agriculture and wildlife. Still, more than half of all prairie potholes have been drained for agricultural use “and that has led to a steady decline in duck populations as well,” says Jim Murphy, NWF attorney. 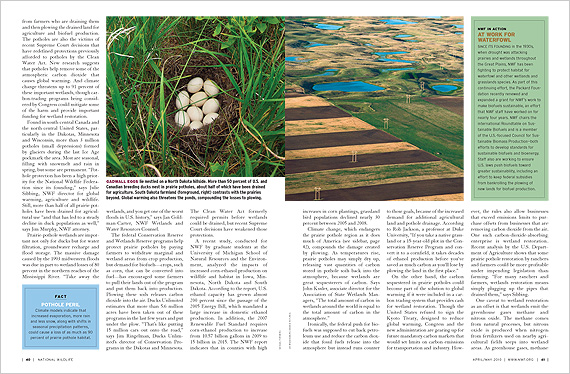 Prairie-pothole wetlands are important not only for ducks but for water filtration, groundwater recharge and flood storage. The massive damage caused by the 1993 midwestern floods was due in part to wetland losses of 80 percent in the northern reaches of the Mississippi River. “Take away the wetlands, and you get one of the worst floods in U.S. history,” says Jan Goldman-Carter, NWF Wetlands and Water Resources Counsel.

The federal Conservation Reserve and Wetlands Reserve programs help protect prairie potholes by paying farmers to withdraw marginal and wetland areas from crop production, but demand for biofuels—crops, such as corn, that can be converted into fuel—has encouraged some farmers to pull their lands out of the program and put them back into production. Plowing these soils releases carbon dioxide into the air. Ducks Unlimited estimates that more than 5.6 million acres have been taken out of these programs in the last few years and put under the plow. “That’s like putting 15 million cars out onto the road,” says Jim Ringelman, Ducks Unlimited’s director of Conservation Programs in the Dakotas and Minnesota. The Clean Water Act formerly required permits before wetlands could be drained, but recent Supreme Court decisions have weakened those protections.

A recent study, conducted for NWF by graduate students at the University of Michigan School of Natural Resources and the Environment, analyzed the impacts of increased corn-ethanol production on wildlife and habitat in Iowa, Minnesota, North Dakota and South Dakota. According to the report, U.S. ethanol capacity has grown almost 200 percent since the passage of the 2005 Energy Bill, which mandated a large increase in domestic ethanol production. In addition, the 2007 Renewable Fuel Standard requires corn-ethanol production to increase from 10.57 billion gallons in 2009 to 15 billion in 2015. The NWF report indicates that in counties with high increases in corn plantings, grassland bird populations declined nearly 30 percent between 2005 and 2008.

Climate change, which endangers the prairie pothole region as it does much of America (see sidebar, below), compounds the damage created by plowing. As temperatures rise, prairie potholes may simply dry up, releasing vast quantities of carbon stored in pothole soils back into the atmosphere, because wetlands are great sequesterers of carbon. Says John Kusler, associate director for the Association of State Wetlands Managers, “The total amount of carbon in wetlands around the world is equal to the total amount of carbon in the atmosphere.”

Ironically, the federal push for biofuels was supposed to cut back petroleum use and reduce the carbon dioxide that fossil fuels release into the atmosphere but instead runs counter to those goals, because of the increased demand for additional agricultural land and pothole drainage. According to Rob Jackson, a professor at Duke University, “If you take a native grassland or a 15-year-old plot in the Conservation Reserve Program and convert it to a cornfield, it takes decades of ethanol production before you’ve saved as much carbon as you’ll lose by plowing the land in the first place.” 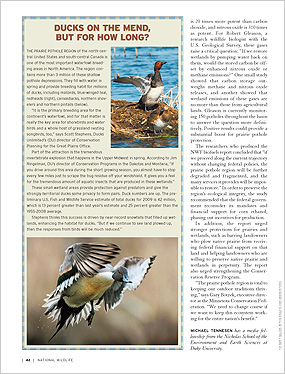 On the other hand, the carbon sequestered in prairie potholes could become part of the solution to global warming if it were included in a carbon trading system that provides cash for wetland restoration. Though the United States refused to sign the Kyoto Treaty, designed to reduce global warming, Congress and the new administration are gearing up for future mandatory carbon markets that would set limits on carbon emissions for transportation and industry. However, the rules also allow businesses that exceed emissions limits to purchase offsets from businesses that are removing carbon dioxide from the air. One such carbon-dioxide-absorbing enterprise is wetland restoration. Recent analysis by the U.S. Department of Agriculture shows that some prairie pothole restoration by ranchers and farmers could be more profitable under impending legislation than farming. “For many ranchers and farmers, wetlands restoration means simply plugging up the pipes that drained them,” says Sibbing.

One caveat to wetland restoration as an offset is that wetlands emit the greenhouse gases methane and nitrous oxide. The methane comes from natural processes, but nitrous oxide is produced when nitrogen from fertilizers used on nearby agricultural fields seeps into wetland areas. As greenhouse gases, methane is 20 times more potent than carbon dioxide, and nitrous oxide is 310 times as potent. For Robert Gleason, a research wildlife biologist with the U.S. Geological Survey, these gases raise a critical question: “If we restore wetlands by pumping water back on them, would the stored carbon be offset by enhanced nitrous oxide or methane emissions?” One small study showed that carbon storage outweighs methane and nitrous oxide releases, and another showed that wetland emissions of these gases are no more than those from agricultural lands. Gleason is currently monitoring 150 potholes throughout the basin to answer the question more definitively. Positive results could provide a substantial boost for prairie pothole protection.

The researchers who produced the NWF biofuels report concluded that “if we proceed along the current trajectory without changing federal policies, the prairie pothole region will be further degraded and fragmented, and the many services it provides will be impossible to restore.” In order to preserve the region’s ecological integrity, the study recommended that the federal government reconsider its mandates and financial support for corn ethanol, phasing out incentives for production.

“The prairie pothole region is vital to keeping our outdoor traditions thriving,” says Gary Botzek, executive director at the Minnesota Conservation Federation. “We need to change course if we want to keep this ecosystem working for the entire nation’s benefit.”

Michael Tennesen has a media fellowship from the Nicholas School of the Environment and Earth Sciences at Duke University.

Ducks on the Mend, But for How Long?

The Prairie Pothole Region of the north-central United States and south-central Canada is one of the most important waterfowl breeding areas in North America. The region contains more than 3 million of these shallow pothole depressions. They fill with water in spring and provide breeding habit for millions of ducks, including mallards, blue-winged teal, redheads, canvasbacks, northern shovelers and northern pintails.

“It is the primary breeding area for the continent’s waterfowl, and for that matter is really the key area for shorebirds and water birds and a whole host of grassland nesting songbirds, too,” says Scott Stephens, Ducks Unlimited’s (DU) director of Conservation Planning for the Great Plains Office.

Part of the attraction is the tremendous invertebrate explosion that happens in the Upper Midwest in spring. According to Jim Ringelman, DU’s director of Conservation Programs in the Dakotas and Montana, “If you drive around this area during the short growing season, you almost have to stop every few miles just to scrape the bug residue off your windshield. It gives you a feel for the tremendous amount of aquatic insects that are produced in these wetlands.”

These small wetland areas provide protection against predators and give the strongly territorial ducks some privacy to form pairs. Duck numbers are up. The preliminary U.S. Fish and Wildlife Service estimate of total ducks for 2009 is 42 million, which is 13 percent greater than last year’s estimate and 25 percent greater than the 1955-2008 average.

Stephens thinks this success is driven by near-record snowfalls that filled up wetlands, enhancing the habitat for ducks. “But if we continue to see land plowed up, then the responses from birds will be much reduced.”

Climate models indicate that increased evaporation, more rain and less snow, along with shifts in seasonal precipitation patterns, could cause a loss of as much as 90 percent of prairie pothole habitat.

NWF in Action: At Work for Waterfowl

Since its founding in the 1930s, when drought was attacking prairies and wetlands throughout the Great Plains, NWF has been fighting to protect habitat for waterfowl and other wetlands and grasslands species. As part of this continuing effort, the Packard Foundation recently renewed and expanded a grant for NWF’s work to make biofuels sustainable, an effort that NWF staff have worked on for nearly four years. NWF chairs the international Roundtable on Sustainable Biofuels and is a member of the U.S.-focused Council for Sustainable Biomass Production—both efforts to develop standards for sustainable biofuels and bioenergy. Staff also are working to ensure U.S. laws push biofuels toward greater sustainability, including an effort to keep federal subsidies from bankrolling the plowing of new lands for biofuel production.