As millions of birds head for the biggest spill in U.S. history, federal and nonprofit groups work with farmers to create safe alternative habitats 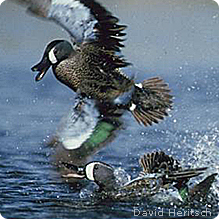 The BP oil spill has contaminated huge swaths of some of the continent’s most critical bird habitat. Yet scientists say that, given the scale of the disaster, the toll of dead and injured birds has been lower than they initially expected. Compared to previous spills like the Exxon Valdez, which was much smaller, “our numbers have not been very dramatic,” says U.S. Fish and Wildlife Service (FWS) biologist Gary Edwards, deputy regional director of the service’s Alaska region recently deployed in Louisiana.

One reason may be that most birds that die do so in remote wetlands or far out at sea and are never located. In addition, a combination of favorable tides and winds, along with the southerly outflow of the Mississippi River, kept the bulk of the oil offshore during the early stages of the spill. This gave most spring migrants a chance to get past the danger zone and arrive safely at summer breeding grounds in the northern United States and Canada.

But that soon may change.

Millions of shorebirds, waterfowl and other birds are flying into the Gulf region as fall migration gets under way. Some, such as shorebirds and songbirds, will be making short stops before setting off on long flights across the Gulf of Mexico to Central and South America. Others, including many ducks and geese, will spend the entire winter along the coast.

Having traveled hundreds, even thousands, of miles, all of these birds will be in desperate need of food and safe places to rest. But instead, they are “heading right for the biggest oil spill in this nation’s history,” says Paul Schmidt, FWS assistant director for migratory birds. “For more than a century,” he adds, “we have worked to protect and restore migratory bird populations in North America. This conservation legacy is now jeopardized by the oil spill.”

According to Schmidt, the U.S. Gulf Coast provides food and shelter to millions of birds of hundreds of species. “We estimate that literally hundreds of millions of birds use this area some time during their life cycle,” he says. Straddling the Mississippi Flyway, one of the most important migratory bird corridors on Earth, the region hosts during their twice yearly migrations a major portion of all birds that breed in North America. 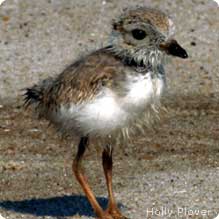 During migration, vast numbers of shorebirds stop in the Gulf region to replenish critical fat reserves by feeding on beaches and in wetlands, many now polluted by oil. They include sandpipers, dunlins, plovers, dowitchers, greater and lesser yellowlegs and red knots.

FWS has listed one plover, the piping plover, as an endangered species throughout much of its range. Piping plovers already have been spotted in the spill zone. Their numbers are expected to peak in August and September, and some will stay the entire winter.

Tom Moorman, director of conservation planning for the southern region of Ducks Unlimited, calls the Gulf Coast “the most important wintering area for waterfowl in North America.”

Up to 13.7 million ducks and 1.5 million geese spend part or all of the winter in the region, dabbling for food near the surface of the water or diving beneath it. These species include red-heads, blue-winged teal, gadwalls, northern pintails and snow geese.

One duck of particular concern is the lesser scaup. “These birds have been declining for years, and no one knows exactly why,” says NWF senior scientist Doug Inkley. 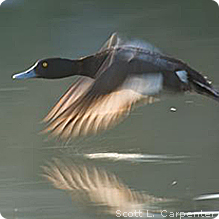 According to Moorman, more than a third of the continent’s population of lesser scaup winter in the Gulf region—up to 1.4 million birds in some years. Scheduled to arrive in November, when they’ll begin feeding in shallow offshore waters, “tens of thousands of scaup could die” if they dive into oil-contaminated water.

If oil kills their prey—dwarf surf clams—the birds are likely to move to areas where they can find food. One of the worst scenarios, says Moorman, would be if the ducks ate filter-feeding clams that had taken in oil. The hydrocarbons contained in oil could cause major physiological damage or impair future reproduction.

About half the common loons that breed in the Midwestern United States winter along the Gulf Coast. They feed only on the water. Most at risk are young loons that will stay in the Gulf two to four years before flying back north.

Other birds that winter in or pass through the Gulf region during fall include grebes, cormorants, several species of tern, white pelicans and many songbird species. Year-round residents increasingly at risk include many herons and egrets.

Inkley and Moorman point out that the BP spill is just the latest major insult to the Gulf’s critical bird habitats. “The region’s wetlands were created and are maintained by sediments carried downstream and deposited by the Mississippi River,” says Inkley. Yet through actions such as building levees and carving out canals, “we’ve nearly stopped those natural processes and have done very little to rebuild the marshes.” 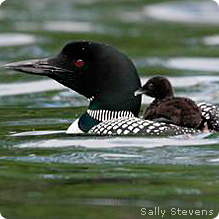 Over the past century, coastal Louisiana has lost some 1.2 million acres of wetlands, says Moorman—nearly half of what it originally had. He fears the oil spill may accelerate this process.

A Helping Hand for Migrants

To try and minimize harm to migrating and overwintering birds, federal agencies are teaming up with conservation groups as well as farmers, ranchers and other large landowners to improve, restore and create new wetland habitat and provide sources of food away from oil-contaminated zones.

At a July 2 press conference, Schmidt described several soon-be-be-launched efforts by FWS to “minimize the entrance of oil into managed habitats along the Gulf and enhance the availability of migratory bird food resources outside oil-impacted areas”—primarily by flooding farm fields. Service workers also may try and haze birds out of contaminated areas using firecrackers, Mylar tape and other measures. In addition, said Schmidt, the presence of hundreds of people moving around oiled areas as they try to clean them “will certainly serve as a distraction or detractor for birds.” 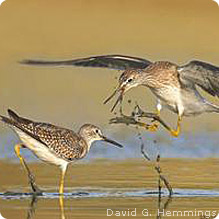 On a smaller scale, Ducks Unlimited has received a grant from the National Fish and Wildlife Foundation to work with farmers to flood rice fields and other agricultural lands in coastal rice-growing regions of Louisiana and Texas. “We’re getting a good response so far,” says Moorman. “Folks really want to help. We’ll continue to ramp up the program as the migration season progresses.”
Being “Realistic”

But these efforts have limits. “We think we can have localized effects that will prevent some oiling and provide some benefits to migratory birds,” Schmidt said at the press conference. But “we’re also realistic,” he added. “We won’t be able to dramatically affect migrations in any major way, shape or form. The birds are still expected to do what they do in a natural cycle.”