In the Pacific: Mysterious Seabird Declines

Why are puffins, auklets and other seabirds declining off the U.S. West Coast? 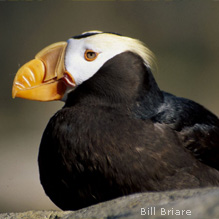 Off the U.S. West Coast, several seabird species are in trouble. The birds, all members of the auk family, spend their lives at sea, coming ashore only to raise their young. More at home in the ocean than on land or in the air, they use their wings to “fly” underwater to catch prey, often diving as deep as 100 to 300 feet.

Over the past century, auk populations have been depleted by introduced predators on nesting islands, oil spills, pollution and fishing nets that entangle and drown them. But today there are new threats. The seabirds’ food web appears to be unraveling, and scientists suspect global warming is the cause.

Most tufted puffins nest in North America from the Aleutians to California. The birds’ northernmost colonies are thriving but their southern colonies are declining dramatically. At Oregon’s Three Arches Rocks, puffin numbers have plummeted, and only a fraction remain. In Washington, nearly a third of all colonies have disappeared.

Scientists suspect that lack of food is causing both species’ troubles. Adult Cassin’s auklets leave their young alone during the day and fly back each night with krill to feed them. But krill have been in short supply the past few years when auklets are trying to raise their chicks. Puffins feed their chicks fish, which also have declined during the seabird’s breeding season.

Why is prey disappearing?

One explanation may be that the ocean is heating up. From 1937 to 2002, the sea surface temperature in the vicinity of British Columbia’s Triangle Island has fluctuated from year to year but increased overall by nearly 1 degree C. Scientists have monitored breeding seabirds on the island since 1975, including a colony of 50,000 tufted puffins. They’ve found the puffins’ fledgling success is virtually zero when the sea surface exceeds 9.9 degrees C. When the water is that warm, biologists believe prey fish move elsewhere, forcing adult puffins to follow and leave their eggs and chicks behind.

“Breeding birds are tied to specific places,” explains Julie Thayer of Petaluma, California-based PRBE Conservation Science. The young of puffins and auklets must stay in or near their burrows until they are able to fly. As a result, parents are tethered to their nesting island for as long as 3 months, usually unable to forage more than about 30 miles away. The timing of prey is very important to these birds, adds Thayer.

Changing climate seems to be throwing that timing out of kilter. In particular, changes to coastal upwelling—the critical movement of nutrient-rich water from the depths of the ocean to its surface—may be having disastrous consequences. Upwelling delivers food to phytoplankton, the single-celled plants that are the foundation of marine food chains. Because phytoplankton can live only in the top 100 feet or so of the ocean, where light permeates, their existence depends on upwelling.

Today it often takes longer for upwelling to occur, and sometimes it doesn’t happen at all. When mixing does take place, the waters usually come up from a shallower level, which means they are poorer in nutrients. This sets off a domino effect in the food chain: disappearing phytoplankton, a drop in krill and other animal plankton, a scarcity of prey—and starving seabirds.

From California to British Columbia, rhinocerous auklets have had trouble finding enough food for their youngsters in recent years. In times past, when the birds laid their eggs, the waters surrounding their nesting islands were roiling with rockfish, sand lance, sablefish and squid. Today the fish are often AWOL.

Horned puffins breed primarily in Alaska, where they have begun nesting farther to the north as the summer pack ice shrinks. The birds winter in the Pacific, usually far from land, and are rarely found washed up on the coast. But that has changed over the past few years, mystifying researchers who wonder if more birds are dying or if shifting conditions are forcing them to forage closer to shore.

Canaries in a coal mine?

“We see signals in birds,” says seabird biologist Bill Sydeman. “They’re the best indicators of what’s going on.” As president of the Petaluma, California-based Farallon Institute for Advanced Ecosystem Research, he and his colleagues have been following the islands’ seabirds for the past 35 years. “We know there are changes to the ecosystem,” says Sydeman.