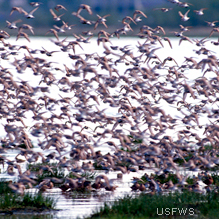 Each winter, and during spring and fall migration, North America’s shorebirds congregate in huge numbers—from thousands to hundreds of thousands, even millions. You’ll find them mainly feeding in shallow wetlands. Indeed, 70 percent of the world’s 217 species of shorebird—49 of which occur regularly in North America—feed in water of 4 inches or less.

How do so many shorebird species gather together without competing for the same resources? Much the same way people do at the grocery store, says University of Connecticut biologist Margaret Rubega, who has spent more than 20 years studying how birds feed. “When you are in the produce aisle there are a lot of other people there, but . . . you might leave with brussels sprouts and spinach and somebody else is going to go out the door with avocados and limes.”

In much the same way, different shorebird species use different “shelves” of food in the same area as well as diverse techniques to capture prey. Some examples:

The least sandpiper has a short, pointed bill and most often remains on the mudflats pecking at small invertebrates it locates by sight.

Also on the mudflats, the semipalmated plover runs short distances and stops suddenly, freezing with one foot ahead of the other and raised at an angle. The toes, trembling slightly, just touch the surface—a motion that encourages tiny invertebrates to scatter, revealing themselves in the process.

In shallow water, dunlins probe the muddy substrate and capture small clams, worms, insect larvae and amphipods by detecting their movement with special receptors in their bills.

Farther out, short-billed dowitchers, whose bill length is more than half again as long as the dunlin’s, wade in deeper water and probe more deeply where they can get at prey beyond the reach of dunlins.

Black-necked stilts, the slender, long-legged ballerinas of the shorebird clan, have bills roughly the same length as short-billed dowitchers, but rather than probe the mud at the bottom they walk slowly and pick at prey on the surface of the water.

The American avocet, roughly similar in size and shape to the stilt, sweeps its upturned bill side to side just below the water’s surface, filtering out small invertebrates.

In recent years, scientists studying shorebird feeding have uncovered some remarkable adaptations that are much less obvious:

Rubega and her colleagues discovered that phalaropes use the surface tension that holds a drop of water together to retrieve water drops that contain tiny food items, trapped like figurines in a snow globe. The bird works the droplets up into its bill and squeezes them, releasing the liquid and leaving only the food. This behavior has since been found in other sandpiper species.

Dutch biologist Theunis Piersma found that red knots and some other shorebirds can detect “pressure gradients” caused by prey buried in the mud. Their secret: sensitive pressure sensors discovered on their bills.

Using high-speed video recording, Tomohiro Kuwae of Japan and colleagues found that western sandpipers do much of their feeding in the biofilm—a dense but paper-thin layer that lies on the surface of the mud. Microorganisms are bound up in this mucouslike biofilm, which holds them in place so they are not washed away by the tides.

Flocking together to feed helps shorebirds avoid predators like hawks and falcons. There is safety in numbers as many birds watch the sky from countless vantage points. Even at rest, with their beaks tucked under their scapular feathers, their heads half-buried, sandpipers often keep open the exposed eye that is pointed skyward.

If a predator arrives, a loosely-knit feeding flock will quickly assemble into the unified flight flocks that we humans find breathtaking—and attacking raptors find confounding. It’s easier to explain why shorebirds fly in tight formations than how they accomplish it. “People have been wondering about this for millennia,” says biologist Frank Heppner of the University of Rhode Island.

A few clues have emerged in recent years, but “we still don’t know how birds fly in these formations,” adds Heppner, “When we know the answer, I’ll still go out and just watch them. Someone once said that understanding that a rainbow is caused by the refraction of light through raindrops does not make you appreciate the rainbow any less.”

Adapted from “ Birds of a Feather ” by Don Stap, National Wildlife , February/March 2010.