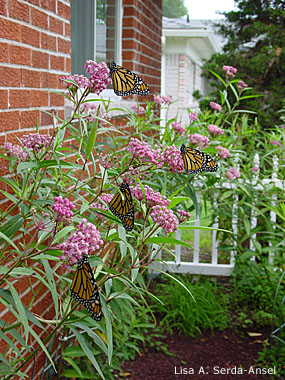 I WAS INTRIGUED when I first heard about my local natural history museum’s intention to hand out packets of seeds to schoolchildren so that they might plant their own backyards with the vegetation that attracts butterflies—thus helping bring back butterfly migration routes. There was something almost enchanted about this plan—the idea of entering intimate participation in the life currents of the world, through the modest doorway of a suburban backyard or window box in an inner city. These currents swirl around and over and through our lives. And yet, most of us are far more aware of the signals of our mobile phone and computer networks.

What if we were equally aware of the timing and routes of, say, monarch butterflies (left), those that breed in North America and each year migrate over a thousand miles to spend the winter in a small patch of pine forest in Mexico? Or the Neotropical birds—the wood thrushes, cerulean warblers, scarlet tanagers, indigo buntings, and Baltimore orioles on the wing from Kentucky to the Andes. What if we were to take part in these migrations by nurturing a planting a few feet from the barbeque grill? That grill, that yard, would then be connected to something large, magnificent, and not entirely explicable.

Gardeners Can Make a Difference for Wildlife

Habitat fragmentation and degradation are disrupting those routes at unprecedented rates, but Doug Tallamy believes that we can do something about that, and we can at least help salvage—or build—the biodiversity of our continent, from our backyards. Tallamy is professor and chair of the Department of Entomology and Wildlife Ecology at the University of Delaware. He is also the author of Bringing Nature Home: How You Can Sustain Wildlife with Native Plants.

A modest, self-effacing man, he offers this radical idea: The site of North America’s resurgent biodiversity is in your backyard, and your family has power: “My central message is that unless we restore native plants to our suburban ecosystems, the future of biodiversity in the United States is dim.” He tempers this gloomy prediction with two points of optimism: “First and foremost, it is not yet too late to save most of the plants and animals that sustain the ecosystems on which we ourselves depend. Second, restoring native plants to most human-dominated landscapes is relatively easy to do.”

For the first time in history, he argues, “Gardening has taken on a role that transcends the needs of the gardener. Like it or not, gardeners have become important layers in the management of our nation’s wildlife. It is now in the power of individual gardeners to do something that we all dream of doing: to ‘make a difference.’ In this case, the ‘difference’ will be to the future of biodiversity, to the native plants and animals of North America and the ecosystems that sustain them.”

Analyzing data from all over the world, one researcher found a one-to-one relationship between species loss and loss of native habitat. One example: In Delaware, 40 percent of all native plant species are threatened or extinct; 41 percent of native birds that depend on native forest cover are rare or gone. Save a native plant, save a native bird.

The Importance of Native Plants

Usually when gardeners recommend the use of native plant species, the goal seems to be to conserve water, to save native plants, or to replace the ordinary with the novel. Tallamy suggests a new motivation: to save insects—and the wildlife that depend upon these insects as a food source.

He argues that this is crucial, “since the terrestrial ecosystems on which we humans all depend for our own continued existence would cease to function without our six-legged friends.” (E.O. Wilson calls insects “the little things that run the world.”) “Unless we modify the places where we live, work, and play to meet not only our own needs but the needs of other species as well, nearly all species of wildlife native to the United States will disappear forever,” says Tallamy.

Such predictions of mass extinction, he adds, are typically based on the assumption that the vast majority of plants and animals cannot coexist with humans in the same place at the same time. “Nonsense!” he says. “Evidence suggests that the opposite is true: Most species could live quite nicely with humans if their most basic ecological needs were met. Yes, some species such as the cougar, gray wolf, and ivory-billed woodpecker are just too reclusive to become our fellows. But countless others could live sustainably with us if we would just design our living spaces to accommodate them.” Tallamy and his colleagues have begun the large, controlled and overdue research projects that are needed to nail down his case and lead to broad-scale action. But the preliminary data is beginning to accumulate: “So far, the results provide exciting support for gardeners who have already switched to natives or who are enthusiastic about doing so.”

If Tallamy’s hypothesis turns out to be right, in his words: “These gardeners can and will ‘change the world’ by changing what food is available for their local wildlife.”

Richard Louv is chairman of the Children and Nature Network and the author of Last Child in the Woods: Saving Our Children from Nature-Deficit Disorder. This text originally appeared in his Field Notes from the Future blog.