At several tribal schools, educators are using NWF-certified gardens to connect kids with both nature and their Native American heritage 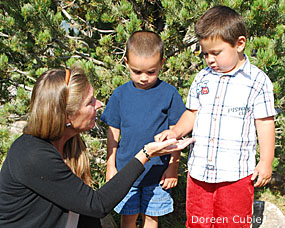 AS A DOZEN STUDENTS cluster around their teacher at the foot of a pinyon pine, two deer grazing nearby also seem to be edging closer to the group. The children, all enrolled at the Southern Ute Indian Academy in Ignacio, Colorado, are gathered in the school’s NWF-certified schoolyard habitat as part of their daily learning experiences.

The deer are browsing in an adjacent large riparian area, where the students also spend time studying the plants and animals that are found on the reservation. “The children really seem to enjoy learning when they’re out here,” says Linda Daniels, the school’s health coordinator (left, with students).

When NWF expanded its Certified Wildlife Habitat™ program for homeowners in 1996 to include schoolyards, the idea was to give teachers and students an opportunity to develop havens for wildlife on their school grounds. The program also was designed to create outdoor classrooms where a wide range of subjects can be taught.

Nine years later, the Southern Ute academy—a private facility for children from kindergarten through sixth grade—became the first tribal school in the country to receive NWF certification for its on-campus habitat. Since then, nine other tribal elementary and high schools in New Mexico, Arizona and South Dakota have joined the nearly 3,500 public and private schools throughout the United States that now have official habitats on their grounds. Several other tribal schools currently are in the process of earning certification.

“Teaching Native American students about their culture is an extra component of tribal schoolyard habitats,” says Alexis Bonogofsky, a senior coordinator of NWF’s Tribal Lands Conservation Program. “It’s also a way to increase their interest in science and natural resources, and hopefully start some of the students down the road to a career in one of these fields.” Another benefit of schoolyard habitats: unplugging kids from their computers. “It gives us all kinds of reasons to get them outside,” says Bill Foxx, who teaches science at the Blackwater Community School on the Gila River Indian Reservation in Arizona. His students’ activities range from building birdhouses to caring for two “adopted” desert tortoises that were rescued by state authorities and placed at the school.

Getting children outside also was a motivating factor for Daniels, who spearheaded building the academy’s habitat on the Southern Ute Reservation. Their first project on the road to certification—a pond—was a “huge volunteer effort, with many parents and older kids helping,” says Daniels, a registered nurse and master gardener who also enlisted the help of the tribe’s wildlife resources and maintenance departments, which provided manpower and a drip irrigation system.

Today, dragonflies flit over the surface of the pond. A butterfly, bee and hummingbird garden is not far away. Native plants transplanted from other parts of the reservation include sage, snowberry, buffalo berry, currant and chokecherry. Seed feeders entice jays, nuthatches and other birds.

“We’ve integrated the wildlife habitat into much of our curriculum,” says Daniels. Besides using the garden to teach botany and biology, the staff has incorporated it into lessons on writing, art, poetry, music and mathematics. Depending on their ages, students may draw pictures of butterflies or birds, study aquatic life in the pond or write stories about nature. The youngsters also study Southern Ute culture and learn the names of plants and animals in both English and Ute.

“The habitat really helps us reconnect the students not only to nature, but also to their heritage,” says Daniels. “It’s very rewarding.”

Writer Doreen Cubie visited the Southern Ute Indian Academy to report for this article. She wrote about new discoveries regarding praying mantises in the December/January issue.

Can Schoolyard Habitats® provide educators with effective settings for teaching youngsters about topics other than nature? According to a 2008 study of fourth-grade students in Houston by the American Society of Horticultural Science, the answer is “yes.” The results of the study showed that students who participated in the NWF program had significantly increased math scores on standardized tests compared with their peers in schools that used more traditional math curriculum.

“These findings support related studies of students’ academic achievement when an interdisciplinary or integrated curriculum, particularly one with an environmental slant, was imposed,” said the researchers. The Houston Independent School District has since set an ambitious goal of creating certified habitats at each of its 202 elementary schools in the next few years. Learn more about the NWF school program.