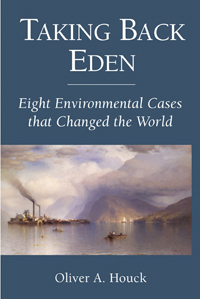 TAKING BACK EDEN:  Eight Environmental Lawsuits That Changed the World
By Oliver A. Houck

Given all the progress and setbacks we have experienced since the first Earth Day 40 years ago, we can easily overlook a major accomplishment of that initial celebration, an accomplishment that has stood the test of time. It is the ability of the American people, unheard of in 1970, to take government and industry to court to protect the quality of human life.

As important as Rachael Carson and Jacques Cousteau were in sounding the alarm for a threatened planet, the driver that took the nation from alarm to action was the brand new, made-in-America phenomenon of environmental lawsuits. Year in and year out, these actions have prevented environmental disasters from occurring and have forced government to face unpleasant facts and unwanted responsibilities. Most recently, environmental groups and the State of Massachusetts compelled an unwilling presidential administration to come to grips with climate change. We take these suits for granted. Environmental litigation is now part of our social and political landscape and a key component of our success in protecting the nation from threats such as pollution.

International Impacts
What we do not appreciate is the extent to which this same revolutionary idea has traveled abroad, producing results overseas that are even more dramatic than those experienced here at home.  In his recent book, Taking Back Eden, Tulane University law professor Oliver Houck traces the history of this revolution from its origins on the Hudson River in the 1960s to such unexpected places as post-Khrushchev Russia, the Philippines under Fernando Marcos and Chile during the reign of General Pinochet. In each case, a few brave and far-sighted souls spoke truth to power and then took government to court.

The lawsuits turned quickly into uphill battles. Winning lawsuits against the largest energy utility in the United States, the Japanese Ministry of Construction and the most powerful province in Greece seemed, at first blush, impossible. There was no monetary award to be won, only the cost of waging legal battles that rambled on for decades. There were other costs as well. One advocate in Moscow was sidelined and silenced. Another set out to save the Philippine forests, overtook a renegade logging boat by helicopter, rappelled to the deck, swore out a warrant and arrested  the ship. Two years later, his colleague in a similar campaign was assassinated on the doorstep of his home. These are the people who led the way.

A Trend of the Future
Taking Back Eden tells the stories of fishermen, campesinos, Cree Nation hunters, dreamers and lawyers with a cause. Their actions in court were remarkable enough.  More remarkably, they won. What they tell us is that the American notion of empowering citizens to sue for environmental protection, like empowering them to vote, is out of the bottle, the culture of judicial correction of environmental wrongs is growing, and there is no going back. Nor should there be.

Oliver A Houck directs the Tulane University environmental law program.  In the 1970s, as NWF’s general counsel, he launched the group's legal action program, which quickly took on issues regarding water resources, transportation and other projects in the Florida Everglades, the Upper Midwest prairie pothole region, the Platte River in Nebraska and other key wildlife habitats. The success of this unit led to creation of a similar program by the Canadian Wildlife Federation in the 1980s and resulted in a seminal lawsuit described in Houck’s book. Taking Back Eden is available at www.islandpress.org/eden

Speak up to safeguard wildlife from global warming!
Learn how NWF is inspiring Americans to protect wildlife for our children's future.
Join NWF - Become a member and receive a special welcome gift.