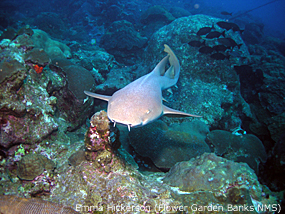 Taking Education to a New Level

For much of its 75-year history, NWF has been a leader in the field of environmental education. Now it is taking these efforts to an entirely new level. Since November 2009, the Federation has been the host organization and driving force behind Eco-Schools USA, a new member of the international Eco-Schools program. Launched 16 years ago, the program is a network of 37,000 schools in 50 countries that is seeking to reduce the environmental footprint and increase the environmental literacy of the world’s academic institutions, from kindergarten through high school. In just over a year, the U.S. effort “has helped schools—and students—across the country,” says Laura Hickey, senior director of Eco-Schools USA and NWF’s senior director for global warming education. “Research shows that kids are happier, healthier and better students when they are actively engaged in helping the environment.”

The Eco-Schools USA program differs from other green-school projects, says Hickey, because participants integrate sustainable practices across three areas: school grounds, facilities and curriculum. There is no cost to participate, but applicants must pledge to undertake a series of seven steps, which include conducting an assessment of the school’s environmental impact; developing an action plan to reduce that impact; monitoring progress of the plan; and engaging students, parents, teachers, other school staff and the broader community in the effort.

As of last fall, Eco-Schools USA had certified 344 schools in 39 states plus the District of Columbia. Nearly 140,000 students and 4,000 teachers were involved in the program. At the end of the project’s first academic year (2009-2010), NWF surveyed participants. “Survey responses show that Eco-Schools USA is effectively improving these schools’ environmental footprint,” says Kevin Coyle, NWF’s vice president for education and training. “It is also improving student behavior, morale, attitude, academic scores and interest in science.”

The program also is saving schools money. At Skyline Elementary in Portland, Oregon, for example, cafeteria workers have replaced disposable trays with reusable ones and throwaway cutlery with metal utensils donated by parents. In addition, students now sort lunch leftovers, setting aside meat and cheese to feed a neighbor’s pigs and other table scraps to feed a teacher’s chickens. Their volume of trash has decreased so much that the school has eliminated one of its dumpsters, saving the school system about $1,700 a year. A third of all U.S. Eco-Schools report similar savings—between 5 and 20 percent annually.

By drafting their own action plans, Eco-Schools participants “can chart a course that is unique to their situation,” says Hickey. The program identifies eight general “pathways” through which a school can decrease its environmental impact. So far, the majority are focusing their efforts on conserving water, reducing energy consumption, greening management practices on school grounds and reducing consumption and waste.

In addition to hosting workshops and guest-speaker presentations, NWF will be celebrating its 75 years of conservation at its upcoming annual meeting. The gathering will take place in the nation’s capital April 14–16 at the Hyatt Regency Washington on Capitol Hill. For more details, including registration information, visit www.nwf.org/annualmeeting or call 703-438-6299.

Georgia hosted its first-ever summit on children and the outdoors last fall. Oregon recently became the third state in the nation to complete an environmental literacy plan for students in grades K through 12. Helping to advance these efforts and those of other states has been important to NWF and its affiliates, part of the groups’ Be Out There™ campaign.

“Be Out There’s mission,” says NWF Senior Vice President of Education and Training Kevin Coyle, “is to return to the nation’s children what they don’t even know they’ve lost: their connection to the natural world.” NWF and its state partners will get a boost from the federal government if the Moving Outdoors in Nature Act introduced in Congress gets passed. The bill provides incentives to states to develop innovative strategies that connect communities with green spaces, provide opportunities for outdoor recreation and engage health professionals in educating parents and caregivers.

Scientists call for the establishment of a gulf-wide response group

A unified research and monitoring effort is needed to guide what will be a years-long endeavor to protect the Gulf of Mexico and its inhabitants from the BP oil spill, scientists say. The experts gathered at a November symposium cosponsored by NWF, Mote Marine Laboratory and the University of South Florida.


“Right now there is no agency that pulls together and coordinates all the information we need about the gulf,” says Michael Crosby, Mote’s senior vice president for research. “Scientists at different institutions might be collecting different pieces of data—but if we don’t put those together, we could miss the big picture until populations crash.” With the establishment of a gulf-wide response team, researchers could pool many kinds of ecological data to identify emerging issues and provide direct feedback to marine resource managers.

“We don’t believe the oil disaster is over,” NWF Regional Executive Director John Hammond says. “We do believe that there are some very specific scientific studies that need to be done to show us where the impact is and where the appropriate interventions ought to be. It’s essential to support ongoing research and monitoring efforts to determine the full repercussions of the spill and to inform restoration strategies and future policy decisions.”

Wind Power in the U.S. Atlantic

More than 980 offshore wind turbines are spinning right now in Europe. Despite proposals for projects that would generate enough energy to power roughly 1.5 million homes, not one is operating off the U.S. Atlantic coast.

“We need a coordinated and comprehensive effort of government and the market to bring these and other projects over the finish line,” says NWF Regional Executive Director Curtis Fisher. “This new industry holds great potential to create jobs, cut pollution and reduce our reliance on dirty fossil fuels.”

In December, joined by 40 state and national partners, NWF released Offshore Wind in the Atlantic: Growing Momentum for Jobs, Energy Independence, Clean Air, and Wildlife Protection. The report outlines the policy steps needed to ramp up clean energy that is consistent with protecting fish and wildlife. These steps include improving the permitting process, identifying high-priority sites with limited resource conflicts, investing in research of offshore wind technology and environmental impacts, and coordinating planning with existing infrastructure and industries.

National Wildlife will be marking a milestone of its own in December: 50 years of publication. If you’ve been a subscriber since the magazine’s inception—or been reading our pages since the 1960s—we’d love to hear from you. Email Mark Wexler or drop us a line at National Wildlife Magazine; 11100 Wildlife Center Drive; Reston, VA 20190. 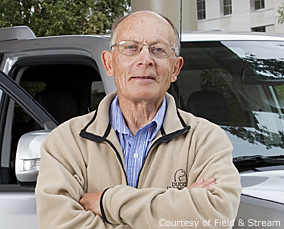 When Dupree, a retired forester, noticed a decline in Nevada’s sage-grouse population in the late 1990s, he began conducting census counts. Since then, he has mobilized volunteers to monitor the birds’ leks, helped to develop a handbook that describes how landowners can improve sage-grouse nesting habitat and worked to remove piñon pine trees encroaching on courting grounds.

“I just love the sage-grouse, and I want to protect them,” says Dupree. “They’re an indicator of the health of the habitat. If they’re not doing well, other populations of wildlife are not doing well either.”

NWF pays tribute to Americans who have made a difference

The Conservation Hall of Fame® was established by NWF in 1963 at its former headquarters in Washington, D.C. “There were halls of fame in this country for everything from baseball players to musicians,” said former NWF Executive Vice President Thomas Kimball at the time. “We thought it was high time for Americans to honor those citizens who have made a major contribution to conservation.”

Late that year, NWF’s board of directors approved the first inductee: Theodore Roosevelt, who during his presidency established the U.S. Forest Service, the nation’s first national wildlife refuges, 5 national parks and 18 national monuments. “He didn’t invent conservation,” observed this magazine in the August/September 1964 issue. “But what he did was channel the various streams of activity into a single river that, with direction and momentum, could no longer be ignored.”

Over the years, NWF also has recognized several conservationists whose names are less familiar to most people in this country, but whose accomplishments clearly are impressive. Anna Botsford Comstock, for instance, founded the nation’s first nature-education program in the late 1880s in New York, which was later adopted by Cornell University and schools across the country. Another honoree, Ira Gabrielson, became the first director of the U.S. Fish and Wildlife Service in 1940, a position that enabled him to preserve more wetlands for North American waterfowl than anyone else in the nation’s history. In all, 32 Americans have been honored posthumously by the Federation’s board, including the most recent inductee: A. Starker Leopold, the former conservation policy scholar who advised federal natural-resource agencies and taught for three decades at the University of California–Berkeley.

“They are all sources not only of invaluable knowledge and achievements, but also of great inspiration,” says NWF President Larry Schweiger. The Conservation Hall of Fame is now housed at the Federation’s headquarters in Virginia.

State Affiliates: How You Can Get Involved

NWF affiliates are autonomous, statewide, nonprofit organizations that take the lead in state and local conservation issues and also partner with NWF to conduct grassroots activities on national issues. There are currently 47 affiliates, including those in the Virgin Islands and Puerto Rico. Contact your affiliate to learn how you can get involved with projects in your state.