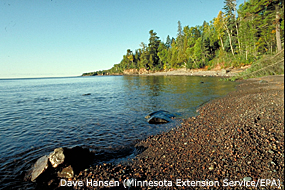 For decades, federal authorities have allowed ships entering the Great Lakes and elsewhere to dump their ballast water—along with the zebra mussels and other destructive nonnative species living in that water—unimpeded into U.S. coastal areas. The toll of those invasive species on the nation’s native wildlife and economy has been enormous. Now, as a result of an agreement reached in March between the U.S. Environmental Protection Agency (EPA) and conservationists, the agency must regulate ballast discharges by commercial vessels.


The settlement resolves a lawsuit brought against EPA in 2009 by NWF, several of its state affiliates and other conservation groups. It requires the agency to treat invasive species as aggressively as it would other forms of water pollution—something it has not done in the past. “The EPA must get it right this time,” says Marc Smith, senior policy manager at NWF’s Great Lakes Regional Center. “The millions of people, communities and businesses that have borne the brunt of the invasive species onslaught are now counting on the EPA to take strong action to protect our wildlife, environment and economy.”

Limiting ballast-water dumping in the Great Lakes and other coastal areas is an important step, say conservationists, in what must be a larger effort to curb the spread of aquatic invasive species throughout the country.

For his ongoing commitment to protecting the environment, NWF honored Robert Redford with its Ding Darling Conservationist of the Year award at its National Conservation Achievement Awards banquet in April in Washington, D.C. The distinguished actor and film director has spoken out against ill-conceived plans to destroy the nation’s natural heritage for the past four decades, long before doing so became a popular cause.

Among his many accomplishments, Redford has played an active role in safeguarding several important wilderness areas such as Utah’s Grand Staircase-Escalante, which is now a national monument. He also has joined conservationists in raising awareness about the threats posed by global warming.

“I am truly honored to receive this award from NWF with its rich 75 years of conservation and education history,” said Redford. “I believe NWF’s efforts are more necessary now than ever to protect our natural resources and prepare the next generation of environmental stewards.”

NWF also honored Michelle Obama with a Special 75th Anniversary Conservation Award for her work to encourage youngsters to eat healthy and explore our country’s great outdoors. “The First Lady deserves tremendous credit for her work to inform families about the importance of nature and the vital role it plays in the health of America’s youth,” said NWF President Larry Schweiger. Read about the other NWF award recipients.

A recent court ruling upholding a U.S. Environmental Protection Agency (EPA) decision to block construction of the Yazoo Pumps was a win for NWF and Mississippi Wildlife Federation, which worked for decades to defeat the project. The ruling confirmed EPA’s ability under the Clean Water Act to veto Army Corps projects that will have unacceptable adverse impacts on wildlife, fisheries, water supplies and recreational areas.

For going “above and beyond” to advance conservation education through service, NWF recently recognized Peter Schutt, a businessman and board member of the Tennessee Wildlife Federation (TWF), as its 2010 Volunteer of the Year. “The impact of his service can be summed up in this statement,” says Dan Hammond, TWF board chair: “Peter Schutt creates opportunities”—most notably for youth.

“In 2005, Peter approached TWF with his vision for a program that would provide access to nature to kids who otherwise wouldn’t have the means to experience wild places,” adds Hammond. Schutt provided the financial resources to make that vision a reality, and Great Outdoors University (GOU) was created.

Since then, Schutt has helped to build a network of nonprofits, businesses, volunteers and others to support the acclaimed program of NWF’s Tennessee affiliate. To date, thousands of kids in Memphis and Nashville have participated in GOU’s day camps and overnight trips, where they learn outdoor skills and develop relationships with peers and mentors.

Fighting Battles in Our Backyards

Across the country, NWF affiliates are engaged in a wide range of conservation work

During NWF’s annual meeting in Washington, D.C., in April, representatives of the organization’s 47 state affiliates came together to discuss important local and national issues. “These groups are the backbone of much of our work,” says Dan Chu, NWF vice president for affiliate and regional strategies.

At the meeting, the Texas Conservation Alliance (TCA) was honored as the Affiliate of the Year. The 40-year-old group has a long record of protecting wildlife habitats in the Lone Star State. Currently, TCA is leading a coalition urging federal authorities to designate the Neches River in East Texas as a National Wild and Scenic River, a move that would protect the important waterway from further development.

Elsewhere in the nation, other NWF affiliates are actively pursuing a wide range of conservation endeavors, including:

In the Ozark Highlands, the Arkansas Wildlife Federation is helping lead a project designed to re-establish elk habitat on national forestlands where the animals are being reintroduced to help restore the area’s natural ecology.

On the island of Kaua‘i, the Conservation Council for Hawai‘i and its partners recently reached a successful settlement of a lawsuit the groups had filed to protect nesting habitat of two of the Aloha State’s imperiled birds: the threatened Newell’s shearwater and the endangered Hawaiian petrel.

In Alaska, the Renewable Resources Coalition is working with members of NWF’s Alaska Youth for Environmental Action program on a statewide campaign to bring greater protection for the state’s important wild salmon populations.
Locate an affiliate in your state.

NWF has partnered with Ducks Unlimited to launch Vanishing Paradise, a national campaign for mobilizing hunters and anglers in support of restoring Louisiana’s Mississippi River delta. The coastal region, known as a sportsman’s paradise, hosts as many as 10 million geese and ducks during winter—roughly 70 percent of the waterfowl that use the Central and Mississippi Flyways. Targeting hunters and anglers makes sense, says NWF Coastal Louisiana Organizer Chris Pulaski: “Sportsmen across the country already know how important these wetlands are. We’re just giving them the tools to do something about protecting a place they already love.” More than 450 businesses and thousands of individuals have joined the campaign.

On Saturday, June 25, trade screen time for green time by participating in NWF’s seventh annual Great American Backyard Campout. “When you connect with family and friends in the great outdoors, you create lasting memories,” says Karoline Hurd, NWF’s senior manager of events. For more information, including a list of camping essentials, visit www.backyardcampout.org.

Hit the Trail with Ranger Rick

Family-friendly, wildlife-themed treasure hunts await explorers at parks and other public places throughout the United States. Be among the first to navigate one of Ranger Rick’s Geocache Trails.

Newly launched, “Ranger Rick’s Geocache Trails help kids and adults connect with the natural world by encouraging them to solve animal-themed mysteries and engage in ‘More to Explore’ nature activities,” says Megan Isom, one of the program’s creators. Before setting out on a chosen adventure, participants print a passport and download their trail’s coordinates to a GPS unit or smart phone, which they use to locate a series of hidden treasures known as geocaches. According to Isom, “The program is designed to be fun for both first-timers and experienced geocachers.” Visit www.RangerRickTrails.com to find a trail near you.

Montana drivers help spread the word: “No Child Left Inside”

U.S. youngsters today spend, on average, more than 50 hours a week indoors in front of an electronic screen. Montana residents now can help change that statistic by purchasing NWF’s new “No Child Left Inside” license plate. Twenty dollars from every plate purchased goes directly to programs that give the state’s children opportunities and encouragement to get outside. In addition, the license plate helps spread the word that kids need to spend more time outdoors exploring, learning and playing.

That’s the message of NWF’s Be Out There™ campaign, which provides dozens of activities for families, schools and entire communities, as well as information about the health benefits of outdoor play. Those benefits are at the forefront of a landmark new federal government report called America’s Great Outdoors, which NWF contributed to as part of its efforts to connect children with nature.

“By making outdoor time a national priority, we are taking a much-needed step—out the door—to healthier, happier kids,” says NWF President Larry Schweiger. “The nature of childhood has changed, and there’s not much nature in it. This report provides a blueprint for reversing this alarming trend.”

No safeguards are in place for proposed pipeline carrying corrosive product

According to a recent report released jointly by NWF, the Natural Resources Defense Council (NRDC), the Pipeline Safety Trust and Sierra Club, a plan to transport oil from the tar sands region of Alberta, Canada, to the Texas gulf coast is fraught with serious problems. Under the plan, Tar Sands Pipeline Safety Risks warns, a proposed pipeline would carry a raw form of oil called diluted bitumen that is significantly more acidic and corrosive than standard oil and has five to ten times as much sulfur content as conventional crude.

Residents of Michigan learned first-hand about that risk last summer, when a pipeline carrying diluted bitumen ruptured, dumping nearly a million gallons of the substance into the Kalamazoo River and fouling the region for miles around. “U.S. regulators have yet to create any new safeguards for this product even though more and more of it is being piped through our lands and waters,” says NWF Energy Policy Advisor Ryan Salmon. “That’s a recipe for disaster.” Find out more about NWF’s efforts regarding the proposed tar sands pipeline.