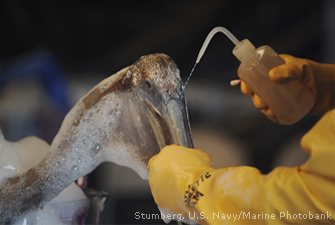 Law would direct billions of dollars to restoring coastal wetlands

NWF and six partners working to restore wetlands along the Gulf of Mexico had cause to celebrate this summer: In July, a bipartisan coalition of the region’s senators introduced the RESTORE Gulf Coast States Act, which would ensure that 80 percent of penalties owed by BP and others responsible for the Gulf oil disaster go to restoring the coast’s communities and habitats. Without new legislation, these funds—expected to total between $5 billion and $20 billion—would be deposited in the federal treasury and used for other purposes.

The 2010 spill wreaked havoc both with the region’s people and its environment. But the disaster also has provided a unique opportunity to bring back the battered coastline, where Louisiana alone has lost 2,300 square miles of wetlands since the 1930s. Scientists say billions of dollars will be needed to restore the coast—and during the past year NWF and its partners have been working closely with key Senate offices to craft legislation that could provide that funding through oil spill penalties.

“We are very pleased that the Gulf Coast senators came together to introduce a bipartisan bill and look forward to working with them throughout the process to secure the best possible result for restoration,” says NWF’s Karla Raettig, program director for Coastal Louisiana Restoration. To learn more, go to www.nwf.org/restoration.

NWF’s Critical Paths Project, in partnership with Vermont’s top wildlife biologists, transportation experts and other conservation organizations, has identified 25 vital wildlife crossings over state roads. Many animals travel these routes, yet the paths are under great threat from impacts such as development.

On U.S. highways, a vehicle hits a wild animal at least every 26 seconds. The Critical Paths Project is working with local communities to implement commonsense solutions in high-animal-traffic areas such as reducing speed limits, cutting back brush to provide drivers clearer views and posting animal-crossing signs. George Gay, NWF’s Northeastern Regional Center wildlife program manager who works on the project, says, “Moose, bobcats, bears and other wildlife depend on us to ensure they can safely find food and shelter.”

Perhaps that is what a moose was trying to tell reporters at a recent press conference held to announce the project’s findings. She appeared near one of Vermont’s most traveled wildlife crossings over Route 100. Because of Critical Path’s work, Vermont’s Agency of Transportation will host a workshop this fall to encourage engineers to collaborate with wildlife managers on designing safer wildlife crossings.

The Critical Paths Project is part of the Staying Connected Initiative, which is linking six crucial wildlife habitats in the northeast United States and Canada.

NWF joined with a coalition of public health, faith and conservation groups in July to deliver more than 800,000 letters to the U.S. Environmental Protection Agency (EPA) Region One office in Boston. The letters, written by concerned citizens from all 50 states, supported EPA’s efforts to curb dangerous mercury pollution from coal-fired power plants.

Increasing demand for timber, soy, palm oil, biofuels, beef and leather are furthering global deforestation, yet many companies are unaware of the “forest footprint” their products and supply chains can create.

NWF is reaching out to 125 leading North American companies to engage them in the Forest Footprint Disclosure Project, designed to help them identify ways they can reduce their contributions to deforestation. In 2010, 12 U.S. companies participated—including major brands like PepsiCo, Best Buy, Avon, Lowe’s and Timberland. The project recognized three—Kimberley-Clark, Nike and Weyerhaeuser—as global leaders for producing forest-friendly products.

Major firms also have asked companies in which they invest to participate. However, consumers have some of the greatest influence on the market.

Nathalie Walker, NWF’s Tropical Agriculture, Forest and Climate Project manager, notes, “In recent years, many farmers and ranchers in regions with high levels of deforestation have responded to their buyers’ concerns by not clearing any more forest. But wider, longer-term efforts by corporations are needed to create sustainable markets for deforestation-free products.”

Partnership will advance science-based conservation and sustainable use

As part of its efforts to address numerous threats to the marine environment, NWF has formed a long-term partnership with the prestigious Mote Marine Laboratory in Florida. “From the Gulf oil disaster to ocean acidification fueled by climate change, the threats to America’s marine life and habitats have never been greater,” says NWF President Larry Schweiger. “Now is the time to combine the strengths of our two organizations to inspire Americans to face these challenges together.”

Mote Marine Laboratory has been a leader in science-based ocean research since it was founded in 1955. Today, its seven centers specialize in a variety of marine and coastal studies, ranging from reef and fisheries enhancement projects to dolphin, whale and sea turtle investigative programs.

Initially, the two organizations will work together on an innovative research and public outreach initiative focused on coral reef ecosystem restoration in the face of increasing sea-surface temperatures and ocean acidification. “This agreement provides a vehicle for us to build on Mote’s strength as an internationally respected scientific enterprise and on NWF’s strong advocacy efforts to create solutions for the challenges related to long-term conservation and sustainable use of ocean resources,” says Michael Crosby, Mote’s senior vice president for research.

Study provides tools to assist climate-smart efforts in the region

Climate change is bringing new challenges to people living around the Great Lakes, changing the way communities approach conservation. To help them better plan for the future, NWF, in conjunction with the nonprofit EcoAdapt and the National Oceanic and Atmospheric Administration (NOAA), recently released a new report outlining methods to ensure that coastal planning and restoration projects are completed using “climate-smart” techniques.

“Our region has 20 percent of the world’s freshwater reserves and a rich collection of fish and wildlife, all of which could be devastated by the impacts of climate change,” says Melinda Koslow, campaign manager for NWF’s Great Lakes Regional Center and one of the authors of Restoring the Great Lakes Coastal Future.

Illustrated with several case studies, the report provides options for reducing vulnerability to warming. “This guidance is a great tool to help ensure that coastal restoration projects in the Great Lakes will endure as the climate continues to change,” says Pat Montanio, director of NOAA’s Office of Habitat Conservation.

As part of its efforts to connect kids with nature, NWF assists schools in developing outdoor classrooms called Schoolyard Habitats®, where students can hone their academic skills and learn how to attract and support local wildlife. NWF offers a how-to guide, lesson plans and community outreach tips to educators and parent volunteers. 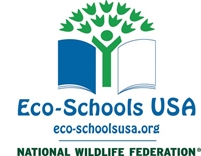 Nearly 600 U.S. schools are now NWF Eco-Schools, having reduced their environmental footprint. Green Flag schools, however, have completed a seven-step certification program, which includes an extensive audit, ensuring environmentally sound operating procedures and broadening the environmental education of not only their students but also faculty and communities.

Among the changes the first Green Flag recipient, Georgia’s private Savannah Country Day School, made was to create its own NWF certified habitat that includes water catchment cisterns and composting areas. The Boston Latin School, the nation’s first public school, launched a recycling pilot program that reduced waste by 50 percent and will be implemented in Boston public schools. Virginia’s Lanier Middle School created a wildlife habitat with a vernal pool.

NWF has teamed up with the film Dolphin Tale to educate kids and families about dolphins and to inspire more people to protect the marine mammals and their ocean habitat. Opening in theaters across the country on September 23, the movie stars Morgan Freeman, Harry Connick, Jr., Ashley Judd and Kris Kristofferson. It was inspired by the amazing true story of a living dolphin and the people who worked together to save her life.

In the film, the animal—later named Winter—is rescued after being caught in a crab trap but loses her tail. A dedicated marine biologist, a brilliant doctor and a devoted young boy bring about a miracle: a prosthetic tail to help Winter swim again.

Shot on location at Clearwater Marine Aquarium in Florida, the movie features the real-life Winter playing herself. She is a symbol of perseverance and hope for the millions of people—both able and disabled—who have been touched by her remarkable recovery.

As the official education promotional partner for Dolphin Tale, NWF has developed a number of online resources. NWF offers an educator guide to accompany the film. You also can see Winter on her webcam.

Take the youngsters in your family on a fun-filled Saturday morning adventure in October with National Wildlife Federation’s Hike & Seek™. A cross between a 1- to 2-mile nature hike and a scavenger hunt, the events are part of NWF’s efforts to connect kids with nature through its Be Out There™ movement. They will take place in parks in Denver, Colorado (October 1), Atlanta, Georgia (October 15), Bernardsville, New Jersey (October 15) and Washington, D.C. (October 22). Participating families also have the opportunity to help NWF raise funds to get more children outdoors.