In the tropical Americas, a novel network of nature reserves gets funding from bird-watchers eager to add rare species to their life lists 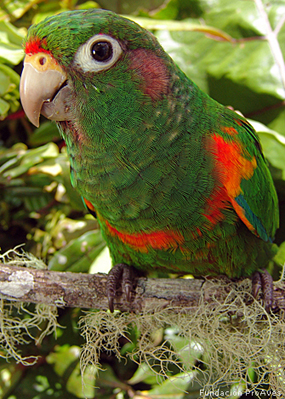 AS A COPPER-COLORED SUN sank behind rugged, mist-shrouded mountains, a trio of visitors to northern Colombia trained their binoculars on a dozen hummingbird feeders nestled among palms, bromeliads and other native plants. Not surprisingly, in a country that’s home to more bird species than any other—1,869 and counting—feeders and plants alike were buzzing with avian activity: flycatchers, warblers, euphonias, tanagers and an array of iridescent hummingbirds including the Santa Marta woodstar, found nowhere else in the world but this small corner of Colombia.

The experience was remarkable for another reason as well: “By visiting us, you are helping conserve these birds and their habitat,” said Christian Olaciregui, a biologist with the Colombian conservation group Fundación ProAves and manager of the organization’s El Dorado Bird Reserve, where the visitors had gathered for late-day birding. Sheltering 1,729 acres of tropical cloud forest on a huge massif—called Santa Marta—long isolated from the rest of the Andes, El Dorado houses 364 bird species, 17 of them endemic, or found nowhere else on Earth. The reserve also hosts hundreds of human visitors a year. The money they spend on entrance fees, food and lodging goes directly toward maintaining El Dorado, Olaciregui said. As of mid-2010, 85 percent of the reserve’s operating costs were covered by tourists, the majority of them bird-watchers.

El Dorado is one of 45 privately run protected areas across Mexico and Central and South America that make up the American Bird Conservancy (ABC) Latin American Bird Reserve Network. Working in 12 nations with 18 in-country conservation groups, ABC has purchased or helped facilitate protection of more than 750,000 acres of critical bird habitat across the region. Within the reserves, scientists so far have recorded 2,025 bird species—138 classified as threatened or endangered by the International Union for Conservation of Nature—or nearly half of all bird species found in the Americas.

The reserves protect more than birds. “The tropical Americas are home to around a third of all species on Earth,” says Nathalie Walker, manager of NWF’s Tropical Agriculture, Forests and Climate Project. She notes that the region’s forests are also critical to producing rainfall, preventing erosion and combating global warming by storing huge amounts of carbon. And they include some of the most threatened forests on the planet.

ABC Vice President Mike Parr says establishing the reserves was the relatively simple part: “It’s a lot easier to raise money to buy land than to raise money to protect or manage land.” The solution: a novel international tourism initiative, dubbed Conservation Birding, that attracts birders to the reserves and channels their money toward maintaining the protected areas.

According to the U.S. Fish and Wildlife Service, more than 15 million U.S. citizens travel each year to watch birds, spending more than $300 billion during their journeys. “International birding already is popular,” Parr said at a press conference announcing the tourism initiative. “We want birders to know that their pastime can actually contribute to saving the species they love.” So far, 18 reserves have constructed lodges, trails and other facilities for visitors and are covering at least some expenses with dollars spent by bird-watchers.

Among the must sees on many traveling birders’ lists are Neotropical migrants: warblers, tanagers and other birds that breed in Canada or the United States but winter in the American tropics. In some cases, it’s easier to spot the birds there than in their summer breeding grounds.

On the opposite slope of the Andes from El Dorado, for instance, birders are beginning to discover the Cerulean Warbler Bird Reserve, the first South American protected area established to safeguard a species that breeds exclusively in North America. Since the 1960s, breeding populations of ceruleans have dropped steeply. Scientists say the declines stem in part from loss of the species’ winter habitat in the northern Andes, a region that is losing forests more rapidly than even the Amazon.

Cerulean reserve manager Eduardo Quevedo, a ProAves biologist, says nearly half the protected area’s expenses are covered by a combination of tourism and production of bird-friendly, shade-grown coffee. But he adds that birders who visit the reserve are worth more than the money they spend. Like many protected areas in Latin America, the cerulean reserve is a small island—545 acres—within a sea of increasing numbers of residents. Their support for the reserve and willingness to cut fewer trees on their own land is critical to the survival of cerulean warblers and 385 other bird species that share the forest. “When foreigners travel all the way here to look at birds,” Quevedo says, “local people begin to realize the value of what they have and start thinking about decreasing deforestation.”