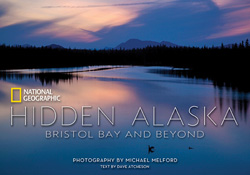 Home to the largest salmon spawning ground on the planet, to brown bears, countless birds and other wildlife, Alaska's Bristol Bay faces an imminent threat of massive upheaval from open pit and underground mining and other resource development at its headwaters.

To showcase the 49th state's natural beauty and what's at stake to the nation if the Bristol Bay area is developed, Alaskan writer Dave Atcheson teamed up with veteran photographer Michael Melford to produce Hidden Alaska: Bristol Bay and Beyond, published by National Geographic Books.

The 160-page new release is primarily a photographic journey that showcases the images of Melford, who has worked with National Geographic on a wide variety of books and articles since 1993. He shot some 20,000 photographs for a feature last December in the magazine about the controversy surrounding the proposed Pebble Mine project in Bristol Bay. 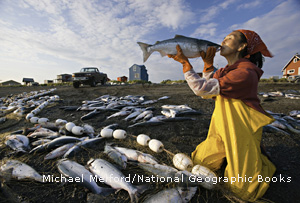 His collaborator, Dave Atcheson—a board member of National Wildlife Federation's Alaska affiliate, the Renewable Resources Coalition—has worked for the state's Department of Fish and Game and has lived on the Kenai Peninsula since 1985. He is the author of the guidebook Fishing Alaska’s Kenai Peninsula and is a regular contributor to Alaska magazine.

For Hidden Alaska, he produced a series of essays celebrating the state's wild splendor, people and politics. The book's title refers to those areas of the state that many people have not seen, including the Bristol Bay region—a true microcosm of all that remains unique and wild.

Melford and Atcheson describe their project as "ultimately a work of hope—hope that much of Alaska and especially Bristol Bay will remain wild." It is a book, they say, "whose purpose is not to be a record of what we may potentially lose but rather what can still be saved."

Hidden Alaska: Bristol Bay and Beyond will be available in bookstores and from National Geographic Books starting February 15.