Butterflies across the nation face dangerous threats that include global warming 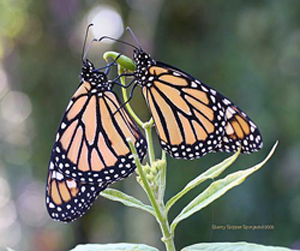 Why Butterflies Are on the Brink

Butterflies are not only among the most beautiful insects in the world, they are among the most beautiful of all creatures—living flashes of sunlight and rainbow. But now, worldwide, many butterfly species have begun to dwindle and even disappear. In the United States, the U.S. Fish and Wildlife Service has designated 23 species as endangered or threatened.

Butterflies suffer from the same ills that plague all wildlife these days: habitat loss, pollution, global warming and competition from alien species that are invading butterfly habitat. The common monarch butterfly (photo at left) has been jeopardized by habitat loss in Mexico, althought biologists are predicting that a bumper crop of monarchs, some 200 millon of them, will wing across Texas from Mexican wintering sites in 2011.

Experts say the insects also face unique hurdles. Their complicated life cycles may take one or two years to complete. They spend long periods in vulnerable growth stages called larva and pupa. And they form complex relationships with many other animals and plants.

In addition, many butterflies have extremely exact needs that may vary depending on life stage. For example:

In California, home to 15 federally protected species, larvae of the endangered San Bruno elfin prefer the leaves of a plant called sedum, while later larval stages feed on the plant’s flowers; adults are believed to sip nectar from manzanita, huckleberry and other plants.
The endangered Smith’s blue, native to sand dunes of California’s central coast, has mouthparts that exactly match the depth of buckwheat flowers.
Butterfly conservation is especially challenging because the biological details of the insects’ lives often remain murky. In many cases, scientists do not even know what a species’ caterpillar looks like or what the adult eats. “There’s a whole world of things we don’t know, things that no one has had the time or money to study yet,” Jaret Daniels, assistant director of the McGuire Center for Lepidoptera Research at the University of Florida, says. “Oftentimes, we don’t have the information to make informed decisions about which species are declining.”

Should You Care About Vanishing Butterflies?

Of course. Butterflies play a key role in plant reproduction, transporting pollen from flower to flower. They provide food for birds and other creatures. “People may say, ‘Why care about butterflies? They’re just insects,’” says Scott Hoffman Black, executive director of the Xerces Society, an Oregon-based national nonprofit that campaigns for invertebrate conservation. “But butterflies are bellwethers for ecosystems, and we’re seeing butterflies at risk across the U.S. Everywhere you look, there are butterflies in decline. That really tells us something is wrong.”

The Number One Cause of Butterfly Loss

Daniels and most other researchers point to habitat loss as the main cause of butterfly declines. In the United States, perhaps no habitats have been so thoroughly changed as the meadows, grasslands and sparsely wooded prairies, barrens and savanna often favored by butterflies. Since these ecosystems are so easy to turn into subdivisions, farms and industrial parks, they have all but disappeared from most of the lower 48 states. In the Midwest, for example, less than 1 percent of pre-settlement oak savanna remains; in the Northwest, less than 3 percent. With space limitations that severe, it can be difficult to bring a species back from the brink, or even to convince authorities that it is an achievable goal worth the trouble.

Even intact habitats can be risky places for butterflies. Since the insects spend long periods as soft, slow-moving caterpillars, or as immobile pupae busy metamorphosing into butterflies, activities such as hiking and horseback riding, or crews removing invasive species, can wipe out an endangered colony, says Hoffman Black.

Random Thoughts: Relocating Butterflies to Save Them
“We’re going to have to seriously consider assisting species in moving to new habitats—humans have put up too many barriers to expect wildlife to follow changing climate on its own.  The biggest questions will be ethical, deciding which species to assist, which areas are okay to invade, and when to let nature take its course, even when that means allowing something to go extinct.” —Camille Parmesan, biologist, University of Texas at Austin

As with legions of other creatures, global warming threatens to hurt butterflies badly. In North America, butterfly experts report that some cool-weather species seem to be moving to higher elevations as their native habitats get too hot. “We’re clearly seeing climatic effects where species are moving upslope,” says Arthur Shapiro, a professor of evolution and ecology at the University of California–Davis. A 2005 study in Spain showed that 16 butterflies have shifted their ranges upward 700 feet over the past 30 years. But what happens when there is no more upslope? When a species’ habitat vanishes completely, the species is likely to do so too.

Rising temperatures also can cause butterflies to get out of sync with their food plants. Along North America’s West Coast, a study led by Camille Parmesan, a biologist at the University of Texas at Austin, showed that the range of Edith’s checkerspot is shrinking—80 percent of the populations in the southern portion of its range in Mexico have become extinct. The reason, she believes, is that warmer temperatures are causing the host plants on which butterflies lay their eggs to dry up before caterpillars hatch. 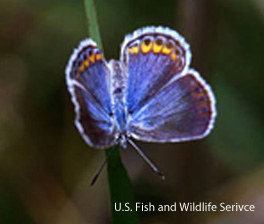 Help for Butterflies Is on the Way

Fortunately, the problems of checkerspots and other butterflies have begun to rally the support of a wide variety of conservation organizations. A handful of conservation biologists are even floating the idea of “assisted migration”—taking butterflies from places where they are threatened and moving them to more congenial areas. But the issues are complex: Do you just move the butterfly? Or do you have to move its host plant and other elements of its habitat? And how do you know if a butterfly will integrate smoothly into its new habitat without disturbing native species?

“We’re working our way to recovering viable populations throughout its range,” says Cathy Carnes, the U.S. Fish and Wildlife Service’s Wisconsin-based recovery coordinator for the Karner blue butterfly (photo above). “People recognize that by recovering Karner blues they’re doing more than saving one species, they are restoring imperiled ecosystems and a host of other species that depend on them.”