Federal law protected the nation’s streams and wetlands for decades; now, due to recent Supreme Court interpretations, the safeguards are at risk and so are many of America’s waters 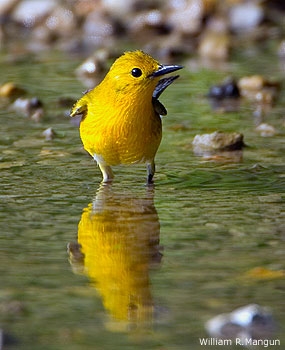 ABOUT 35 MILES NORTHWEST of Charleston, South Carolina, lies a perfect example of what’s wrong with the federal Clean Water Act today. To understand that example, however, you need to start where two rivers converge to form Charleston Harbor. Here the act is in force, protecting wildlife and the human environment from toxic pollution and other threats.

But follow one of the rivers—the Ashley—upstream, and the situation begins to change. Eventually, you’ll come to cypress swamps where prothonotary warblers (left) nest and swallow-tailed kites patrol the air. From there, small perennial streams lead you to Black Tom Bay and the Pine Hill Tract, 2,000 acres of wetland and high ground. For most of the Clean Water Act’s history, everything from the mouth of the Ashley River to the wetlands in Pine Hill was safeguarded.

Today, however, two U.S. Supreme Court decisions have muddied the picture. The first, in 2001, clouded the issue on bogs, prairie potholes, playa lakes, Carolina bays, fens, pocosins and other so-called “isolated” wetlands, lakes and other waters. In a close five-to-four ruling, the court gave new weight to the Clean Water Act’s use of the term “navigable waters,” saying that a wetland not connected to a “navigable” river or lake was not covered under the law.

The second case, in 2006, was Rapanos v. United States. It was supposed to bring clarity to the law but instead, “created a big mess,” says Jan Goldman-Carter, NWF wetlands and water-resources counsel. Four justices favored broad protection while four others narrowed the scope of the law to waterways that were navigable, “relatively permanent” or closely connected to such waters. Justice Anthony Kennedy, the ninth member of the court, was more inclined toward broad protection but not without proof of a “significant nexus” between the wetlands at issue and downstream navigable waters. Goldman-Carter says the split ruling left a wreckage of once orderly guidelines in its wake.

Wetlands and Streams in Jeopardy

The Rapanos decision jeopardized much more than isolated wetlands. At least 20 percent of the wetlands remaining in the lower 48 states are no longer receiving federal protection, and slightly more than half of the stream miles also are under the gun. Many small and intermittent streams are now at risk nationwide even though nearly a third of all Americans get at least part of their drinking water from them. Some lakes, especially those without an outlet, also are in jeopardy. Even more disturbing, the U.S. Environmental Protection Agency (EPA) and the U.S. Army Corps of Engineers, the two federal agencies charged with enforcing the Clean Water Act, often cannot take action against polluters and irresponsible developers because no one is exactly certain which waters are protected.

The Pine Hill Tract is a case in point. Less than a year after the Rapanos case, the Corps of Engineers declared the tract isolated and outside Clean Water Act jurisdiction. This ruling allowed the owners to develop all of the property without a federal permit to protect water quality even though historical records and photography show that nearly 500 acres of Pine Hill’s wetlands are not isolated. Instead, they flow directly into nearby Wassamassaw Swamp, drain from there into the Ashley River and ultimately reach Charleston Harbor. Last year, the South Carolina Wildlife Federation and the Coastal Conservation League, represented by the Southern Environmental Law Center, filed a 60-day notice of intent to sue. The Corps, with backing by the owner of the Pine Hill site, quickly rescinded its determination that the act did not cover the wetlands. “If it weren’t for our lawsuit, those wetlands would have remained unprotected,” says Jim Murphy, an attorney for NWF.

Once there were more than 220 million acres of wetland in the United States. By the early 1970s, half of those had been ditched, drained or paved over, and many rivers and streams were open sewers. Ohio’s Cuyahoga River was the most infamous of the lot, with surface oil slicks catching on fire more than half-a-dozen times. It was obvious that state laws were failing to safeguard the nation’s waters. Once Congress passed the Clean Water Act, things changed. Today, we take clean water for granted. “The Clean Water Act has been one of the most successful environmental laws we’ve ever had, but the erosion over the last 10 years has been troubling,” Murphy says. “We all depend on clean water. We drink it, use it for farming, and it’s important for hunting and fishing. Until we restore the Clean Water Act, many areas are going to find themselves with polluted water. The gulf oil spill has shown us there’s a strong link between environmental well-being and economic security. When our waters get polluted, our communities suffer.”

Wildlife suffers, too, as the weakening of the Clean Water Act opens the door to uncontrolled wetlands development. More than 50 percent of North America’s ducks rely on prairie potholes for nesting. These small glacial depressions, located mostly in the Dakotas, are now vulnerable to destruction. Another potential casualty are playas—shallow, seasonal lakes scattered from Montana to Texas. More than 60,000 of them punctuate the High Plains. “Canvasbacks, gadwall, shovelers, teal, pintails and other migratory waterfowl depend on them,” says Dennis Buechler, a retired U.S. Fish and Wildlife Service ecologist and director emeritus of the Colorado Wildlife Federation. “So do shorebirds and many other species like yellow-headed blackbirds and marsh wrens.”

Besides providing habitat for wildlife, small streams and wetlands also filter out pollutants and absorb floodwaters. They recharge groundwater. Streams and their adjoining wetlands serve as migration corridors, allowing species to move in times of shifting weather and temperature patterns. With the effects of global warming being felt in many parts of the country, these last benefits may be among the most important in coming years. “Eliminating wetlands without taking climate change into consideration is not acceptable,” says Kim Diana Connolly, a wetlands expert and professor at the State University of New York at Buffalo Law School.

The Clean Water Act rulings also are turning back the calendar to a time of polluted wetlands and streams. For example, when a pipe-manufacturing company dumped oil, lead, zinc and grease into a perennial stream near Birmingham, Alabama, a jury in 2005 found the company guilty of violating the Clean Water Act. The U.S. Court of Appeals, however, overturned the decision in 2007, a year after the Rapanos case, saying the federal government had not shown the creek should be protected under current law. Dubious decisions like this one are now happening all over the United States, from West Virginia’s coal country to the desert canyons of southern Arizona.

“We really need Congress to act,” says NWF’s Goldman-Carter. In 2009, the Clean Water Restoration Act was introduced into the Senate and a similar bill into the House of Representatives in 2010. This legislation did not offer any new protection to U.S. waters; it simply would have restored the law that had been in effect for nearly 30 years. It would, however, have removed the word “navigable” from the act, to clarify what Congress meant when it passed the original law. Goldman-Carter points out that the very first sentence of the 1972 law states: “The objective of this Act is to restore and maintain the chemical, physical and biological integrity of the Nation’s waters” [emphasis added].

“Congress made significant progress,” says Goldman-Carter, “but unfortunately the bills stalled at the end of the session.” Now NWF is urging the Corps and EPA to write new regulations that would clearly support the broad range of waters covered under the Clean Water Act.

Federal agencies are responsible for these measures, says Goldman-Carter, because they are the experts charged with implementing the Clean Water Act through science-based regulations. She says they did that job very well following the act’s passage in 1972: Federal rules stood up to legal challenges for almost 30 years. “New regulations would not be a perfect fix,” adds Goldman-Carter, “but they can vastly improve the current confusion and provide a bridge until Congress passes legislation.”

Journalist Doreen Cubie is based in South Carolina.

NWF is urging the U.S. Army Corps of Engineers and the U.S. Environmental Protection Agency to initiate regulations that will protect wetlands, lakes and streams jeopardized by recent U.S. Supreme Court decisions weakening the Clean Water Act. NWF also is continuing its long commitment to protecting the nation’s waters in other arenas. During the past two years, NWF won court decisions which require that federal insurance supporting development in risky coastal areas will include measures to protect threatened and endangered wildlife. While potentially saving millions of taxpayer dollars, these court cases have led to changes that will preserve floodplain habitat in the Florida Keys and in Washington state’s Puget Sound area and that have protected the Florida key deer, orcas and salmon, among other species. NWF also is working to stop risky floodplain development as new issues arise. Find out more about NWF's efforts to protect water resources.