Beginning as a formidable force for conservation during the Great Depression, NWF today is grappling with some of conservation's gravest threats

In 1936, Pulitzer Prize-winning cartoonist and noted conservationist Jay N. “Ding” Darling launched a crusade to make the nation safer for wildlife and habitat. On February 3, he managed to convene some 1,500 citizens at the first North American Wildlife Conference. From Dust Bowl farmers to big-game hunters, women’s leaguers to Girl Scout leaders, they converged on Washington, D.C.'s Mayflower Hotel and made it clear that when it came to wildlife protection, what they wanted was action! Before they left four days later, they had founded the General Wildlife Federation—renamed “National” two years later—and elected Darling its first president. 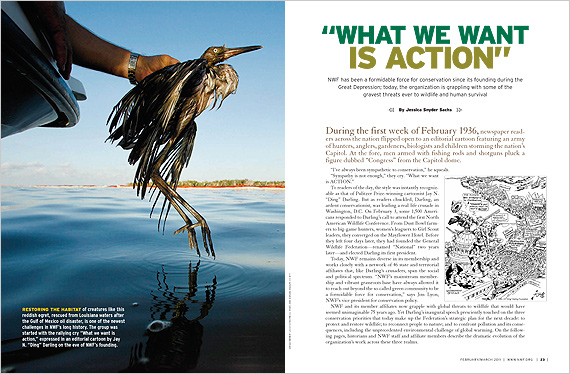 Darling's crusade continues today. NWF remains diverse in its membership and works closely with a network of 46 state and territorial affiliates that, like Darling’s crusaders, span the social and political spectrum. “NWF’s mainstream membership and vibrant grassroots base have always allowed it to reach out beyond the so-called green community to be a formidable force for conservation,” says Jim Lyon, NWF’s vice president for conservation policy.

NWF and its member affiliates now grapple with global threats to wildlife that would have seemed unimaginable 75 years ago. Yet Darling’s inaugural speech presciently touched on the three conservation priorities that today make up the Federation’s strategic plan for the next decade: to protect and restore wildlife; to reconnect people to nature; and to confront pollution and its consequences, which now includes the unprecedented environmental challenge of global warming. There's a lot more to the story, and you will find it here.