From the October/November Issue of National Wildlife 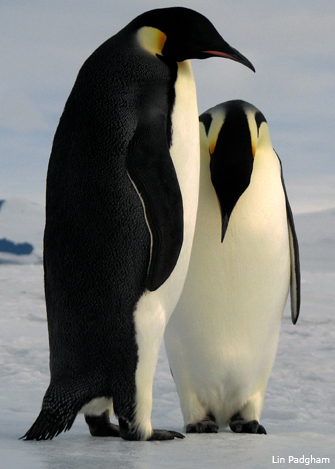 Penguins Do the Huddle

Male emperor penguins form huddles during the coldest and stormiest parts of the winter breeding season. These huddles may include thousands of birds, with as many as a dozen packed into each square yard. All huddled penguins face the same way, and nearly every one carries an egg on its feet, incubating the offspring. Huddling helps the birds stay warm, but a researcher at the Neumayer Antarctic Research Station, using time-lapse photography, has found that the penguins also move in a coordinated wave that makes huddling more efficient. According to Daniel Zitterbart, a Ph.D. student at Germany’s University of Erlangen-Nuremberg, every 30 to 60 seconds a portion of the birds moves 2 to 4 inches, followed by nearby birds, and so on, in much the same fashion as sports fans do a wave. Biologists are not sure how the movement benefits the birds, but presumably it improves blood circulation and also packs the birds more tightly together, increasing warmth and allowing birds to shift periodically from the perimeter to the warmer center.

Are Chimps Behind Colobus Monkey Decline?

Survey data collected over a period of 33 years in the forests of Ngogo in Uganda’s Kibale National Park suggest that unusually high rates of predation by chimpanzees on red colobus between 1975 and 2007 have contributed to an 89 percent decline in the monkeys, which the apes hunt with skillful coordination. Researcher Thomas Struhsaker of Duke University and his colleagues report in the American Journal of Primatology that “the chimpanzee community at Ngogo is the largest ever recorded,” supporting the conclusion that the red colobus decline was caused primarily by chimpanzee predation. This evidence marks the first documented case of one nonhuman primate causing a population decline in another by predation. “We evaluated disease and interspecific competition as other possible causes of the red colobus decline, but judged them to be relatively insignificant compared with predation by chimpanzees,” the biologists wrote. The red colobus, along with the redtail, was one of two dominant monkey species in the area prior to the decline. During the years of the study, chimpanzee sightings have risen 53 percent.

A study of DNA in dusky sharks, led by the Institute for Ocean Conservation Science at Stony Brook University, may give fishery managers a tool for protecting a species that has declined by 80 percent in the western Atlantic, thanks in large measure to Asia’s trade in fins for soup. Genetic data suggest this shark, found along continental coasts worldwide and common along the U.S. Eastern Seaboard and in the Gulf of Mexico as recently as 1990, live in geographically isolated populations, with females breeding in the regions where they were born. Biologists had hoped that dusky sharks from areas of relative abundance might replenish populations that have collapsed, but the DNA data indicate that this scenario is extremely unlikely, says Demian Chapman, the study leader. Because individual dusky females produce young only about every five years, recovery of depleted populations may take centuries. On the bright side: The study suggests that resource managers can use DNA to discover the origin of shark fins sold in Asian markets and thus determine which coastal habitats need intensive protection.