Pretty As a Picture

A photographer visits five continents to capture the beauty and diversity of orchids, among the most adaptable plants on Earth


AS A NATURE photographer, Christian Ziegler has traveled the world making images of some of the planet’s most fascinating creatures, from bats to tree frogs to ocelots and other wild cats. Yet his passion for the natural world started with plants: “As a young naturalist growing up in southwest Germany, I was enthralled with orchids,” writes Ziegler in his new book, Love and Lies in the World of Wild Orchids, which will be published this fall.

Orchids also “were among my first ‘victims’ when I got my first camera at age 20,” Ziegler recalls. Since then, he has visited 14 countries on 5 continents and taken photos of hundreds of different orchid species.

Orchids make up one of the largest and most diverse plant families: 25,000 species that are adapted to an array of habitats, including semideserts, alpine mountains, mangrove swamps, tropical rain and cloud forests and even Arctic tundra. Each year botanists describe some 200 new orchid species, primarily in the Tropics. “It’s not unusual to find 50 or more different species in a single tropical tree crown,” notes Ziegler, a communications associate at the Smithsonian Tropical Research Institute in Panama. 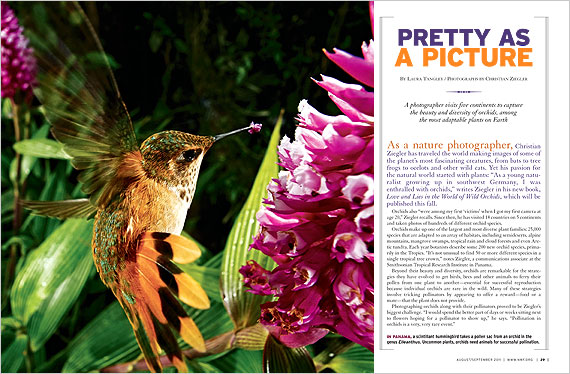 Beyond their beauty and diversity, orchids are remarkable for the strategies they have evolved to get birds, bees and other animals to ferry their pollen from one plant to another—essential for successful reproduction because individual orchids are rare in the wild. Many of these strategies involve tricking pollinators by appearing to offer a reward—food or a mate—that the plant does not provide.

Photographing orchids along with their pollinators proved to be Ziegler’s biggest challenge. “I would spend the better part of days or weeks sitting next to flowers hoping for a pollinator to show up,” he says. “Pollination in orchids is a very, very rare event.”