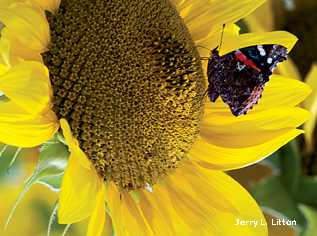 AFTER LABOR DAY, certainly by late September, most people in this country are ready to remove the “in the garden” sign from their front door and button up their flowerbeds for the season. Not so fast! Hummingbirds and a variety of butterflies fly south from their breeding grounds in northern latitudes until as late in the year as December. You can make life easier for these migrants by providing a place for them to rest and to refuel with nectar from native wildflowers.

The epic journeys of 3-inch-long ruby-throated hummingbirds, which summer as far north as eastern Canada and spend the winter as far south as Panama, begin in mid-July and can last until late November. Rufous hummingbirds, which nest as far north as Alaska—farther north than any other hummers—move south along the Pacific Coast to their Mexican wintering grounds. Black-chinned, broad-tailed, calliope, Costa’s and Allen’s hummingbirds fly from their breeding grounds in the Pacific Northwest and Rocky Mountains to warmer climes.

Meanwhile, the fall migration of the monarch butterfly also is underway. The northernmost members of the species in eastern North America leave Canada in late summer. According to Nicole Hamilton of the Loudoun Wildlife Conservancy in Virginia, as many as 85,000 monarchs have been counted in Cape May, New Jersey, between September 22 and November 21. The last stragglers don’t arrive at their overwintering sites in the Sierra Madre Mountains of Mexico until December. Monarchs in western North America travel from as far north as British Columbia to winter along the California coast. Among the other butterflies that undertake migrations of various lengths are the painted lady, red admiral, common buckeye, long-tailed skipper, clouded skipper and cloudless sulfur. A few drifts of fall-blooming native wildflowers in your yard can help make migration a little less arduous for these lovely creatures on the move.

Enticing Wildlife to Your Yard

NWF’s Certified Wildlife Habitat™ program provides gardeners with all of the information they need to create inviting outdoor spaces for birds, butterflies and other animals. To learn more, visit www.nwf.org/nwfgarden.

The Best Blossoms for Fall Migrants

Following are some of the most widely distributed and most frequently visited fall-blooming native wildflowers. Make sure that the plants you choose are native to the region where you live and that they are suitable for your property’s soil and other conditions.

Among the birds’ favorites in the East are cardinal flower, red beebalm, and the native climbers trumpet creeper and coral honeysuckle; in the West, hummers are attracted to scarlet gilia, California fuchsia and late-flowering penstemons.

• Asters: Different varieties of these late-blooming wildflowers are found in all 50 states.

• Goldenrods: Easily identified by their bright golden inflorescences with dense masses of tiny flowers, goldenrods light up the wild autumn landscape in every state. Contrary to popular belief, they don’t cause hay fever—ragweed is the culprit.

• Sunflowers: These wild relatives of the cultivated plants grow throughout much of the lower 48 states. Among the last to bloom are swamp sunflower, common sunflower, Maximilian sunflower and Jerusalem artichoke.