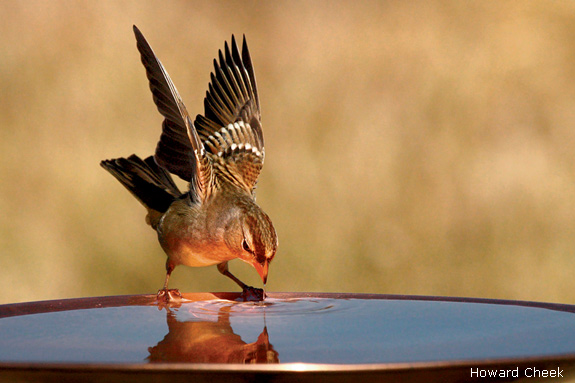 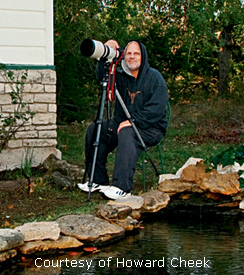 A photographer for less than a decade, Howard Cheek needs to venture no farther than his own backyard to encounter a dizzying diversity of wildlife. “My wife and I live on 6 acres of Texas Hill Country in its natural state,” he says. The property is located along the Central Flyway, a major migratory route for many North American bird species.

To enhance the wildlife value of his yard—an NWF Certified Wildlife Habitat® site—Cheek has planted an assortment of flowers and other native plants in raised beds and built a small pond with a waterfall. The couple also maintains a variety of feeders, nest boxes and birdbaths. In a region often plagued by drought, water may be the most powerful of these attractions. It proved irresistible to this northern cardinal pair (below) that Cheek photographed on a branch beside the pond and to a white-crowned sparrow (above) drinking from a birdbath. Both images were captured without flash during the morning. “I like to use ambient light for a more natural look,” Cheek says. 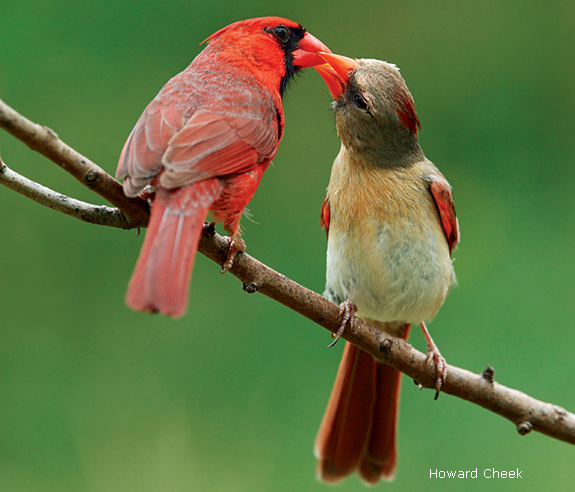 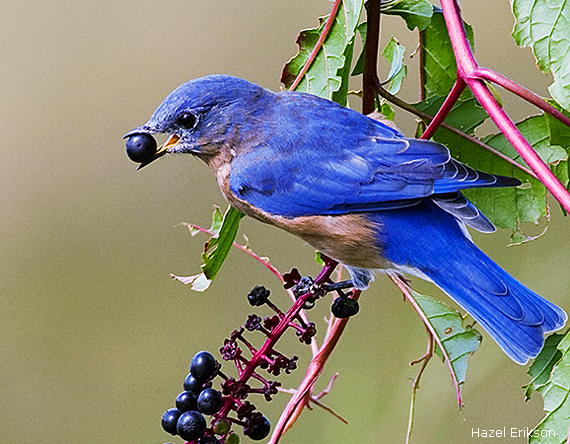 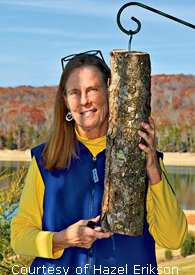 It looks like a case of serendipity: A photographer happened upon a gnarled, lichen-covered tree trunk just as an eastern bluebird alighted to grab a snack. But Hazel Erikson’s striking image was hardly the result of a lucky accident. “It was a set-up,” she explains. After procuring a photogenic log from a neighbor who felled a tree (left), Erikson drilled small holes to hide food (seeds, mealworms and other treats) and hung the log about 4 feet from an open window. Steadying her camera on the sill with a beanbag, she hunkered down inside, remote shutter release in hand, and waited to see what would come along. The action began fast in her wildlife-friendly yard on the shores of Tennessee’s Norris Lake. “When we moved in nine years ago, we didn’t plant grass,” Erikson says. “We let whatever was wild grow, which has attracted a wide variety of birds.” She and her husband also maintain feeders and birdbaths year round.

To see another bluebird photo taken by Erikson—this one with pokeweed as a prop—check out the April/May 2012 issue’s front cover. 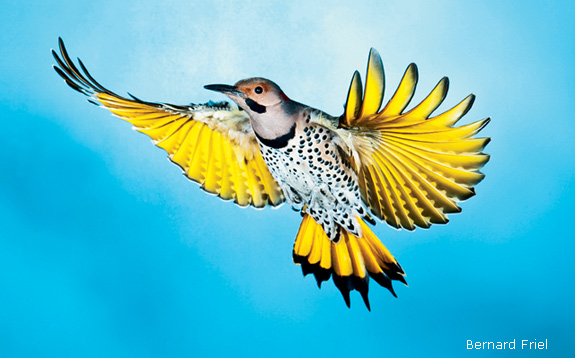 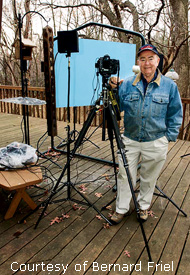 To make this dramatic image of a northern flicker in his Mendota Heights, Minnesota, backyard, Bernie Friel used a complex high-speed flash system that he has relied upon for three decades. “It’s unique because of the extremely short duration of the flash, 1/33,000 of a second, which becomes the effective shutter speed and allows me to freeze birds in flight,” he says. The system consists of four strobe units mounted on light stands, a camera on a tripod, an infrared trigger on a swing stand and a blue background. “When a bird flies through the infrared beam, the camera and flash are simultaneously triggered,” he explains, “and about once every 50 to 100 times it’s triggered, I get an acceptable image.” To attract his subjects, Friel sets up bird feeders. “I once contended that no self-respecting bird would fly to a feeder surrounded by so many pieces of equipment, but to my delight, they do,” he says. It helps that Friel’s property is a welcoming place for birds: It has been an NWF Certified Wildlife Habitat site for the past decade.