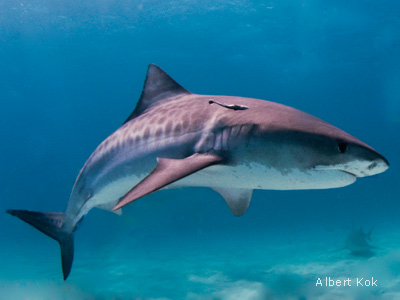 Is The Oil Industry Feeding Sharks?

Biologists at Alabama’s Dauphin Island Sea Lab were surprised recently to discover that Gulf of Mexico tiger sharks (left) are chowing down not just on fish but on songbirds such as tanagers, meadowlarks, catbirds and swallows. “We were not expecting to see this,” says lead researcher Marcus Drymon. “It certainly prompts a series of questions, the most obvious being how does a land bird end up in the water as food for sharks?” The American Bird Conservancy (ABC) suspects that the key factor is the gulf’s 6,000 oil and gas platforms, the lights of which, especially on cloudy nights, attract migrating birds by the hundreds or even thousands and cause them to circle the platforms until they drop into the gulf. A federal study of the problem and solutions to it, such as changes in platform lighting, will be launched in 2013, says Christine Sheppard, bird collisions campaign manager for ABC. 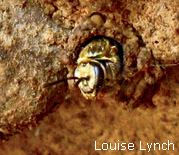 Biologists combing through the bee collections of the American Museum of Natural History have named four new bee species (including Lasioglossum gotham, right) native to New York City, which is home to more than 250 described bee species. “Declines in honeybees and other bees have received a lot of attention in recent years,” says researcher John Ascher of the museum’s Division of Invertebrate Zoology, “but it is not generally appreciated that bee species entirely new to science are still being discovered even within our largest city.” Cornell University post-doctoral researcher Jason Gibbs, who published a paper on the newly recognized species in the journal Zootaxa, adds, “Natural areas like urban parks and rooftop and botanical gardens provide nesting sites and floral diversity that bees need. This little bee [L. gotham] has been quietly living in the city, pollinating flowers in people’s gardens, for years.” Bees are the most important pollinators in the northeastern United States, and nearly a third of the U.S. food supply needs honeybee help to survive. Many more bee species remain to be found. “These new species are just the tip of the iceberg,” Gibbs says.

Look at the Brain on Spidey

New-born Nephila clavipes are tiny spiders—juveniles weigh less than a milligram (0.000035 ounces)—but they need enough mental capacity to weave complex webs. So where is nature going to put the required neural circuitry? “In unusual places,” says William Eberhard of the Smithsonian Tropical Research Institute in Panama. Eberhard and his colleagues have found that the brain of a very tiny spider such as a young N. clavipes takes up nearly 80 percent of the space in the head and thorax and even fills 25 percent of the space in the base of each leg. “Of course, other structures such as digestive tissue are displaced, and tiny spiders may have more difficulty processing enough food to stay alive,” Eberhard says.