The U.S. Farm Bill’s conservation programs are sound investments, yet they’re at risk as Congress considers slashing funding for the law 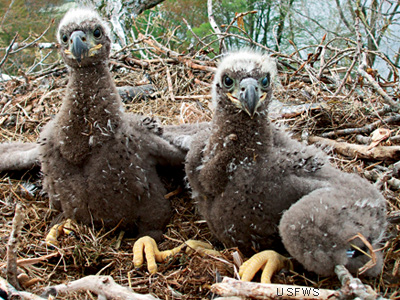 ON A SUNNY DAY IN MAY, Matt Stuber carefully climbs a giant old cottonwood on the banks of Michigan’s Portage River. In a nest high in the gnarled branches, he finds his quarry—two gray-brown balls of down and fluff with sharp beaks and fierce yellow talons. Bald eagle chicks. The nestlings are living symbols of a remarkable resurgence of the species, once almost wiped out by DDT in the 1960s. “This is the first successful nest we know of in Jackson County, Michigan, since the bad old days,” says Stuber, a biologist with the U.S. Fish and Wildlife Service.

The eaglets also are the poster chicks for another story: the need for federal farm conservation programs. The cottonwood tree that holds their nest stands in a wetland created by one such program. Meanwhile, other efforts are helping farmers reduce the nutrient pollution in rivers and lakes, improving the environment nationwide. Yet these U.S. Farm Bill programs are themselves endangered. In its quest for deficit reduction, Congress has proposed slashing more than $1 billion from the law’s $6 billion annual farm conservation budget. Even larger cuts are possible. With high prices for corn and growing demand for corn ethanol, many members of Congress argue, there is far less need for a Farm Bill program that pays farmers to take fields out of production and put them into so-called conservation reserves. “The situation is grim,” says Julie Sibbing, NWF director of agriculture and forestry programs.

That’s why environmental groups are arguing that Farm Bill conservation programs are essential, but they’re not lobbying just for money. They’ve also realized the programs could be improved, getting more environmental—and economic—bang for each taxpayer dollar. With Congress now questioning all federal spending, “we have a unique opportunity to reshape the Farm Bill,” says Gildo Tori, policy director for Ducks Unlimited’s Great Lakes region office. “We can do it in a more innovative way.”

How? Consider first the eaglets’ story. The wetland where they hatched once was enormously productive farmland. But cheap vegetables from California and periodic floods had made it hard for owner Tom Bury to make a living growing onions and other crops. So he enrolled most of his 500 acres in the Farm Bill’s Wetland Reserve Program, which pays farmers to take flood-prone fields out of production and restore them as wetlands. Bury dug out the tile drains and planted prairie grass. “It was just amazing what it looked like after just one year,” he says. Almost magically, the fields became a rich landscape of grasses, cottonwoods and seasonal ponds teeming with aquatic plants and creatures like muskrats, mink, otters—and, now, eagles.

Other farmers in this south-central region of Michigan used Farm Bill conservation programs to protect more than 2,400 acres along the Portage River. Combined with an adjacent Audubon wildlife sanctuary, these restored wetlands have become a boon to local wildlife—and a key staging area for waterfowl. “This is a farm program that is doing exactly what it is supposed to be doing,” says Lathe Claflin, the sanctuary director.

Even more important: The benefits go far beyond better habitat for wild critters. Participating farms no longer need taxpayer bailouts because there are no crops to lose. The ponds and marshes absorb floodwaters, reducing flood damage—and federal crop insurance payments to flooded farmers.

The wetlands also gobble up nutrients such as phosphorus from fertilizers, reducing blooms of toxic algae downstream in rivers and lakes. Beaches are cleaner and safer. Fishing is better. Water treatment plants spend less money. Tourism and other industries get a boost. In fact, tour companies are busing in bird-watchers to Jackson County from as far away as Canada to see the flocks of sandhill cranes. “These programs are beneficial beyond their effect on the environment,” says economist June Moss at the U.S. Department of Agriculture’s Natural Resources Conservation Service (NRCS). “They also create jobs.”

Similar benefits can be seen across the country as farmers from New York to California use Farm Bill money to set aside land, create buffer zones that keep nutrient pollution out of creeks, improve their manure storage and fertilizer use, and plant trees that protect fish habitat and reduce flooding. “We could be spending a lot more, and it would pay for itself,” says Ohio NRCS conservationist Steve Davis.

Yet despite these success stories, farms still are the main source of the nutrient pollution spilling into creeks, rivers, lakes and coastal waters, causing massive algal blooms that close beaches, kill fish and hurt local businesses. It is a crisis that is getting worse, not better.

So why haven’t the Farm Bill conservation programs been more effective? The main reason: They don’t reach the right farmers. Studies show that most of the pollution comes from a small percentage of farms—those that don’t typically sign up for the programs. “Getting people to participate in the programs is a problem,” explains Roger Knight, Lake Erie fisheries administrator for the Ohio Department of Natural Resources.

Fortunately, there are clever solutions. One idea is to tie farm subsidies to conservation. In order to receive price supports or crop insurance, farmers would have to protect wetlands or reduce the runoff of nutrients. Another is to deny crop insurance for new fields created by destroying habitat, thus making farmers bear the risks of cultivating marginal land. And still another is to actually measure levels of pollutants in streams to spot the problem farms—and then to work cooperatively with those farmers to fix the problems.

The approach works. An innovative pilot project in Wisconsin first proved that a small percentage of the farms were responsible for more than half of the phosphorus in the Pecatonica River. The project found simple solutions that farmers were willing to implement, using federal conservation dollars. For instance, planting rye on fields right after the corn harvest “not only keeps water, soil and nutrients in place, it also provides an economic benefit to farmers,” says Steve Richter, The Nature Conservancy’s director of conservation for southwest Wisconsin. “It’s been a real eye-opener.”

Such successful examples offer environmental groups a powerful message to take to Congress as lawmakers consider funding for the next version of the Farm Bill, says Sibbing: “Farm conservation programs targeted to the real problems are not a drain on the U.S. Treasury, they are a productive investment in America’s environment and economy.”

Keeping Wildlife Down on the Farm

Some of the nation’s most successful voluntary conservation programs take place under the U.S. Farm Bill, and NWF is actively involved in efforts to maintain those programs as Congress debates reauthorization of the law.

“With the increasing demands we are putting on our farmland to produce food, fiber, feed and fuel, conservation shouldn’t be an afterthought, it should be a priority,” says Julie Sibbing, NWF director of agriculture and forestry programs. “We are working to convince Congress that an investment in conservation not only makes our water cleaner, our wildlife more abundant and our food production more sustainable, it also saves both farmers and taxpayers money.”

As part of that effort, NWF recently released a report, Future Friendly Farming: Seven Agricultural Practices to Sustain People and the Environment. For more information, including the report, visit www.nwf.org/farmbill.

Writer John Carey is based in Virginia.