Education: Not the Same Old Schoolyard 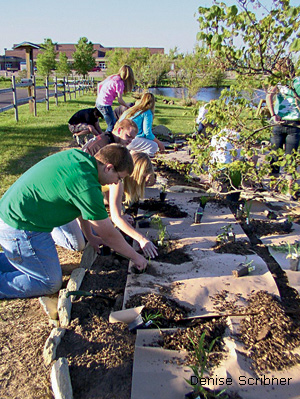 THE GROUNDS OF GODDARD HIGH SCHOOL, near Wichita, Kansas, feature 3.2 acres of restored native prairie, 1.7 acres of wetland, an outdoor classroom and a 20-station nature trail that highlights plants, animals and local conservation issues. Used also by students from elementary and middle schools, the site is designed for environmental education but provides opportunities for instruction beyond science. For example, art students developed ceramic sculptures of native grassland species for display on the nature trail, and a math class learned about triangulation while installing a bat box.

“Our site offers hands-on research that students can do,”  says Marylee Ramsay, a Goddard ecology teacher who leads a student project that involves monitoring small mammals on the site. “It helps them understand the scientific process and what that entails. It’s real life and immediate.”

Goddard High is a certified unit of the NWF Schoolyard Habitats® program, launched in 1996 to help educators use school grounds as cross-curricular learning sites for wildlife conservation and gardening with native plants. NWF donor contributions of $165,000 annually help to provide teacher resources and materials. “The Schoolyard Habitats program fosters a greater sense of environmental stewardship among youth,” says Erin Ramirez, a doctoral candidate at Virginia’s George Mason University and an NWF intern studying the effects of these sites on students.

NWF designed the program for children of all ages, from day-care and preschool students to high schoolers, as well as parents, university students, teachers, administrators, community members and volunteers. Certified schoolyards are located at more than 4,000 schools in all 50 U.S. states and two territories.

To earn NWF certification, schools have to develop the four indispensable elements of habitat—food, water, cover and places for wildlife to raise their young—and use the site as an educational resource. Many schools complete successful projects just by building planter boxes and adding feeders, birdbaths and other items to asphalt playgrounds or even on roofs. Some urban schools remove sections of asphalt to create new planting areas.

Research indicates that Schoolyard Habitats projects expand student education. A study of the program in Houston, Texas, published in 2008 by HortTechnology, a journal of the American Society for Horticultural Science, reported that “students participating in the [program] had significantly increased math scores when compared with peers in schools that were taught using a more traditional curriculum.” A 2004 study published in Environmental Education Research found that students at schools with an environmental-education component scored higher on standardized math, reading and writing tests, a pattern that persisted for five years.

Students also benefit in less tangible ways. The Schoolyard Habitats program at Blackwater Community School in Arizona’s Gila River Indian Community, home to Pima and Maricopa Indians, includes a habitat for desert tortoises. School counselors sometimes take students to watch the tortoises, an activity that seems to have a soothing effect on the children, says Jacquelyn Power, Blackwater’s principal. The school’s cultural instructor also uses the tortoises in lesson plans, because the reptiles are important in Pima culture. “So the habitat is an active part of our campus,” Power says. “I see the kids have a much greater interest in science, language and culture, which contributes to the school’s success in academic achievement.” Last year, Blackwater was named the National Title 1 Association’s Distinguished School of the Year among Arizona schools.

Urban schools benefit from the NWF program as well. The “Enchanted Garden” habitat at John F. Kennedy High School in New York City’s Bronx borough covers nearly an acre and was the offspring of the student Environmental Club in 1996. “Some students found employment through the program, some grew food they ate, and for some it is just an opportunity for creativity,” says Paula Edlavitch, a chemistry teacher and faculty advisor to the Environmental Club. Participants, most of whom live in apartments, also enjoy a dimension new to their lives. “They look at it as the backyard they don’t have,” founding faculty advisor Anthony Thoman told the Riverdale Press when the project was in its 10th year.

Schoolyard Habitats also broaden educational opportunities for students by allowing them to become part of the Eco-Schools program, an internationally acclaimed project started in 1994 by the Foundation for Environmental Education with support from the European Commission. The Eco-Schools program is being implemented in 47 nations, involving 30,000 schools, 8 million students, 400,000 teachers and 4,000 local authorities. Since 2008, NWF has served as the official host of Eco-Schools USA, which now has more than 700 participating schools with 300,000 students ranging from kindergarten to high school seniors.

Through the Eco-Schools USA program, schools like Goddard High can network and share data across the globe, creating a platform for cultural exchange and improved language skills. “We like Eco-Schools because it gives national recognition to what we’re doing here,” says Goddard, Kansas, environmental science teacher Denise Scribner. “Kansas has been a leader in making its high school students environmentally literate.” Several students involved in the Goddard program are preparing for careers in environmental science and wildlife management, she says.

In the end, the value of the program is its effect on students. “They love it,” says Goddard High’s Ramsay. The project gives urban children a chance to work in nature, “so it’s a new experience for them,” she says. “They like to go out and get their hands dirty. I think the program is limited only by the teacher’s imagination. Even if students are just sitting in the grass thinking, it changes their perception.”

Through the NWF Schoolyard Habitats® program educators are taking a stand to get children outside, improving student aptitude for learning.