NWF View: In Defense of Wildflowers

Wildlflowers are losing the battle against climate change and feral hogs 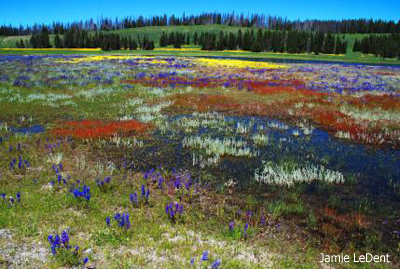 “Those who contemplate the beauty of the earth find reserves of strength that will endure as long as life lasts. There is something infinitely healing in the repeated refrains of nature—the assurance that dawn comes after night, and spring after winter.”

–Rachel Carson, The Sense of Wonder

I HAVE LONG BEEN FASCINATED by the biological richness of western Pennsylvania and, like Rachel Carson, I find reserves of strength in the beauty and renewal of nature. As a boy, I had the good fortune to know Roger Latham, then the outdoor editor of the Pittsburgh Press. A well-recognized wildlife scientist, he gave wonderful wildflower presentations that included the many graceful images he had captured on film.

Roger’s passion for native wildflowers hooked me. I saved my money from milking cows and baling hay on a nearby farm and bought a 35-mm camera and proper lenses to photograph blossoming plants. Armed with the two-volume Wild Flowers of Western Pennsylvania and the Upper Ohio Basin, I went on a spring mission to find the rare beauties that dotted the varied landscapes. Since Pennsylvania has 2,151 native plant species, I had my work cut out for me.

Years later, while working for the Pennsylvania General Assembly, I thought about these wildflowers when I discovered a flaw in the U.S. Endangered Species Act: The law prohibits destruction of federally listed plants only in “areas under federal jurisdiction.” Unfortunately, more than 70 percent of federally listed plants occur outside those areas. In response, I wrote a bill in 1974 that extended protection to Pennsylvania’s threatened and endangered plants against bulldozers and other threats beyond federal lands. For the next eight years, I followed in Roger’s footsteps, crisscrossing the state and giving presentations to hundreds of garden clubs, civic groups and sportsmen’s organizations to rally support for the measure, which finally was signed into law by the governor in 1982.

I share this story because wild native plants in Pennsylvania and throughout the nation increasingly are falling victim to habitat shifts caused by rapidly changing climate and, in many areas, by feral hogs introduced to North America from Europe.

Feral swine populations are exploding around the country. Now estimated at more than 5 million, the animals are eating, rooting and wallowing their way through forests, fields and wetlands, aggressively devouring and destroying native plants and damaging important wildlife habitats. Invasive swine also are causing millions of dollars in damage to agricultural crops and are threatening humans, native wildlife and livestock, which can be impacted by novel pathogens that the feral creatures may transmit.

At NWF’s annual meeting in May, delegates from 48 state and territorial wildlife affiliate organizations passed a resolution to draw attention to this growing problem. Because existing laws, regulations and management tactics have proved insufficient to stop the spread of swine populations, we are calling for increased coordination between local, state and federal agencies to minimize the animals’ impact and contain their numbers. Authorities need to give more attention to the possible role of large predators and other control strategies. Farmers, ranchers and hunters also can do their part.

It is a fool’s errand, of course, to think that we can somehow eradicate 5 million hogs from all of the nation’s swamps and forests. But with some thoughtful resource management and collaboration, much of the damage caused by the creatures can be reduced or avoided in the future.

More than anything, we need a proactive approach for dealing with such alien invaders. NWF has long been a proponent of legislation that would help protect the nation from the economic and environmental threats posed by invasive species. Recently introduced into the U.S. Congress, H.R. 5864, the Invasive Fish and Wildlife Prevention Act of 2012, would strengthen regulators’ ability to make rapid, science-based decisions about whether nonnative fish or wildlife species pose a risk to ecosystems, cause economic damage or threaten public health. The legislation also would prevent more damaging invasives from entering the United States, using proactive rather than reactive approaches.

As the world globalizes trade, we must take steps to end accidental and intentional imports of nonnative fish and shellfish in bilgewater. We should restrict imports of exotic animals as pets, and we must end the introduction of foreign species for commercial hunting and fishing. Working together, we must call on Congress to pass protective legislation, and we must mobilize action at the local level to contain the exotic invaders that already are thriving in our nation.

Help NWF fight the threats of invasive species by telling Congress to support the Invasive Fish and Wildlife Act of 2012.