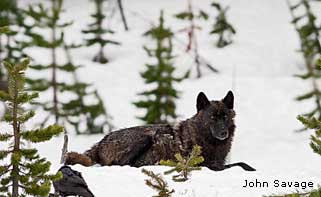 A new review of recent ecological studies indicates that the decline of large animals at the top of their food chain, caused largely by human activity leading to habitat loss, has had far-reaching consequences, including changes in vegetation, wildfires, water quality and the spread of infectious disease. “The loss of apex consumers is arguably humankind’s most pervasive influence on the natural world,” the study concludes.

The biggest population declines have been in big predators, such as wolves on land and sharks in the sea, but species such as elephants and bison also have dropped from millions to a few thousand during the past century and a half. These species “have diverse and powerful effects on the ways ecosystems work, and the loss of these large animals has widespread implications,” says James Estes, an ecologist at the University of California–Santa Cruz. In the study, published in Science last July, he and 23 colleagues cite how the extirpation of wolves in Yellowstone National Park contributed to destruction of aspens and willows by uncontrolled elk populations as an example of how apex consumers affect ecosystems. More data are needed to understand these effects but, Estes says, “To the extent that conservation aims toward restoring functional ecosystems, the reestablishment of large animals and their ecological effects is fundamental.”

Snakes that go months between meals, such as Burmese pythons and rattlesnakes, save energy by reducing the size and function of vital organs, including the heart, stomach, liver and kidneys, while fasting. “Snakes are specialists in conserving energy,” says Todd Castoe, a biologist at the University of Colorado School of Medicine. After eating, however, the reptiles “have to rapidly ramp up everything,” Castoe says, because the reduced organs are essentially useless for digestion. Within 48 hours of a meal, the organs increase by 35 to 100 percent and will remain enlarged for the time it takes to digest the prey, perhaps two weeks, before again shrinking. New research by Castoe and his colleagues has established that this growth requires switching on some 1,800 dormant genes in the heart alone—almost 10 percent of the snake’s 20,000 genes—boosting metabolism by 40-fold within 48 hours. This metabolic jump is among the greatest of any vertebrate species.

Recent experiments with Pallas’s long-tongued bat, which feeds on plant nectar and uses echolocation to find blossoms, indicate that the dish-shaped leaves of the Cuban rain forest vine Marcgravia evenia reflects bat signals in a loud and very conspicuous way. This increased echo, says lead researcher Ralph Simon, a biologist at Germany’s University of Ulm, helps the bats find the flowers more easily and increases vine pollination. Although the study focused on one bat species, “the echolocation behavior of all nectar-feeding bats is quite similar,” Simon says, “so the echo signal of the dish-shaped leaves should be receivable for all nectar-feeding bats.” Such bats make several hundred visits nightly to flowers and eat 100 to 150 percent of their body weight in nectar.