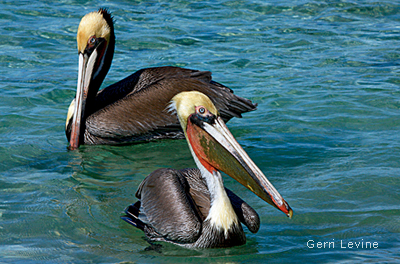 Many of National Wildlife Federation’s most important conservation initiatives would not get off the ground without your support. Here are just a few of our successes this past year—with member contributions:

• Bobcat Creek Habitat Unit Retired—$10,000: NWF members helped retire a grazing allotment on 1,291 acres of vital prairie habitat on the Bobcat Creek Habitat Unit, located in Montana’s Charles M. Russell National Wildlife Refuge. As a result, wildlife such as pronghorn, elk, mule deer and sharp-tailed grouse no longer will have to compete with livestock for forage and cover. To date, NWF members have helped retire more than 620,000 acres of habitat in Montana, Wyoming and Idaho via the Adopt-a-Wildlife-Acre program.

• NWF volunteers restore Gulf Coast habitat—$50,000: More than a year after the tragic Gulf oil disaster, NWF—along with our volunteers, affiliates and other partner groups—is still on the ground in the region, working on restoration projects. In Alabama, some 500 volunteers helped build a quarter mile of oyster reefs. Other efforts include reseeding vital wildlife grass and marshes, preparing dunes on barrier islands for nesting season and planting mangrove trees. These efforts have helped safeguard several species, including brown pelicans and bottlenose dolphins.

• Safeguarding sea turtle habitat—$25,000: Your support helped achieve an important legal victory for sea turtles against a controversial federal program that promoted development in vital nesting habitat in U.S. coastal areas. Now, the Federal Emergency Management Agency will be required to consult with wildlife agencies regarding the impacts of the National Flood Insurance Program on the imperiled reptiles.

• Protecting bighorns in Idaho—$12,000: Together with the Idaho Wildlife Federation and Nez Perce Tribe, NWF is working to protect bighorn sheep by developing solutions that prevent contact in certain areas with domestic sheep, which can transmit disease to bighorns. This often hinges on cooperation with ranchers who have leased grazing allotments on public lands. Last spring, NWF successfully advocated for greater protection of bighorn habitat in Idaho’s Payette National Forest. The result: The U.S. Forest Service announced a decision to close areas of the forest to domestic sheep where grazing conflicts exist—a huge win for wild sheep, which have been declining in numbers in parts of the West.

• Greening the nation’s schools—$100,000: More than 680 K-12 schools across the country, representing 420,000 students, are participating in NWF’s Eco-Schools USA program. With support from NWF members, the Federation works with educators and administrators to integrate sustainable practices in K-12 schools. This year, NWF also awarded its first Green Flag awards to schools in the program that have completed an advanced certification process, ensuring environmentally sound operating procedures.

An NWF partnership with federal, state and other organizations was honored with the U.S. Department of the Interior’s prestigious Partners in Conservation Award for Scanning the Conservation Horizon: A Guide to Climate Change Vulnerability Assessment. This guide helps natural resource managers prioritize conservation efforts in response to climate change.

Lake Norman in western North Carolina is the 55th NWF-certified Community Wildlife Habitat® and the first to include all the towns surrounding a lake. Spanning four different counties, Lake Norman is 34 miles long and has more than 520 miles of shoreline and nearly 100 islands. The community surrounding this man-made lake has eight towns with a population of 188,000 people. Its 300 homes, 11 schools, four parks, golf course, hospice center, elder care center, three businesses and six farms became NWF Certified Wildlife Habitat™ sites.

The Lake Norman Wildlife Conservationists, a chapter of the North Carolina Wildlife Federation, led the Wild Over LKN! community certification project. The organization reached out to residents and community groups to educate them about gardening for wildlife and sustainable practices and led projects that offered benefits to wildlife, such as building osprey and turtle-basking platforms. It also partnered with several companies and businesses to achieve this large community habitat certification.

“The Wild Over LKN! project is a great success. The people who live in these eight towns obviously really care about the health of the lake and its wildlife to unite for this cause,” says Roxanne Paul, NWF’s senior coordinator of Community and Volunteer Outreach. 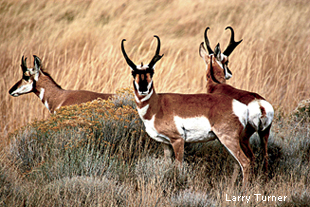 According to a recent NWF Report populations of mule deer and pronghorn are declining on both sides of the Colorado-Wyoming border, and the animals may not be able to fully recover unless federal and state agencies act to protect core habitats. The study was prepared by veteran wildlife biologists John Ellenberger and Gene Byrne, who analyzed statistics collected during the past 30 years by wildlife managers and the U.S. Bureau of Land Management (BLM).

“The information we analyzed clearly shows steady population declines in both states for many deer and pronghorn herds,” says Ellenberger. The scientists found a correlation between growing demands on the region’s landscapes—including increased energy development—and both decreasing wildlife numbers and reduced ability of the animals to rebound from such cyclical pressures as drought and disease.

BLM has management responsibilities for areas that stretch across state lines in the region. “The needs of wildlife over the entire landscape must be fully factored in before permits for energy development or other human activities are granted,” Ellenberger says.

Is your child falling asleep in class? The solution may be as close as the backyard.

Spending time outdoors can help, as natural light regulates the body’s internal clock so that children are more alert during the day and tired at night. Natural, green settings are relaxing and calming and can improve cognition. Outside exercise develops better motor skills and encourages creativity. The result, says the guide, is a child who is “less cranky, can concentrate better and is calmer and more productive.”

“Part of having a well-rested child involves trading some screen time for green time,” says Kevin Coyle, NWF vice president of Education and Training and author of the guide.

Who knew that Michigan’s Huron River needed a wolf pack to help restore it? NWF and a group of community leaders did. This past August, they launched RiverUp!, an initiative that began as a conversation with Representative John Dingell (D-MI) two years ago and now aims to “FixUp!,” “CleanUp!” and “BuildUp!” 105 miles of watershed along Michigan’s Huron River.

NWF’s Wolfpack RiverUp! coalition is a group of 75 business and community leaders and organizations, including NWF’s Great Lakes Office, the Michigan League of Conservation Voters, the Huron River Watershed Council and Representative Dingell.

The launch featured several RiverUp! projects under way that are intended to heal the ecology of the river while drawing patrons and recreationists: an improved portage around a dam; greenways for biking and hiking; a Huron River Water Trail linking portages; and a cleanup of an abandoned industrial site. Of the $2 million needed, $80,000 has been donated and more than $100,000 in additional private funding has been pledged.

“RiverUp! will turn the face of southeast Michigan communities toward the river, leading to a healthier ecology and a more vibrant economy,” says Andy Buchsbaum, director of NWF’s Great Lakes office.

“The Indian Nations face profound challenges to their cultures, economies and livelihoods because of climate change,” says Jose Aguto, policy advisor on climate change for the National Congress of American Indians. This and several other American Indian organizations, NWF and the University of Colorado Law School coauthored Facing the Storm: Indian Tribes, Climate-Induced Weather Extremes, and the Future for Indian Country.

This report explains that as many American Indians depend heavily on natural resources, they are particularly vulnerable to climate change and related extreme weather events that deplete those resources. It outlines several climate change consequences with which the 3.2 million American Indians are struggling to cope. Extreme heat and droughts are drying up freshwater sources, damaging crops, depleting traditional wild foods such as roots, berries and salmon, and weakening trees. Since the mid-1980s, rising temperatures have increased the number of wildfires four-fold. About 18.6 million acres on the 326 U.S. reservations are forested. Meanwhile, heavier rains and snowfall, melting snow packs and sea ice, and rising sea levels are flooding Native American homes and communities, including more than 200 Alaska Native villages.

Facing the Storm asks the U.S. Congress to increase funding for tribes so they can more effectively conserve natural resources. The report also calls on tribes to use their own knowledge to plan for climate change impacts.

NWF partner Our Natural Resources (ONR) has already helped American Indians work toward these goals by developing a national tribal natural resource strategy. ONR is an alliance of more than 30 tribes and tribal natural resource organizations as well as NWF, the only nontribal entity. Garrit Voggesser, senior manager of NWF’s Tribal Lands Program, says this is “a testament to the unique role NWF has played as a nonprofit in partnering with tribes on natural resource conservation.”

The Return of a Prairie Monarch 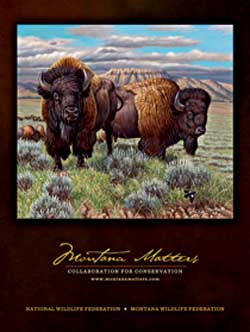 Give an NWF Membership

Need a holiday gift idea that will be valued all year? Give an NWF membership and the recipient will get National Wildlife magazine delivered every other month plus other gifts.

Renew your membership online and you can continue your support of NWF conservation efforts, get National Wildlife magazine and receive a free penguin blanket.