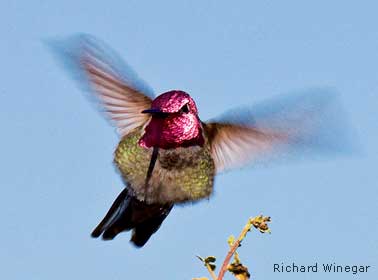 The Hum of the Hummingbird

Hummingbirds get their name from the sound produced by their rapidly beating wings, but another sound wins the hearts of female hummingbirds. A new study that focused on 14 hummingbird species reports that at high velocity, different tail-feather designs give off different sounds. Males make these sounds during high-speed courtship flights put on to attract females. In some species, only a single tail feather produced the alluring notes, while in others all tail feathers chorused together. The Anna’s hummingbird, a common species of the U.S. Pacific Coast and Southwest, produced a sound that could be heard across the length of one and a half football fields. The vibrations are species specific and may even provide females with clues about the fitness of individual males, says Christopher Clark, a biomechanics expert who conducted the study with colleagues from Yale and the University of California–Berkeley. “I know that in many species, the faster the male goes, the louder the sound,” he says. “So the feather sounds might indicate how good, which is to say how fast, a male is diving.”

Sticking to the Enemy

A carpenter ant from Borneo, Camponotus cylindricus, squeezes itself against a larger enemy, causing its own abdomen to burst and covering the bigger ant with a yellow secretion that glues the two together, killing both. All 10,000 ant species possess jaw glands that release defensive chemicals, but C. cylindricus has the largest known, extending into the abdomen, according to new research by Johan Billen of Belgium’s Catholic University of Leuvin and his colleagues. Glue-spewing ants die but help to protect their nests and territories.

The European tawny owl comes in two colors: gray and brown. A new study by Patrik Karell of Finland’s University of Helsinki, based on 28 years of records from banded owls as well as data from the Finnish Museum of Natural History dating to 1890, indicates that Finland’s tawny owl population historically was composed of 70 percent grays and 30 percent browns. Scientists speculate that the grays predominated because they blend better into the gray and white landscape of winter forests, resulting in higher breeding success for gray birds. But Karell’s research suggests that a shift in recent years has made the population half gray and half brown, apparently because the brown owls are better camouflaged in the less-snowy forests produced by a warming globe. This study stands among the first to show that climate change is altering the frequency of an inheritable trait. Long-term effects on the species are still being explored.