We see red on Valentine's Day, and there may be good biological reasons for doing so 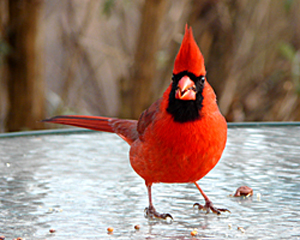 RED IS THE THEMATIC COLOR OF VALENTINE'S DAY, which may be more than a random ornamental choice. Studies since 2005 indicate that humans see red as a color of dominance or adeptness. Sport teams with red uniforms are perceived as more formidable by both fans and rivals. In competitions ranging from hockey to karate, from wrestling to boxing, red uniforms can be a significant factor in determining who wins in contests between evenly matched teams or individuals, according to research by British anthropologists Russell Hill and Robert Barton of the University of Durham.
In an analysis published last year, Dartmouth University researcher Jerald Kralik and his colleagues found that during the 2004 Olympics, athletes wearing red won more often than did those wearing blue, especially in one-on-one contests such as wrestling.

Red, say biologists studying the color, is the shade of dominance and warning among nonhuman animals, too. In one study, rhesus macaques avoided people wearing red tee shirts and caps, but approached people in green or blue. Biologists have learned that red coloration on the faces and rumps of male mandrills—large African monkeys—gives them an advantage in attracting mates. Moreover, red plastic rings attached to the legs of male zebra finches increase their dominance.

So on Valentine’s Day, stick with tradition and go for the red.