How National Wildlife Federation is Making a Difference 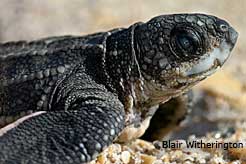 Your Dollars at Work: Reducing Risks in U.S. Floodplains

NWF has been committed since the early 1940s to stopping development in sensitive areas prone to flooding. People who hold mortgages from federally insured or regulated lenders are required by law to have flood insurance, which private insurers often are unwilling to provide. So in 1968 Congress created the National Flood Insurance Program, housed in the Federal Emergency Management Agency (FEMA).

Today nearly 20,000 U.S. communities participate in the program, which, through its subsidies, encourages coastal and floodplain development that inevitably will burden taxpayers with costly, repetitive insurance claims while causing habitat destruction. In recent years, high-risk properties have accounted for more than $35 billion in claims.

NWF has devoted special attention recently to measures designed to ensure that FEMA provides flood insurance only when proper safeguards for wildlife and habitat are in place. Among the successes:

• NWF and its partners in 2009 won a series of court cases requiring FEMA to ensure protections of wildlife and habitat in two flood zones proposed for development. These cases benefit endangered Key deer in Florida and dwindling orca and Chinook salmon populations in Washington’s Puget Sound.

•  NWF stopped a U.S. Army Corps of Engineers project in the Mississippi Delta that would have drained 314 square miles of wetlands and bottomland forest, and the Federation continues to block a Corps levee project in southeast Missouri that would close off one of the last Mississippi River floodplains.

•  NWF has partnered with taxpayer groups and other organizations to create SmarterSafer.org, a coalition committed to reforming the federal flood insurance program. SmarterSafer.org has since successfully defeated schemes that would have expanded federal insurance subsidies and has helped advance a flood insurance reform bill through the U.S. House of Representatives.

“NWF advocates a range of new federal, state and local policies that reduce the risk to people and wildlife and that discourage developments that are sure to flood and to cost taxpayers money,” Kolton says.

NWF’s current efforts to reform the federal flood insurance program and protect floodplains—and the wildlife that depend on them—could not succeed without your support. In fiscal year 2011 alone, NWF members contributed some $90,000 to these efforts.

The National Aquarium in Baltimore, Maryland, and New Hampshire Audubon in Concord are NWF’s newest state affiliates, bringing the total number of affiliates to 48. Learn more about all of NWF’s affiliates at www.nwf.org/affiliates.

No More Drilling In The Dark

Amid growing concern over increased use of the drilling process known as hydraulic fracturing—or “fracking”—NWF last fall issued No More Drilling in the Dark: Exposing the Hazards of Natural Gas Production and Protecting America’s Drinking Water and Wildlife Habitats. While the report acknowledges that natural gas will remain part of the nation’s energy future, gas extraction is proceeding too quickly, it says, before sufficient environmental safeguards have been established.

The report makes a number of recommendations to reduce fracking’s threats to air, water and wildlife habitat. They include: eliminating industry loopholes and exemptions from laws such as the Clean Water Act and Safe Drinking Water Act; safeguarding parks, tribal lands and other special areas; and encouraging greater public involvement in regions where natural gas drilling is occurring or under consideration.

“Transparency, sensible oversight and reliable safeguards for air, water and wildlife are just common sense when it comes to drilling for natural gas,” says Todd Keller, NWF’s senior manager for public lands campaigns. “What should be best practices for the industry are also what is best for local communities and wildlife habitat.”

Conservation Found to be a Bargain

In October, a month before a special congressional committee’s deadline to produce its deficit-reduction plan, NWF released Conservation Works: How Congress Can Lower the Deficit and Protect Wildlife and Public Health. The report argues that conservation programs already have been disproportionately slashed from the federal budget and that further cuts would have a devastating impact on more than 6 million jobs supported by the outdoor recreation industry. This industry also contributes $730 billion to the economy and delivers $49 billion in tax revenue.

Critical conservation programs are at risk nationwide, notes the report. They include State Wildlife Grants that have helped bring back nearly extinct species, Clean Air Act grants that have improved air quality in once-heavily polluted cities, and Clean Water and Drinking Water State Revolving Funds that provide safe water for people and wildlife from coast to coast. “Investments in conservation programs are a great bargain, accounting for just 1 percent of federal spending but delivering huge benefits to all Americans,” says NWF Senior Vice President Jeremy Symons. 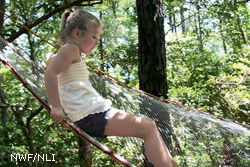 NWF’s Be Out ThereTM campaign, the Natural Learning Initiative (NLI) at North Carolina State University, the U.S. Fish and Wildlife Service and other national partners are stimulating children’s interest in the environment while improving their bodies and minds through playspaces—backyards, playgrounds and outdoor learning environments—that incorporate nature.

“Studies have shown that exposure to nature and green spaces can provide benefits such as reduced obesity, better sleep habits and increased attention and learning abilities,” says NWF State and Local Education Policy Director Allen Cooper, who is coordinating the project.

Last summer, the organizations launched a successful pilot playspace at the North Carolina Gateway Visitor Center, which used temporary structures such as fishing nets tied between trees and a “bear den” built out of logs. In April, NWF and NLI will launch a model backyard playspace in Charlotte, North Carolina, followed by another in Washington, D.C.

As part of this Natural Play and Learning Area Guidelines Program, the organizations are developing guidelines for the design and management of natural play areas in backyards as well as at public sites.

Photographers 13 and younger, submit your wildlife images to Ranger Rick’s free photo contest “Your Best Shots.” Winners may be featured on the website and in the magazine.

Learn about animals with extraordinary capabilities through fun activities during National Wildlife Week, March 19 to 25, 2012, at www.nwf.org/wildlifeweek.

NWF helped bring the wide-reaching efforts of a North Carolina college professor to foster innovative sustainable transportation technologies and green jobs to the attention of the White House this past November.

Richard Cregar, an automotive systems technologies instructor at Wake Technical Community College in Raleigh, is now among the White Houses’s weekly “Champions of Change.” Cregar has been instrumental in advancing green workforce skills by teaching his students and sharing his knowledge with a network of North Carolina colleges.

Wake Tech is one of 20 institutions that have received grants from the Greenforce Initiative. This NWF and Jobs for the Future partnership, sponsored by Bank of America, advances clean-economy workforce education at more than 100 community colleges in Illinois, Michigan, North Carolina, Texas, Virginia and Washington State. Winning projects range from ways to green campuses and promote green jobs to innovative solutions to climate change. 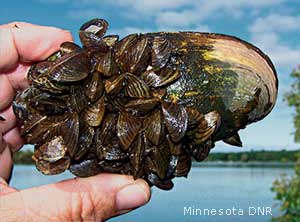 A one-two punch of invasive mussels and farm-runoff pollution is causing some of the most dramatic changes to the Great Lakes in decades.

Nutrients from animal manure, fertilizers and overflowing sewers are seeping into the lakes, causing toxic algal sludges to bloom. As the algae die and decay on lake bottoms, they suck oxygen out of the water, forming dead zones in which aquatic life cannot survive.

Meanwhile, the algae are feeding trillions of voracious, invasive quagga and zebra mussels, transported via ship ballast water in the late 1980s. These mussels consume food in offshore waters, starving aquatic organisms and fish. They also can serve as “ecosystem engineers,” altering the structure of lake habitats, and attach to the shells of native mussels and crustaceans, eventually killing them.